Rouhani Offers Chance for Turkey, Too

Better relations with Iran could relieve some of the pressure on Ankara caused by the Syrian war. 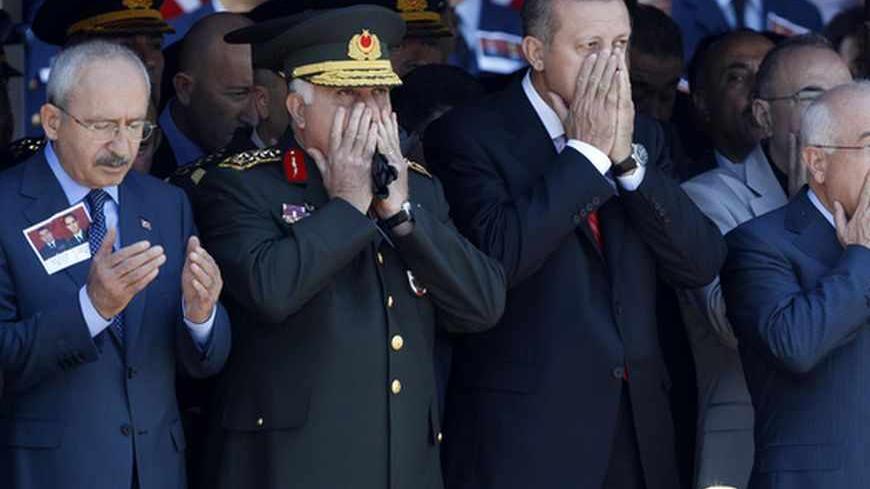 In their common history, Turkey and Iran have often tested each other’s power and patience, but whenever relations came to the brink of real conflict, they always found a way to de-escalate. Recent developments have revived their deeply rooted mutual distrust.

The black cat is, of course, Syria. But now both countries are looking to lean on each other. Iran’s new President Hassan Rouhani seeks a moderate Iranian diplomacy around the concept of “heroic flexibility,” a reference to Imam Hasan’s legacy of peace. Aiming to reduce tensions with the West, Rouhani’s approach offers an equally good opportunity for a new beginning with Turkey, and statements by both sides signal willingness to grasp it. The rhetoric that “Turkey’s regional influence will diminish if the United States and its European allies move closer to Iran” is now obsolete and no longer affordable.

Parliament speaker Cemil Cicek, an influential figure in government policies, spent five days in Iran, starting on Sept. 21. He met not only with his Iranian counterpart Ali Larijani, but also with Supreme Leader Ayatollah Ali Khamenei, Rouhani, Expediency Council Chairman Hashemi Rafsanjani and First Vice President Eshaq Jahangiri. The high-level reception Cicek received highlights not only the urgency of a bilateral thaw but also a desire to overcome the difficult juncture with minimal damage.

Iranians know well how to breed friendships and appease friends. The sites Cicek was taken to include the graves in Shiraz of Hafez and Sadi, two poets who greatly influenced Turkish literature; the legendary Irem Bagh and Persepolis, a symbol of the deep-rooted Persian political tradition. History has taught both Turks and Iranians that poetry is a guiding light in the corridors of power. The verses recited at the graves of Hafez and Sadi are as soothing to Turks as to Iranians. A Shiraz tour is good when diplomatic ties are delicate.

The fact is that Turkey and Iran remain at loggerheads over the Syrian civil war. Over the past three years, Ankara has emerged as the key player in a process to isolate Iran from the Middle East by dismantling the Syrian component of the geopolitical axis that one side calls “an axis of resistance” and the other a “Shiite crescent.”

For Ankara, it is now hard to accept any other outcome, having designed all its rhetoric and action on the collapse of Syrian President Bashar al-Assad. Yet, rapprochement with Iran could allow Turkey to make a maneuver.

With the deal on chemical weapons averting the prospect of a military strike, the crisis in neighboring Syria is weighing heavy — a cannon ball in Turkey’s lap. The developments have weakened Turkey’s position while strengthening Iran’s hand. The direction set by the United States and Russia is to the Geneva II conference, at which Turkey is balking. But Ankara could hardly afford to continue digging in its heels over the US-Russia road map while the idea that a Syrian solution would be impossible without Iran is gaining prominence, and Iran is trying to join the process. If the dialogue remains on track, the Iranian and Turkish positions will inevitably draw closer.

The situation in Turkey’s border regions is also impeding a rapprochement. Amid the “Pakistanization” prospect in border provinces, where Turkey provides logistical support to armed groups, the need for cooperation with Iran has increased the possibility that the al-Qaeda-linked Jabhat al-Nusra and the Islamic State of Iraq and al-Sham could eventually grow too strong to control and threaten Turkey. Sectarian rifts are also increasingly likely to stoke a dangerous escalation on Turkey’s Sunni-Alevi divide. Tehran, too, is closely concerned with the possibility that the de facto Kurdish autonomy emerging in northern Syria under the leadership of the Democratic Union Party, linked to the Kurdistan Workers Party, could become permanent along at least 400 km (250 miles) of the Turkish border.

When it comes to Iraq, Tehran’s bilateral ties have steadily improved, while Ankara’s have worsened. The Iranian factor has become more important than ever in whether Turkey will turn a new page with Iraq or see the rift grow.

So, in this climate, any subtle message carries significance. At the end of his visit to Iran, Cicek said, “Both the international community and Turkey have expectations from Rouhani.” He emphasized the importance of bilateral cooperation not only in terms of economic ties but also for regional peace and stability. Unlike the rhetoric of Prime Minister Recep Tayyip Erdogan and Foreign Minister Ahmet Davutoglu, Cicek frowned upon bloodshed in the name of Allah.

“Both Syria and Iraq are in chaos. In those two societies, which have embraced Islam, the religion of peace and prosperity, blood continues to be shed, using Allah’s name, with cries of ‘Allahu akbar,’” Cicek said.

Rouhani, for his part, described the rise of extremism and sectarian conflicts as major threats for both countries.

“Our two countries may have different approaches on this issue, but they share the same objectives and interests. Tehran and Ankara should play a more effective role in the region, especially in resolving regional crises, through closer cooperation and interaction,” he said. First Vice President Jahangiri, meanwhile, stressed, “There is a serious will and determination among the Iranian officials to expand and boost the level of relations with the friendly and neighboring Turkish nation.”

Rouhani no stranger to Gul

Parallel to Cicek’s visit, Rouhani and Foreign Minister Cevad Zarif met with Turkish officials on the sidelines of the UN General Assembly in New York, again emphasizing cooperation. Milliyet journalist Asli Aydıntasbas, who followed Turkish President Abdullah Gul in New York, made the following observation: “Interestingly, the warmest message to Rouhani came not from the White House, but Turkey. Gul has for years known both Rouhani and Zarif. Given the tension in Turkish-Iranian ties over the past two years and the fact that, at the end of the day, Turkey belongs to the ‘Western alliance,’ Gul’s statement as head of state carries a special meaning: ‘A new era has begun in Iran. … I don’t expect a deviation from the main principles of the Islamic Republic. But I expect that they will be more reconciliatory, more open to dialogue and more libertarian at home. Not in Syria.’ So what does this mean? Turkey is giving credit to Iran and saying that the world is ready to ‘turn a new page’ with Iran. At the same time, it is hinting it could recalibrate its ties with Iran, in trouble over Syria.”

There is another point that should not be overlooked. Cicek and Gul, highlighting cooperation with Iran, though cautiously, represent a camp that is increasingly moving away from Erdogan and Davutoglu with respect to Syria. Thus, the messages of dialogue and cooperation require testing in terms of their actual impact on rapprochement. The Erdogan government had managed to forge amicable ties with Iran, a country earlier classified as “involved in subversive and anti-regime activities in Turkey” with a 1997 resolution of the National Security Council. The ties soured when rivalry for influence heated in the Middle East, especially in Iraq and Lebanon, and the Syrian crisis deepened. Given the past experience of friendship, turning a new page could still be possible in the new climate despite all difficulties.