Although Iran is not expected to change its Syria policy, working with Iranian President Hassan Rouhani may help ease regional tensions. 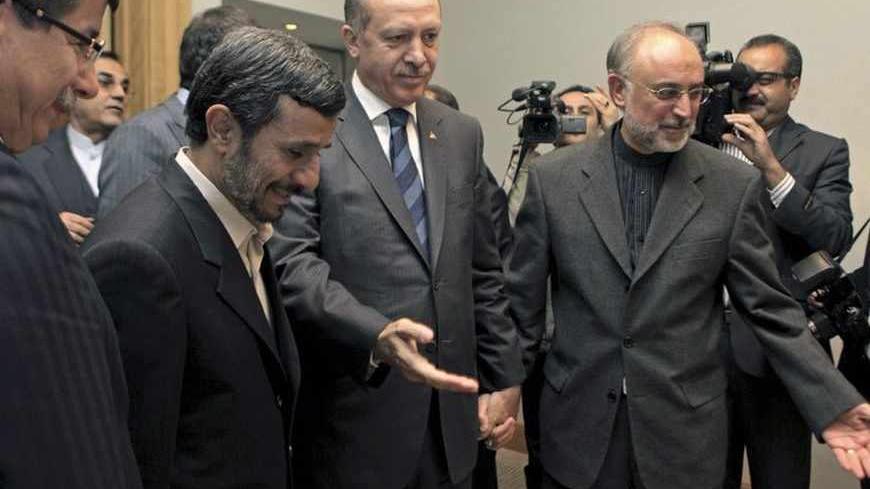 Turkey and Iran, which have somehow managed their relations for at least 300 years without ever giving up their “controlled tension” approaches, are for the first time on the same frequency with their common reactions to the coup in Egypt against deposed President Mohammed Morsi.

Currently, Turkey-Iran tensions are the worst seen in recent years due to Turkey reducing its oil imports from Iran by 40% in the framework of US sanctions; the NATO radar shield deployed at Malatya-Kurecik and the Syria crisis.

Now, Ankara hopes that with new Iranian President Hassan Rouhani in charge, there may be a new page in bilateral relations. The presence of 55 countries, 11 of them from the head-of-state level, at Rouhani’s oath-taking ceremony in Tehran showed that Turkey is not alone in opening a new line of credit to Iran.

Nevertheless, the Ankara-Tehran cold war prompted Turkey to respond to the inauguration invitation at the level of foreign minister. The absence of Turkey's head of state was perceived as a message from the Turkish government. Although sources speaking to Al-Monitor insisted, “We don’t agree with the views that it was a low-level representation. Previously, Turkey used to send its ambassador,” they did not note this was the first time Iran had invited foreign countries to the inauguration.

When asked if Turkey was expressing a position, Turkish Foreign Minister Ahmet Davutoglu denied it emphatically. “No, never. Don’t attribute it a special significance. According to what are you going to determine the level of representation when there is no precedent?”

Daily Radikal columnist Akif Beki, who accompanied the foreign minister on his Tehran trip, reported how Davutoglu outlined the hopes Turkey has for Rouhani. "Internally, responding to peoples’ expectations, [making] improvements in the economy and taking pertinent steps. International expectations are for a solution to the nuclear program, and the regional expectation is for a review of Iran’s Syria policies. Rouhani will set his own course. During Hashemi Rafsanjani's reign, they had policies of opening up to the outside world, and under Ahmedinejad, it was to emphasize policies of regional influence. They followed courses according to circumstances of the day.

"Everybody sees that a new foreign policy is needed in the Rouhani era. Under Ahmedinejad, although we had divergences of views, we were able to make progress in certain fields. Now, under Rouhani, despite our divergences, we are ready for a more open and sincere dialogue on regional issues, primarily Syria. There must be a new perspective. We believe there will be an opportunity for dialogue under Rouhani."

When asked, "Is there a likelihood of a serious change in Iran’s Syria policy?" Davutoglu responded: "We are expecting first a change in Syria. In recent times, Iran’s Syria policy has gone beyond taking diplomatic positions to becoming a direct party after Hezbollah’s entry to the field to fight. Rouhani’s review of their policy of the last two years will contribute to regional peace. But if they persist with the same policies, the Rouhani era might become a new disappointment for the region. He has clout because of his religious background and his experience of having conducted serious negotiations at critical times. As a leader who can combine these two identities, he can pursue Hashemi’s line by reinforcing it with new elements. This may open the way to a new period.”

Gul, Rouhani to meet in September

The emphasis in the Rouhani-Davutoglu meeting was on the need to work together to overcome their concerns and divergences on Syria. After the meeting Davutoglu said: "[Rouhani] said they pay attention to consultations with Turkey on this issue. Inshallah, in meetings we will soon have with Foreign Minister Jawad Zarif and in meetings our president and prime minister will have with Rouhani, we will continue these consultations." Sources told Al-Monitor that Prime Minister Recep Tayyip Erdogan called Rouhani to congratulate him while President Abdullah Gul has initiated contacts to meet the Iranian leader during the UN General Assembly in September in New York.

Although consultations between the leaders of the two countries are important, there is no room for illusions about Syria. When asked on his way to Tehran how he will respond if Syrian Prime Minister Wael al-Halki extends his hand, Davutoglu replied, "No, definitely not! We can’t accept a contact." They actually came close three times during the Tehran ceremony, but Davutoglu turned away his head. Halki received a promise of support from Rouhani. The Syrian SANA news agency reported Rouhani as saying, "Iran wants to develop relations with Syria and will be standing with Syria to confront the difficulties it faces."

In his first news conference, Rouhani said Iran will maintain its Syria policy. “We don’t think there is another way out than a political solution in Syria. We categorically reject external intervention. The future of Syria should be determined by the wishes of the people through democratic elections. Our duty as Iran, with Turkey and our regional countries, should be to work together to end this situation in Syria soonest, while opposing foreign intervention and weapons assistance to the groups in the country.”

'It will be Turkey that will change'

Iran’s handling of Syria is a state policy. It will not easily change with Rouhani. But Iran’s possible focus on political solutions strengthens the grounds for dialogue with Turkey. Associate professor Veysel Ayhan, chairman of International Middle East Peace Research Center, assessed for Al-Monitor Davutoglu’s first contact with Rouhani. He believes it is Turkey that will change regarding Syria, not Iran. "Turkey is seeking reconciliation with Rouhani. They are trying to find a middle course that will satisfy all parties. That is, in Syria, Iran’s interests and the security of the Baath will be ensured and there will be a partial democracy. I think Rouhani’s emphasis in the meeting on democracy and security balance is significant. Turkey will agree to live with that regime in return for being able to say, ‘Yes, we have secured changes in the Assad regime.’”

Deniz Zeyrek, Ankara bureau chief of the daily Radikal, made the following assessment for Al-Monitor: "Turkey is optimistic about Rouhani. Our participation at the foreign minister level at the presidential inauguration ... points to Turkey’s goal of resurrecting relations with Tehran, which had hit bottom. Ankara’s expectation from Rouhani is to soften Iran’s policies that have led to imposition of heavy sanctions, instead of taking steps only in daily issues, such as Syria. Ankara strongly believes that the collapse of the Iranian economy, despite high oil prices, will compel Rouhani to adopt a reformist approach to relations with the West. But there is also a serious anxiety: The Iranian mullahs who constitute the establishment and who dominate the foreign policy could restrict Rouhani’s room for maneuver."

Zeyrek noted that a senior diplomat, who had predicted a possible struggle of power between the mullahs and popularly supported Rouhani, had said: "If Rouhani wins the power struggle, Iran can soften its policies in many areas, including Syria. He could aim at easing damaging embargoes by cooperating more with the West.”

Zeyrek said that Ankara, too, sees such a struggle as a possibility. "Ankara is pressed between its hopes for Rouhani and the anxiety that the mullahs are not going to concede. Ankara will shape its relations with Rouhani in a way that will help Rouhani succeed in his struggle.”

Turkey sees the hope for change that Rouhani has created in Iran as an opportunity to ease regional tensions. Working together with Iran could help bring it closer to the international community, but it may also help Turkey pull back from its own extremities.