Can Turkey, Iran Cooperate on Syria? 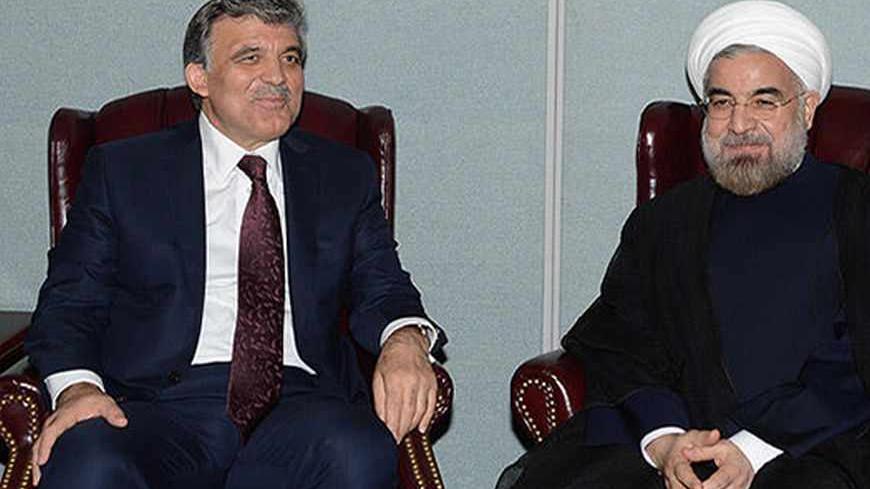 Iran’s new president, Hassan Rouhani, is causing much optimism around the world, not only raising hopes that some of the tensions in the Middle East involving Iran might be reduced, but also that Tehran can help resolve the region's most burning issue today — namely, the crisis in Syria. Whether this optimism is justified, only time will tell, but all new beginnings justify the benefit of the doubt.

Rouhani’s election is also seen as an opportunity for improving Turkish-Iranian ties, which have been strained in recent years for a host of reasons, most notably the support the two countries are giving to the opposing sides in the Syrian conflict. In a Sept. 26 article for Al-Monitor, Fehim Tastekin provides a broad analysis of the possible new opportunities under Rouhani for relations between Tehran and Ankara.

Recent high-level contacts between the two countries were capped by talks between President Abdullah Gul and Rouhani in New York on the sidelines of this year's opening of the UN General Assembly. According to media reports, their meeting was warm and held in a spirit of cooperation on a host of issues, including Syria. Giving the urgency of the matter, however, the immediate question is what can the two countries do to cooperate to help douse the flames of the Syrian conflict, especially when they do not see eye to eye on the causes or President Bashar al-Assad’s role in it.

As recently as August, during an interview with the pro-government Ulke TV, Turkish Prime Minister Recep Tayyip Erdogan had harsh words for Iran about its support of Assad and his regime. Asserting that “Turkey had always stood by Iran, even at the risk of antagonizing the world,” Erdogan went on to say that he “would have expected Iran to have taken a different position on Syria,” clearly implying that Tehran should have adopted a position close to Turkey’s.

Trying to hit where it hurt, Erdogan recalled that Iran’s first supreme leader, Ayatollah Ruhollah Khomeini, had refused to meet with Syrian President Hafez al-Assad following the massacre of Sunnis in Hama in the 1980s by the Baathist regime. Not surprisingly, these remarks elicited angry editorials in the Iranian press, which recently labeled Erdogan a “warmonger” in its headlines, after he appeared to be goading the West to mount a military operation against Assad, while also indicating Turkey’s keenness to participate in any such operation.

In an op-ed in The Washington Post published on Sept. 20, Rouhani struck a conciliatory tone that contrasted sharply with Erdogan’s position and signaled that Tehran was prepared to play a role in facilitating dialogue between the Syrian government and the opposition: “The world has changed. International politics is no longer a zero-sum game but a multi-dimensional arena where cooperation and competition often occur simultaneously. Gone is the age of blood feuds. World leaders are expected to lead in turning threats into opportunities,” Rouhani wrote.

His remarks, although not intentionally, can also be taken as criticism of Erdogan’s one-track policy on Syria. Turkey's policy has been based single-mindedly on ousting Assad by force and an unwillingness to accommodate any notion of a diplomatic settlement that would have Assad seated at the negotiating table.

New York Times columnist Roger Cohen believes Ankara could learn from Tehran these days. Recalling, in an op-ed on Sept. 26 that Erdogan had started off with a “catchy dogma of ‘zero problems with neighbors,’” Cohen noted that Ankara now has “zero neighbors without problems,” with Syria the first among them. Cohen wrote, “Erdogan’s fulminations over the suppression of the Muslim Brotherhood in Egypt and the treatment of the Sunni opposition in Syria have the air of the unbalanced outbursts of a lonely man whose moderate Islamism has morphed into an immoderate fury. Perhaps Erdogan, whose indignation is not groundless, would benefit from the counsel of a neighbour, Iran. Its fast change has involved the sudden embrace of ‘heroic flexibility.’”

While Erdogan continues to “fulminate” on Syria and seems determined to hold tight to his view on Iran’s position on Syria, President Gul has emerged, yet again, as Turkey’s voice of reason in regard to the crisis. Talking to reporters on the plane en route to New York for the General Assembly gathering, Gul said that “Iran is an important country” and must “not be sidelined” in the search for a settlement in Syria.

“Iran is as concerned with Syria as Turkey is. We have had many discussions with Iran but have been unable to come to a common position until now. But you cannot sideline Iran. You cannot have a Geneva in that way. Iran has to be involved. Russia and Iran must definitely be involved,” Gul was quoted as saying.

Gul's reference to “Geneva” is the proposed “Geneva II” talks, under UN auspices, which the Erdogan government has been less than keen about since it accepts the Assad regime as an interlocutor. The Erdogan government has also expressed little enthusiasm in the past for seeing Iran involved in talks on Syria given Tehran’s unconditional support for Assad.

Erdogan’s position, however, which contrasts with Gul’s more flexible and realistic line, has increasingly become untenable, especially following the US-Russia agreement on a formula for Syria to hand over its chemical weapons. That agreement shifted the military option to the backburner.

Meanwhile Iran has also expressed strong interest in being present at the Geneva II talks: “If invited without any preconditions, Iran will participate in the conference in order to help resolve the Syrian crisis,” Rouhani was quoted by the Iranian media as saying during a meeting with Lakhdar Brahimi, the UN and Arab League special envoy for Syria, in New York on Sept. 26.

Despite the Erdogan government’s less than enthusiastic position to date, recent high-level discussions between Foreign Minister Ahmet Davutoglu and his new Iranian counterpart, Mohammad Javad Zarif, as well as the talks between Gul and Rouhani could result in more coordination between Ankara and Tehran on Syria now that the emphasis concerning the crisis has shifted to the diplomatic realm.

Turkey and Iran working together to end the crisis would undoubtedly have positive ramifications for the Middle East given the growing sectarian divide between Sunnis and Shiites. It is obvious, however, that for things to move in this direction, the Erdogan government will also have to show more flexibility than it has to date, the way Iran has ostensibly started to do. If this does not happen, Turkey could find itself in the ironic situation of being further isolated as the search for a settlement to the Syrian problem continues, not to mention other issues relating to the Middle East, while Iran becomes a proactive contributor in resolving the crisis.

There is a caveat, however. All of this assumes that Iran will be able to maintain the moderate line Rouhani is presenting today and avoid reverting to the radical positions that have resulted in its international isolation.

Because of Turkey's policies toward Syria and Egypt, Erdogan’s advisers are calling Turkey’s isolation in the Middle East “precious isolation,” implying a moral superiority to others. Iran under Rouhani, however, seems to be coming around to realizing that there is little “precious” when it comes to international isolation and that it is better to be part of the game as new international alignments take shape than to be a passive spectator.