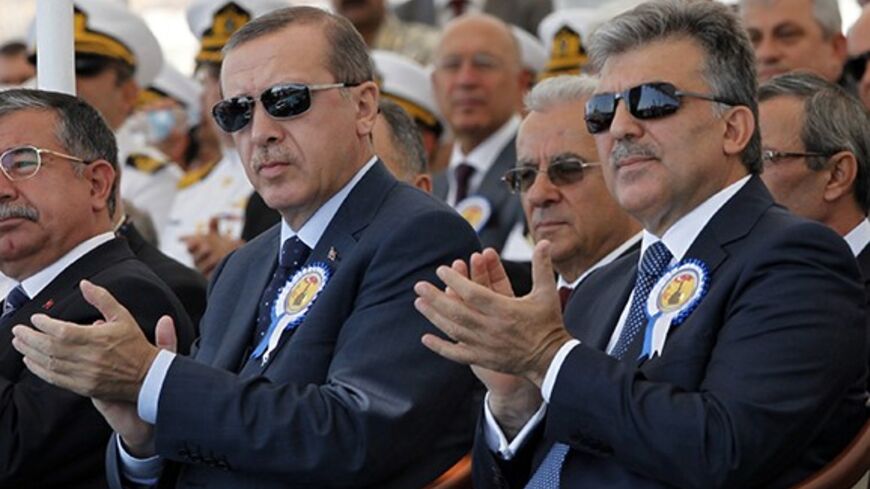 It is an open secret in Ankara that President Abdullah Gul is far from pleased with the government’s handling of foreign policy in general and the Syrian crisis in particular.

He has not spoken out critically on Syria in the past in order not to embarrass Prime Minister Recep Tayyip Erdogan and Foreign Minster Ahmet Davutoglu, given their determination to pursue a one-track approach to this crisis that is predicated solely on Syrian President Bashar al-Assad’s demise.

But, like most people, Gul sees that Turkey is not only facing new and previously unexpected threats as a result of the crisis in Syria, but also that Ankara is on the fringes of all the major diplomatic efforts currently underway to stabilize the Middle East, including the Geneva II conference on Syria planned for Jan. 22.

This is in stark contrast with Davutoglu’s continuing claim that Turkey is poised to become one of the principal game setters of the region. With developments in the Middle East continuing to confound Erdogan and Davutoglu’s expectations, confronting Turkey instead with increasingly dangerous situations, Gul has clearly decided it is time to speak up.

He is exhorting the government now to “recalibrate” its general approach to foreign policy and fine-tune it according to the realities prevailing on the ground. Since the Syrian crisis is the most burning foreign policy issue facing Turkey today, Gul clearly had this first and foremost in mind on Jan. 14 during a critical address that attracted more attention abroad than in Turkey.

He spoke during a luncheon at the Presidential Palace for Turkish ambassadors who are currently serving abroad and at home, and who had gathered in Ankara for the 6th annual Ambassador’s Conference — a gathering initiated by Davutoglu in July 2008 to explain his government’s foreign policy priorities.

Davutoglu, who was also present at the luncheon, could not have been too pleased with some of Gul’s remarks, since these clearly suggested disapproval of the government’s approach to critical foreign policy issues. Gul feels qualified to be critical in this regard since he served as foreign minister from 2003-07, before being elected president. He earned respect among Turkish and foreign diplomats for his levelheaded approach to international crises as well as his positive approach to Turkey’s EU bid, which he maintains.

Gul started his address to the ambassadors by pointing to developments around Turkey, and saying the region has entered a stage that would seriously affect Turkey’s foreign policy and national security interests.

He followed up his words by referring to the current political and economic turmoil at home due to the massive corruption investigation, without naming it. Gul said past experience showed that domestic crises reduce the effectiveness of the foreign minister, the prime minister and the president in the foreign policy domain.

“This is why it is very important to study these matters carefully, and for a country to attain the highest standards possible in democracy, freedoms and the rule of law, with a developing economy that complements these,” Gul said.

His remarks could not have gone down well among some in government circles, given the acrimonious debate in Turkey on precisely these topics, which is being fueled by the government’s constitutionally questionable responses to the political crises it faces.

Saying it is incumbent on Ankara to consider the changing strategic conditions in the world — and in its region — and establish Turkey’s place in the world accordingly, Gul went on to dwell on the situation in Syria.

“When developments in Syria are considered in particular, the threats and potential threats that have emerged are growing,” he said. Gul referred to the “new realities” that have emerged on Turkey’s eastern borders as a result of the authority vacuum in that country.

Maintaining that the Middle East had entered a period of instability and conflict that would influence developments for years to come, Gul said Iraq, Syria and Lebanon had become a “contiguous front”  marked by a struggle for influence among local powers and proxy wars.

Gul went on to emphasize that the job of diplomacy was to solve the most difficult problems. “The first stage of any settlement, however, is correct and realistic diagnoses. Whether it is in internal matters or external ones, the key to solving problems is common sense and a sensible approach, as well as dialogue and empathy that will enable you to understand your interlocutor,” Gul said.

Considering how off-target Davutoglu’s predictions about Syria have been, and the strained relations Erdogan has with many leaders or governments in the Middle East today, it does not take much imagination to guess what Gul was referring to. Gul’s most crucial exhortation, and the one that has prompted many to wonder whether Turkey’s Syria policy is on the verge of a major shift, followed next, although he did not mention Syria by name.

“In view of the realties that have emerged on our country’s southern flank, we have to recalibrate our diplomacy and security policies by also taking into consideration the threat perceptions that have emerged around us,” he said.

Gul said, in effect, that the Erdogan government has to change its foreign policy line in regard to this region and act on the basis of what has emerged, rather than on what it would like to see emerge. It was also interesting to note Gul bringing up the military adage “Strategy is for amateurs, logistics is for professionals.”

Davutoglu could not have been very happy over this remark, either, since he considers himself a major strategist; his well-known book on Turkey’s foreign policy aims was even named Strategic Depth.

Gul also made critical remarks about Ankara’s dealings with its allies. Indicating that while it was normal for allies to disagree from time to time over specific issues, he said it was nevertheless important to be careful about these relations, and to understand how important they are.

“This is why I believe it is in Turkey’s interest to further enrich our ties with our allies in a spirit of mutual trust,” he said. Considering the way Erdogan has been hitting at the West, starting with the United States, which he accuses of being behind the various conspiracies allegedly aimed at toppling his government, it does not require much imagination again to guess what Gul meant.

Many are wondering now what effect Gul’s remarks will have on Turkey’s Syria policy, and what it means for Erdogan to have the president — who also hails from the ruling Justice and Development Party (AKP) after all — say in so many words that the government’s Syria policy has been wrong.

Given the way he has committed himself to a one-track line on Syria, which foresees Assad absenting himself from the scene before any settlement formula can be considered, it is clear that Erdogan’s populist instincts will incline him toward maintaining this position for the sake of political consistency at home.

Ankara has nevertheless been gradually shifting its Syria policy due to developments it has no control over. Having started by reproaching any conference on Syria that has Assad or his representatives at the table, Davutoglu is now emphasizing Turkey’s support for Geneva II. He is also calling for Iran’s participation in Geneva, although he knows Tehran’s opposes forcing Assad out of power.

Gul has no power at the end of the day to enforce his will over the government. So his call for a recalibration of Turkey’s foreign policy is more normative than directive. This is not to say his remarks are useless. Some of the ambassadors he addressed on Jan. 14 told Al-Monitor later that they were relieved to see that the president has a better focus on the realities and intricacies of foreign policy than either Erdogan or Davutoglu.

It is clear, however, that Erdogan will have to take Gul’s exhortations seriously eventually, especially since the general perception is that his government’s foreign policy is marked by more failures than successes. It was also interesting to note that Erdogan did dwell on the Syria issue during his own address to the ambassadors, which took place a day after Gul’s address.

But to have Gul come out like this is not good for Erdogan, especially as the country starts preparing for this summer’s presidential elections that could see the much more levelheaded Gul as his principal political rival.