Turkey resets ties with US 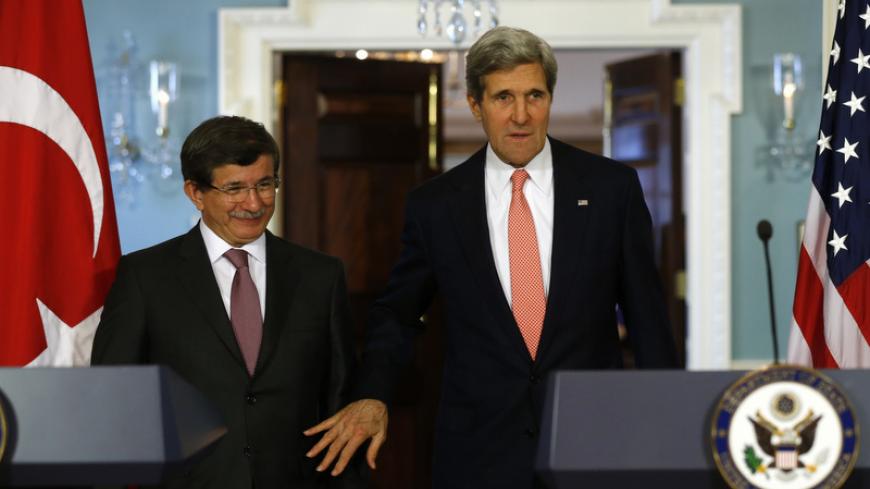 “Precious isolation” is how a key foreign policy adviser to Turkish Prime Minister Recep Tayyip Erdogan characterized Turkey's regional status some months ago. This was a highly unconvincing attempt to put a positive spin on Turkey’s increasing loneliness in the Middle East due to policies that turned out to be out of tune with the political realities of the region.

It is no longer a secret, however, that Ankara has been forced to “reset” its regional priorities after this isolation proved to be not so “precious” in the end. The Erdogan government is trying to return to the table now as an active regional player. This new drive also comes at a time when international efforts — including major initiatives by the United States — aimed at overcoming regional crises are gathering speed.

Developments in the region have also brought up the need for Ankara to recalibrate its ties with Washington. Relations have seen some turbulence since early summer due to a number of issues, including differences over Syria, Iraq, Egypt and Turkish-Israeli ties. Turkish Foreign Minister Ahmet Davutoglu was in Washington earlier this week doing just that.

He touched all the right chords during his meetings with US Secretary of State John Kerry, Secretary of Defense Chuck Hagel and National Security Adviser Susan Rice, as well as his contacts with US opinion-makers. As Sedat Ergin — the veteran commentator for Hurriyet who also served as the paper's Washington representative in the 1990s — put it in his Nov. 22 column, Davutoglu’s message was “the warmest and strongest to date expressing the importance attached to the United States by Ankara.”

Some of the striking superlatives Davutoglu uttered while in Washington certainly confirm this observation. During his Nov. 18 joint press conference with Kerry, for example, he acknowledged the US' leading role in the Middle East by showering the secretary of state with compliments.

Referring to Kerry’s “dynamic diplomacy” — from the Middle East peace process to engagement with Iran — Davutoglu said, “I don’t know how many times you came to our region ... [Y]ou are the most ... fast-moving foreign minister or secretary of state in the history, I am sure.”

Davutoglu added that the “value-based model partnership” between Turkey and the United States “will continue forever, and will be one of the main assets for the international community to resolve any issue.” He continued in a similar vein during a policy speech at the Brooking Institution that same day.

"Strengthening our ties with the United States has always been the backbone of our foreign policy,” he told opinion-makers at Brookings. “No one in Ankara or Washington doubts that Turkish-US relations will continue to be one of the main alliances in assisting resolution of regional issues in the coming years.”

These are politically risky remarks for Davutoglu given the widespread anti-Americanism in Turkey. No one recalls any Turkish foreign minister to date admitting openly that Ankara’s ties with the United States “formed the backbone of Turkish foreign policy.”

Erdogan was lambasted in 2009 by the Turkish opposition after he said Turkey was a “co-chairman of the Greater Middle East Project,” which was put forward somewhat ambitiously by the George W. Bush administration at the time. These remarks were used to justify the claim that Erdogan was part of a US master plan for the region.

Defending his remarks, Erdogan said this project aimed to establish peace and contribute to economic and democratic development in the region. His critics continue to use those remarks against him, and Davutoglu’s words in Washington will have provided more grist to this mill.

Davutoglu's comments, nevertheless, reflected Ankara’s need to realign its regional policies with those of the Barack Obama administration. This is a significant change by the Erdogan government, seeing as differences on Syria and Iraq — to take the two issues of immediate importance to both countries — were apparent until not so long ago.

Ankara, which has based its Syrian policy principally on the ouster of Syrian President Bashar al-Assad, was deeply annoyed, for example, when Washington decided against bombing Syria. The Erdogan government was also annoyed when the United States decided to support the Russian-brokered plan for ridding Syria of chemical weapons.

Ankara argued this plan was merely sidestepping the issue of getting rid of Assad, and thus preventing him from continuing to kill his people by conventional means. Turkey was also cool toward US and Russian diplomatic efforts to convene the Geneva II conference on Syria, arguing this would legitimize the Assad regime since its representatives would be at the table.

During his press conference with Kerry, however, Davutoglu reflected Ankara’s changed position. “Today, we confirmed again that as Turkey and the United States, we will do everything possible to end this bloodshed, help victims of this crisis in Syria and make diplomacy possible in Geneva II,” he said.

Ankara and Washington have also been at odds over Erdogan’s strained relations with Iraqi Prime Minister Nouri al-Maliki. Energy agreements between Turkey and the Kurdistan Regional Government (KRG) over Baghdad’s head have been another point of contention. The Obama administration argues that this endangers Iraq’s fragile unity. Washington also argues that improved ties between Ankara and Baghdad will contribute to maintaining Iraq’s unity.

The Erdogan government responded by denying that it is stoking sectarianism or separatism in Iraq, saying it is merely opposed to the Maliki government’s anti-democratic steps aimed at pressuring the Sunni minority into submission. As for the question of Turkish companies' energy deals with the KRG, Ankara’s line continues to be that if Washington is so concerned, it should first prevent US oil giants from signing similar deals.

Turkey has nevertheless “reset” its ties with the Maliki government due to pressure from regional developments. Ankara has been providing assurances to both Baghdad and Washington that Iraqi unity is paramount for Turkey. Visits are now expected by Maliki to Ankara and Erdogan to Baghdad to capitalize on the newfound positive atmosphere in ties, which Washington has also been praising.

Meanwhile, the US side has pleased Ankara by openly warning Maliki during his recent visit to Washington that his government should stop discriminatory and anti-democratic policies against non-Shiites.

Davutoglu noted during his press conference with Kerry that Turkey supported the new openings in US-Iranian ties, vowing, “Turkey will do everything possible to ease this tension.” In addition to this, he expressed Ankara’s full commitment to cooperating with Washington on the Middle East peace process.

Little was said about Turkish-Israel ties, however. The deadlock continues in this regard, despite US efforts to bring the sides together. But if Turkish-US ties form “the backbone of Turkey’s foreign policy,” as Davutoglu put it, then it is clear that Turkish-Israeli ties cannot remain in this state either.

Davutoglu also dropped some strong hints in Washington that Turkey’s missile defense deal with China, which has been met with dismay by the Obama administration, is by no means writ in stone. In the meantime, Washington gave its support for Turkey’s request for an extension of the authorization for NATO’s Patriot missiles deployed near the border with Syria.

With Turkish-US ties being reinforced this way on the one hand, and the ongoing efforts to improve Turkish-Iraqi and Turkish Iranian ties on the other, Ankara appears set to move to the center stage again in terms of international efforts to stabilize the Middle East.

Of course, there are outstanding problems like Turkey’s ties with Egypt, which are still strained due to the coup that ousted President Mohammed Morsi. But Turkey’s resetting of its regional policies and recalibrating of its ties with a Washington that has become very active in the region, including in Egypt, means that Ankara cannot afford to let this issue remain unresolved for too long.