Erdogan Likely to Press Obama For Arms to Syrian Rebels 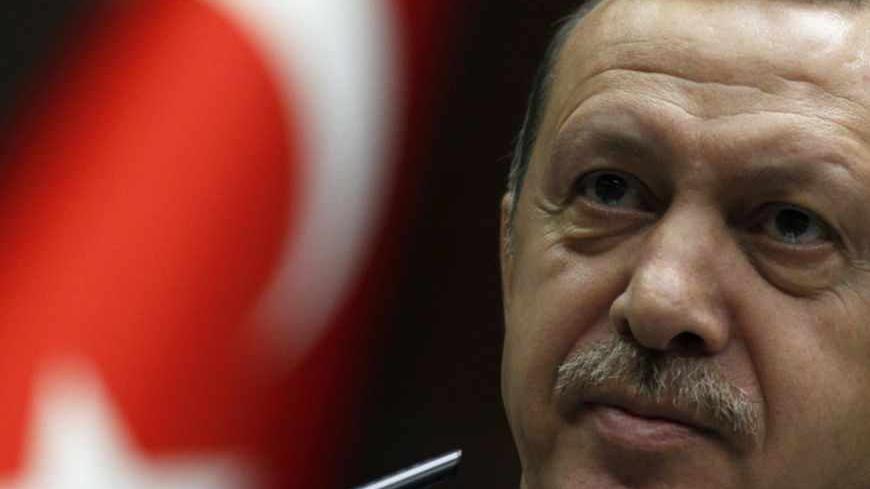 Turkey's Prime Minister Recep Tayyip Erdogan addresses members of his ruling Justice and Development Party during a meeting at the Turkish parliament in Ankara, May 7, 2013. - REUTERS/Umit Bektas

Prime Minister Recep Tayyip Erdogan will be in Washington next week for what diplomats are billing as the most crucial talks in recent times between the two countries concerning developments in the Middle East, with the crisis in Syria topping the bill. The talks with US President Barack Obama on May 16 will also cover Iran, Iraq, the Middle East peace process, Turkish-Israeli ties and Erdogan’s controversial visit to Gaza at the end of May.

There are issues, of course, over which the two countries are in disagreement, such as the Gaza visit and Ankara’s developing ties with the Kurdistan Region of Iraq that Washington frowns upon. In turn, Ankara is disappointed with Washington’s failure to act more robustly against Syrian President Bashar al-Assad. The general mood of the one-day talks is nevertheless expected to be “positive” and “cooperative,” rather than “confrontational,” according to Foreign Ministry officials in Ankara who spoke with Al-Monitor.

Talking to reporters while flying to Brussels for a NATO summit at the end of April, a highly upbeat Foreign Minister Ahmet Davutoglu said the talks between Erdogan and Obama were expected to take up the entire day because “the nature of the matter has changed,” as he put it. “The way of looking at Turkey, the perception has changed because history is seen to be flowing in this region today and we are the only country that can guide it,” he said.

Despite such inflated remarks, Erdogan still has something of a delicate balancing act to perform in Washington. On Syria, however, he has the upper hand, as those in the Obama administration advising that the Syrian opposition be provided heavy weapons are reportedly gaining ground after claims that the Assad regime has used chemical weapons.

CNN quoted National Security Council spokeswoman Caitlin Hayden on May 2 telling reporters that all options remain on the table for the United States, including sending arms to the rebels, as the administration considers what action to take if reports concerning chemical weapons are corroborated. Obama has said the use of such weapons would be a “redline” for the United States.

Hayden’s remarks came after the Washington Post reported on April 30 that the Obama administration was preparing to send arms to the Syrian opposition, a claim that administration officials have not confirmed. Although Obama rejected calls by former CIA Director David H. Petraeus and former Secretary of State Hillary Clinton to arm the opposition while they were still in office, there is hope in Ankara that allegations of chemical weapons use will spur Washington to action.

It is unlikely, however, that Erdogan will call for direct intervention in Syria by the United States, since supporting such an action against an Islamic country would displease his Muslim supporters. Erdogan is expected instead to limit his requests to weapons for the Syrian opposition and more pressure at the Security Council for UN-sanctioned international action against the Assad regime.

Erdogan will also try to convince Obama that groups like Jabhat al-Nusra, which the United States has declared a jihadist terrorist group, do not pose the threat that Washington thinks they do. The Americans are not expected to change track on this issue and will warn Turkey to be highly vigilant against these groups.

In the meantime, Ankara has given no indication that it is willing to accept the idea of a political settlement to the Syrian crisis, as Washington has been urging. To the contrary, Erdogan blasted Assad on May 5, following reports of Sunnis being massacred in the coastal town of Banias.

"Hear me, Bashar Assad. You will give an account for this. You will pay a very, very heavy price for showing the courage you cannot show others, to the babies in the cradle with pacifiers in their mouths. God willing, the lamentations of these children will fall upon you as blessed revenge,” Erdogan intoned using his strongest language to date against the Syrian leader.

Turning to Iraq, Obama will undoubtedly try to convince Erdogan to restrict Turkey’s ties with the Kurdistan Regional Government (KRG), especially in the strategic energy sector, so they do not endanger the unity of that country. Ankara says it values Iraq’s territorial integrity, but this has not prevented it from deepening relations with the Iraqi Kurds.

Meanwhile, the government of Iraqi Prime Minister Nouri al-Maliki, a Shiite, is at loggerheads with Ankara over developments in Iraq as well as the Syrian crisis. Iraq’s acting defense minister, Saadun al-Dulaimi, accused Turkey on May 5 of being behind recent anti-government riots by Sunnis in Iraq. “It is like Anbar, Mosul or Samarra is part of the Ottoman Empire,” he was quoted by international agencies, referring to the fact that Iraq was once part of the empire. Turkey has denied the charge, but the exchange demonstrates the continuing tensions between Ankara and Baghdad.

It is expected that Obama will try to convince Erdogan of the need for a rapprochement with Maliki as well as the necessity of helping the United States in its attempts to reconcile the Iraqi Kurds with Baghdad. Washington is said to be concerned that the developing ties between Turkey and the KRG will force the predominantly Shiite Arab part of the country into Iran’s arms.

Erdogan, in turn, is expected to ask Obama to force Maliki into abandoning his anti-Sunni positions and pursue policies that are not sectarian driven. The coming months will reveal the results, if any, the Erdogan-Obama talks produce in Iraq.

Iran will also be part of the Obama-Erdogan discussions, falling under the shadow of the Syrian crisis. Tehran remains a staunch supporter of Assad, and recent remarks by Hassan Nasrallah, the leader of the Iranian-backed Lebanese Hezbollah, show that Shiites in the region are relying on Iran to keep Assad in power. In a televised address, Nasrallah said Syria has powerful friends who will not allow it to fall into the hands of radical Islamists and their international backers.

Allegations that Iran is continuing its program to produce a nuclear weapon are also expected to be on the Erdogan-Obama agenda. There was a time when Erdogan angered Washington for suggesting that if the United States and Israel had such weapons, he did not see why Iran should not have them. Much water has flowed under the bridge since then, with Ankara and Tehran looking at the Arab Spring from opposing perspectives, and Tehran angry at Turkey for allowing the deployment of NATO’s advanced missile-detecting radar system against Iran.

The issues of Israel and Erdogan’s Gaza trip are also expected to come up at the White House, with Washington continuing to encourage Ankara not to drag its feet in reconciling with Israel after the United States secured a formal apology to Turkey by Israeli Prime Minister Benjamin Netanyahu over the Mavi Marmara raid. This is a delicate matter for Erdogan given that his Islamist followers are not keen on a Turkish-Israeli reconciliation.

Erdogan’s criticism on May 6 of Israel’s latest strike against targets in Syria as “unacceptable” should also be seen as driven mainly by domestic politics. It was nevertheless revealing that he did not dwell on the matter, moving on instead to use the Israeli attack against the Syrian leader. “Assad is trying to cover up what happened at Banias by using the Israeli raids as a pretext," he said, while addressing members of his Justice and Development Party (AKP) in Ankara.

Ankara nevertheless appears keen to go along with the reconciliation process in view of other developments in the Middle East, and progress is being reported in the Turkish-Israeli talks for compensation for the nine Turks killed by the Israeli forces who raided the Mavi Marmara in 2010, as they tried to enforce the blockade of Gaza.

Erdogan’s planned Gaza visit remains a dilemma for Ankara. US Secretary of State John Kerry, to the annoyance of Ankara, has openly expressed Washington’s displeasure with the visit, suggesting it will be damaging at a time when efforts are under way to start a new round of Middle East talks and to reconcile Hamas and the Palestinian Authority (PA), led by President Mahmoud Abbas.

PA officials have also come out against the visit, saying it would be divisive for Palestinians. Kerry’s remarks have put Erdogan in a difficult position vis-à-vis his grass-roots supporters. He cannot appear now to have bowed to pressure from Washington, but he also does not want to be a spoiler in regard to a Palestinian reconciliation.

Foreign Minister Davutoglu told reporters on his way to Brussels that the issue is not Erdogan’s visit but peace between Hamas and the PA. Diplomats are suggesting that a formula could emerge from the Washington talks whereby Erdogan’s Gaza trip comes to be seen as part of the effort to promote Palestinian reconciliation.

Other topics, ranging from a free trade agreement to the Cyprus issue are also expected to be touched on during the day-long talks between Erdogan and Obama. Eyes around the world and in the region will undoubtedly be on what results, if any, these talks produce for the Middle East.