Ankara and Washington share too many concerns in the Middle East for any one issue, including Turkey's interest in getting Israel to lift its blockade of Gaza, to get in the way, writes Semih Idiz. 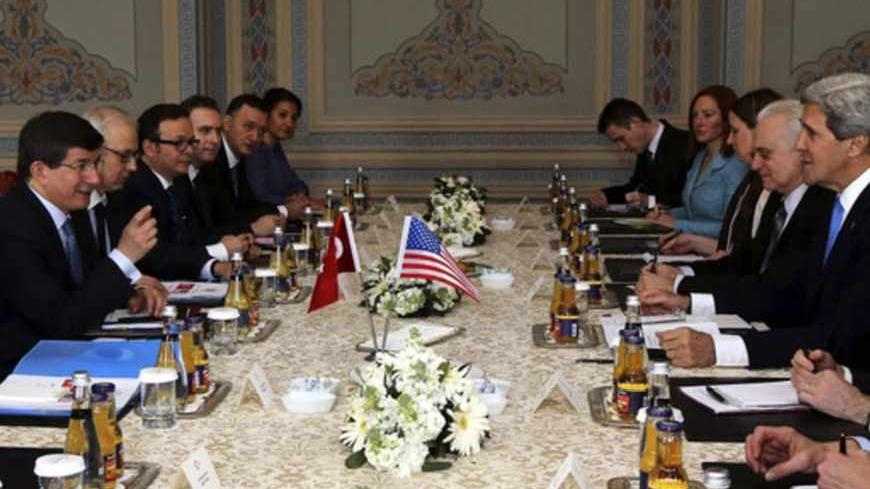 There was much speculation in February that Turkish-American ties were heading for the doldrums after the barbs exchanged between Washington and Ankara over remarks by Prime Minister Recep Tayyip Erdogan and Foreign Minister Ahmet Davutoglu about Israel and Syria, as well as comments by US Ambassador to Turkey Francis Ricciardone criticizing the Turkish judicial system.

I nevertheless suggested in a piece for Al-Monitor (Feb. 8) that the chill in ties would pass because neither side could really afford to harm a strategic relationship of 50 years standing, which in fact has weathered worse storms. There are still nuanced differences, of course, between the sides on specific issues; for example on how to approach the Syrian crisis, as well as disagreements concerning Turkey’s growing ties with the Iraqi Kurds in the energy field.

It was clear at the time, though, and still is, that the situation in the Middle East would ensure that neither Ankara nor Washington could push any differences they had beyond a certain point. It is obvious from today’s perspective that any chill in ties there might have been has indeed been overcome.

So much so that Secretary of State John Kerry, having already visited Turkey twice for consultations on regional issues within the space of two months, is due back in Istanbul on April 20. He will be in Turkey this time for a meeting of the "Friends of Syria" group, but it is clear that the sides will also continue their bilateral conversation on regional topics.

These will undoubtedly include Turkey’s normalizing ties with Israel, as well as the latest developments in Iraq. Davutoglu and Kerry will also lay the infrastructure for Prime Minister Erdogan’s visit to Washington on May 16 for talks with President Obama in the Oval Office. That visit is also being taken as a high point for ties.

The depth and frequency of the conversation between Ankara and Washington was in fact spelled out by Davutoglu at his joint press conference with Kerry in Istanbul, after their official talks on April 7 in the plush surroundings of the Ottoman-period Dolmabahce Palace.

Underlining the fact that Turkish-US ties have gained new depth after President Barack Obama came to power, Davutoglu said the sides were getting closer to one another with regards to regional and global problems. Indicating that he and Kerry were on the telephone “almost twice a week,” Davutoglu explained, “Because this is the turn of the tide, and history is very powerfully writing its own story. And both of the ministries feel the need to contact continuously and frequently regarding the developments on a global scale.”

Of course, not everyone in the region is happy with this relationship and the fact that Washington laid the groundwork for a rapprochement between Turkey and Israel. Former Ambassador Clovis Maksoud, who is also a permanent observer of the League of Arab States at the UN, has, for example, written a piece for Al-Monitor’s Lebanon Pulse suggesting that Washington is brokering an improvement in Turkish-Israeli ties at Palestinian expense.

Referring to Prime Minister Benjamin Netanyahu’s recent US-brokered apology to Turkey over the Mavi Marmara raid, Maksoud nevertheless has this to say:

“It should be realized that Turkey’s acceptance of the apology does not at all change its firm commitment to Palestinian self-determination, recognition of a Palestinian state and the removal of the Gaza blockade. Furthermore, Erdogan’s plans to visit Gaza signals that Turkey is committed to Palestinian national and human rights and to the reality of Gaza being an integral part of the Palestinian state.”

It is true that Turkey’s firm commitment to Palestinian self-determination, recognition of a Palestinian state and the removal of the Gaza blockade will continue. But whether Ankara’s stance, especially concerning the Gaza blockade, will be as absolute and categorical as Maksoud appears to be implying is open to question. Erdogan is unlikely to appear overly assertive on these issues when he has other, closer matters in the Middle East to worry about and which require close political and military coordination with Washington.

There are also those who are argue that the Turkish-Israel process is not a done deal yet and that Erdogan will seek out reasons to scuttle it by using the Gaza blockade issue. But this is not as simple as it may appear to some, no matter what pressures may be coming from the Arab world, as well as Erdogan’s own Islamist grass-roots supporters.

There is also the fact that Washington is pressuring Turkey this time to concretize the rapprochement with Israel, having pressured Prime Minister Netanyahu into apologizing to Turkey for the Mavi Marmara raid.

It is clear, given developments in the region, that Erdogan is also aware, whatever his personal inclinations my be, that developments in the Middle East will require even closer coordination with Washington in the coming period; especially if situations arise where Turkey has to further bolster the defense of its eastern borders with NATO assistance.

So when Davutoglu says he is in touch with Washington over the phone “almost twice a week,” he is not merely uttering a pleasant remark for the sake of reporters. Apart from the defense-side of the equation, Turkey also wants to have a central role in terms of the key processes in the Middle East.

It has seen however that this is not possible unless some conditions are met. One of these conditions is patching up differences with Israel. There is also the potential for serious cooperation in the energy field that has emerged between the two countries that has to be factored in here.

Washington, for its part needs the help of a regional player like Turkey, which not only has a geostrategic importance for the West as a NATO ally, but also has attained critical mass in terms of its economy in a way that makes it a potential contributor to economic and hence political stability in the region.

Finally there is what is perhaps the most important issue of the day; namely the ongoing situation in Syria. While President Obama remains standoffish as far as any military intervention in that crisis is concerned, it is clear, whichever way the chips fall in the end, that the coordination between the US and Turkey with regards to this crisis will remain crucial for some time to come.

The logic of Turkish-US ties may defy Islamists in Turkey and the Middle East, and anger the enemies of both America and Israel in the region. It is clear however that this logic has ensured the continuity of these ties over half a century. What would be illogical is to expect this situation to change anytime soon.

Semih İdiz is a contributing writer for Al-Monitor’s Turkey Pulse. A journalist who has been covering diplomacy and foreign-policy issues for major Turkish newspapers for 30 years, his opinion pieces can be followed in the English-language Hurriyet Daily News. He can also be read in the newspaper Taraf. His articles have been published in The Financial Times, The Times of London, Mediterranean Quarterly and Foreign Policy magazine, and he is a frequent contributor to BBC World, VOA, NPR, Deutsche Welle, various Israeli media organizations and Al Jazeera.