Israel's recent apology to Turkey over the Mavi Marmara raid offers Turkey a chance to regain its lost political influence in the region, writes Semih Idiz. 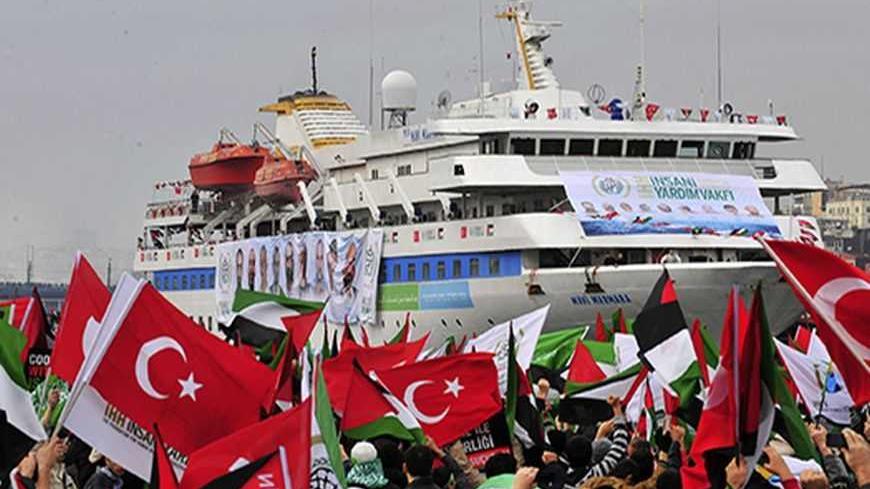 Israel’s unexpected official apology to Turkey over the deadly May 30, 2010, raid by Israeli commandos on the Mavi Marmara aid ship, during which nine Turkish pro-Palestinian activists were shot dead, may be the product of necessity for a country increasingly isolated in its region.

The apology, whose timing took many — this writer included — by surprise, however, also provides Turkey a chance to regain its lost political influence in a region where it once appeared set to play a key role as a major mediator.

Turkey and Israel will also have a chance to cooperate in the energy field, following the discovery of vast gas reserves in the Eastern Mediterranean, since the most economically profitable way of carrying the gas to world markets is through Turkey, according to industry experts.

Israel’s apology caught many off-guard coming as it did at a time when the already bad atmosphere in ties was soured further after Prime Minister Recep Tayyip Erdogan’s recent remarks, during a UN forum in Vienna, in which said “Zionism” should be considered a “crime against humanity.”

Israeli Prime Minister Benjamin Netanyahu had responded angrily, saying this was "a dark and mendacious statement,” while Erdogan was also rebuked by Washington and UN Secretary General Ban Ki-moon.

None of this suggested a dramatic reconciliation between Turkey and Israel was in the offing. Particularly after Foreign Minister Ahmet Davutoglu responded to criticism of Erdogan’s “Zionism” remark defiantly, saying Turkey would never look on as Israel continued its aggressive policies.

Diplomats have been working for some time behind the scenes, of course, trying to reconcile the two countries. Perhaps more should also have been read into the recent decision by Israel to allow the sale of advanced electronic systems to the Turkish air force worth $200 million. The same could be said for Ankara’s partial lifting in December of its vetoes in NATO against joint alliance initiatives with Israel.

But after Erdogan’s “Zionism” remarks there was no inkling that Netanyahu was about to bite the bullet and take a politically risky step for himself at home. As it turned out, former hard-line Foreign Minister Avigdor Lieberman did not waste time in speaking out against the apology.

Referring to Netanyahu’s decision as “serious mistake," he said "Erdogan's refusal to apologize for his explicitly anti-Zionist remarks alongside the Israeli apology hurts Israel's dignity and status in the region and the world."

But the “clarification” by Erdogan of his “Zionism” remark, in an interview with the Danish daily Politiken, where he said he had only criticized Israeli policies, and added he had always spoken out against anti-Semitism, seems to have been sufficient for President Barack Obama to convince Netanyahu, during his recent visit to Israel, to apologize to Turkey.

Now that the apology has come, and has been accepted, there are those who warn against great expectations in terms of Turkish-Israeli ties. Writing for “GMF Blog,” Sir Michael Leigh, who is a senior advisor to the German Marshall Fund, for example, believes “Israel and Turkey are unlikely to return to the halcyon days of diplomatic and military cooperation.”

It is clear, however, from the official statements issued, that the ultimate aim is in fact to reinvigorate the once strategic ties, especially in view of developments in the region.

Explaining, over his Facebook account, his reason for apologizing, Netanyahu said a major consideration for him “was the fact that in Syria, the crisis is getting worse by the minute.” He added, “It is important that Turkey and Israel, which both border Syria, can communicate with each other.”

Israel’s national security adviser, Yaakov Amidror, also admitted that the threat from Syria was a key reason for the apology. “The more coordination there is between us and the Turks, the easier it will be to deal with a problem that could explode in our face tomorrow morning,” he was quoted saying by AFP.

Meanwhile, the Islamist media in Turkey may be celebrating “Turkey’s victory over Israel,” but the government's statement issued after Erdogan and Netanyahu’s March 22, 30-minute conversation shows this is not a one-way street. The statement said Erdogan informed Netanyahu that relations between Turkey and Israel are of “vital strategic important for regional peace and stability,” adding his “regrets” that they had gone bad.

Erdogan also expressed Turkey’s desire to contribute to efforts to bring about a lasting peace to the Israeli-Palestinian conflict, clearly indicating in this way that Ankara is looking forward to regaining the role it once had in this process, but lost when it fell out with Israel.

Israel also stands to benefit from revitalized Turkish mediation efforts, of course, as it did in the past when Ankara started an indirect process of dialogue between Syria and Israel, even if that effort came to nothing after Israel’s “Operation Cast Lead” in 2008 against Gaza. It is also important for Israel to have Turkish influence over Hamas, aimed at preventing attacks against Israeli targets from Gaza.

Meanwhile, it must be noted that Turkey shares Israeli concerns over Syria’s chemical weapons and its ballistic missiles. President Abdullah Gul has said this openly in various interviews. This was also the prime reason for the Erdogan government when it asked NATO to deploy Patriot anti-ballistic missile batteries in Turkey.

It is also noteworthy that Israeli President Shimon Peres told the European Parliament recently that the free world "cannot stand by when a massacre is carried out by the Syrian president against his own people and his own children.” This echoes remarks made frequently by Erdogan.

A joint Turkish-Israel intervention against Syria is out of the question, of course. But it is clear that Turkey will facilitate more cooperation between NATO and Israel now, which will also mean closer technical coordination in monitoring potential threats to both countries from Syria.

Turkey also allowed NATO to deploy advanced US anti-missile radars in Turkey in 2011 to monitor Iran’s ballistic missile activities. The same system is deployed in Israel, which means coordinating the monitoring of Iran is also in the cards, despite Erdogan’s past insistence that intelligence obtained from the radar system in Turkey will not be shared with Israel.

Not surprisingly, Tehran is crying foul after Netanyahu’s apology. The deputy chief of staff of the Iranian Armed Forces, Gen. Massoud Jazayeri, told the Iranian Fars news agency, “The Zionist regime's apology to Turkey is a new game by the US, the Israeli regime and Turkey to undermine the anti-Israeli resistance movement in the region.”

Tehran is already angry with Turkey for working to topple Syrian President Bashar al-Assad, who the Iranian side considers a vital figure in the “anti-Israeli resistance.” Turkey’s allowing the deployment of NATO radars and Patriot missiles on its territory also elicited angry remarks from Iranian officials.

On the economic side, reconciliation between Turkey and Israel is expected to provide new possibilities for the two countries to cooperate in the energy field. Erdal Saglam, a veteran commentator on economic affairs in daily Hurriyet, for example, believes that an opportunity has now arisen for Ankara to attract gas from Israel’s vast off-shore reserves to Turkey.

Saglam says this is good not just for the two countries but for the West also, since Turkey is becoming a major hub for distributing oil and gas to Europe. Greek Cyprus, which is relying on the vast gas reserves off the coast of Cyprus, and hoping these will help it overcome its current economic meltdown, is clearly worried over these developments. The reason is that it had relied on Israeli cooperation in the energy field after Israel’s ties with Turkey hit rock bottom.

But Israel may be in a position now to convince the Greek Cypriot administration that settling the Cyprus issue equitably, and cooperating with Turkey in the energy field, is the most rational way to go forward for the sake of stability in the Eastern Mediterranean.

One must not get carried away with these notions, however, before it is certain that the Turkish-Israeli rapprochement will actually work since there are still technical hurdles to overcome between the two countries. What is nevertheless clear is that if this rapprochement works it will have positive consequences for the Middle East.