Turkey’s allies still have misgivings about the recent past and direction of Turkish foreign policy. 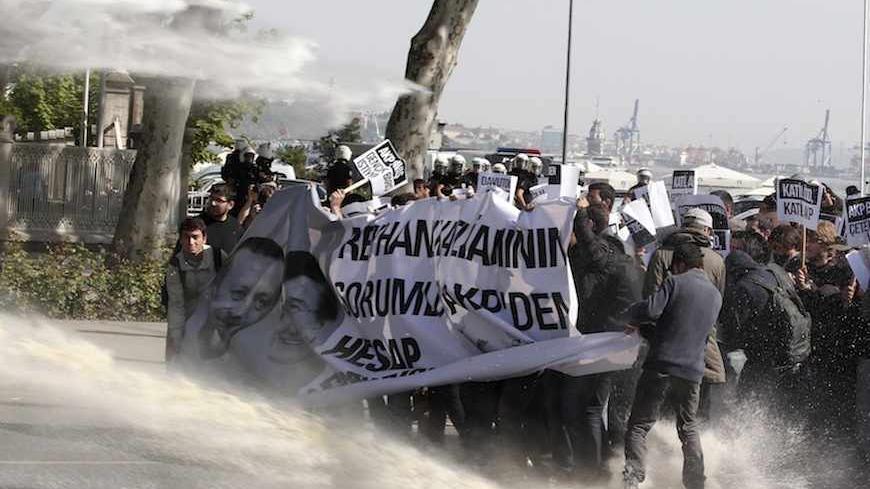 Protesters clash with riot police during a protest against Turkey's Prime Minister Recep Tayyip Erdogan and the Turkish government's foreign policy on Syria, in Istanbul, May 16, 2013. -

Turkey’s foreign policy, especially in the Middle East, was a shining star until the Arab Spring bloomed and misguided developments followed. In the course of the change that began in Tunisia and culminated in the toppling of the Hosni Mubarak regime in Egypt and reached the borders of Syria, everyone in the world was familiar with Turkish Foreign Minister Ahmet Davutoglu’s formula of "zero problems with neighbors policy." That formula was seen as illustrating the success of Turkey’s foreign policy achievements under Prime Minister Recep Tayyip Erdogan’s premiership

With the eruption of the Syrian crisis and its transformation into a civil war and regional proxy conflict, Turkey's "zero problems with neighbors" policy was gradually replaced by a policy of "no neighbors without problems." This wasn’t actually a choice of a new policy but a total reversal of the original policy.

This near-180 degree turn of Turkey’s regional policy has inspired regular ironic remarks. Two weeks ago, I was speaking to the prestigious Independent Turkey Commission, chaired by former President of Finland Martti Ahtisaari, on the developments in Turkey. One person interrupted my talk and sarcastically said, "To have poor relations with all of Israel, Iran, Egypt, Syria, Saudi Arabia and Iran all at the same time is something you can’t do easily, even if you wanted to. That is an extraordinary achievement. What kind of zero problems with neighbors is this?" He omitted two other important political centers: Washington and Moscow.

Davutoglu visited Washington two weeks ago. In addition to his counterpart US Secretary of State John Kerry, he met with Secretary of Defense Chuck Hagel and national security adviser Susan Rice; gave a lecture at the Brookings Institute and held a meeting with Washington opinion-makers in an off-the-record session at the Turkish Embassy. As usual, Davutoglu’s Washington visit was conveyed to the Turkish public as a successful mission. But information reaching us from Washington corridors is not upbeat. For example, an opinion-maker who attended one of the meetings and who has direct access to the White House told me, “The man is too self-congratulatory.”

We know that Hagel told Davutoglu that Washington did not find Turkey’s decision to buy Chinese missiles compatible with its NATO membership. Rice told our minister that despite US President Barack Obama’s securing an "apology" from Israeli Prime Minister Benjamin Netanyahu, Erdogan’s adopting a course that impedes improvement of relations with Israel has disappointed the White House.

No matter what Turkish officials say, the image of Turkey’s government in Washington is nowhere what it was half a year ago, and Davutoglu’s visit wasn’t enough to change it.

Immediately after Davutoglu’s Washington visit, Erdogan went to St. Petersburg. His harsh criticism of the new administration in Egypt and those who have established relations with it brought already severely restrained relations with Cairo to the point of breaking. Egypt lowered the level of diplomatic relations with Turkey and deported the Turkish ambassador in Cairo. Although Turkey appeared to reciprocate, the Egyptian ambassador in Ankara had been recalled months ago.

Erdogan did not stop with his remarks, which further aggravated Egypt relations, and added another blunder to his record at a press conference with Russian President Vladimir Putin by his side. He blurted out, “Save us from the European Union, take us into Shanghai 6.” Just as progress is being made to resume negotiations with the EU after a three-year break, to declare Turkey’s preference for Shanghai 6 instead of the EU, and to say this in the presence of Putin, cannot help but buttress the suspicions of the West about Turkish foreign policy.

Despite its unpromising foreign policy outlook, Turkey is persistently trying to "reset" its foreign policy. Although reluctantly, it removed its objections to the Geneva II conference on Syria, which is now scheduled for Jan. 22. Ankara sees cooperation with the United States and Russia on Geneva II as essential to minimize the damage inflicted by its Syria policy. Turkey is also trying to reformat its relations with Iran parallel to the US-Iran nuclear deal. Turkish newspapers carried friendly photographs of Davutoglu with Iranian Foreign Minister Mohammad Javad Zarif at a Tehran meeting of the Economic Cooperation Organization.

Turkey's most important move is related to political and economic rapprochement with the Iraqi Kurds, who happen to be the only neighbor with zero problems. A short time after Kurdistan Regional Government (KRG) President Massoud Barzani visited Diyarbakir — a place that Kurds see as their "spiritual capital" —  KRG Prime Minister Nechirvan Barzani came to Ankara. It was expected that Turkey and the KRG would be signing the long-ready oil and natural gas agreements during this visit. But this was postponed for a few months, as the full consent of Baghdad and Washington was not yet secured. It was thought best to postpone the signing to a date following Nechirvan Barzani’s visit to Baghdad, Iraqi Prime Minister Nouri al-Maliki’s visit to Ankara and Erdogan’s planned visit to Baghdad and Erbil.

Following the three-hour Erdogan and Nechirvan meeting in Ankara, Maliki’s spokesman said, "We informed Turkey’s Baghdad ambassador that we oppose the signing of an agreement with Kurdistan on pipelines. If there is such an agreement, Baghdad-Ankara relations will be severely damaged."

A similar statement came from US State Department spokeswoman Jen Psaki: "We don’t approve of oil export from any region of Iraq without the consent of the Iraqi federal government. We continue to call on the federal government of Iraq and the Kurdish regional administration to conclude a constitutional solution."

Despite these statements from Baghdad and Washington, the situation may change in the next few months. It has to be borne in mind that Davutoglu was not told of any displeasure about Turkey-Iraqi Kurdistan energy links and pipelines. That could well mean that in the next few months a reconciliation, with US endorsement, between Ankara-Baghdad-Erbil is possible.

Nevertheless, it is not difficult to conclude that Turkey’s efforts to "reset" its foreign policy will not be all that easy.

"Davutoglu has visited Baghdad and met key Shiite and Sunni leaders while also cultivating ties with Iran. Turkey is seeking the assistance of both countries to contain the fallout from the Syrian quagmire, including the reduction of the ceaseless flow of refugees along the porous 910-kilometer (565-mile) Turkey-Syria border.

"Nonetheless, the abrupt change of direction will probably not repair the tensions on a durable basis. Countries in the region suspect that Turkey is merely reacting to developments and is not committed to a balanced foreign policy.

"After all, Turkey’s rapid shifts in the past — from befriending to outright hostility toward Maliki and Syrian President Bashar al-Assad for example — will most likely reinforce those perceptions."

Not only those mentioned in the quotation above, but allies and friends of Turkey also have misgivings with regard to the direction of Turkey’s foreign policy. These sentiments stem from their perception of Erdogan himself. They see him as “unpredictable” and hence unreliable. Repairing or overcoming such a negative perception is even more difficult.