Foreign Minister Ahmet Davutoglu's recent visit to Baghdad, Najaf and Karbala is the latest sign of a new, dual-track policy on Iraq that is endorsed by the United States. 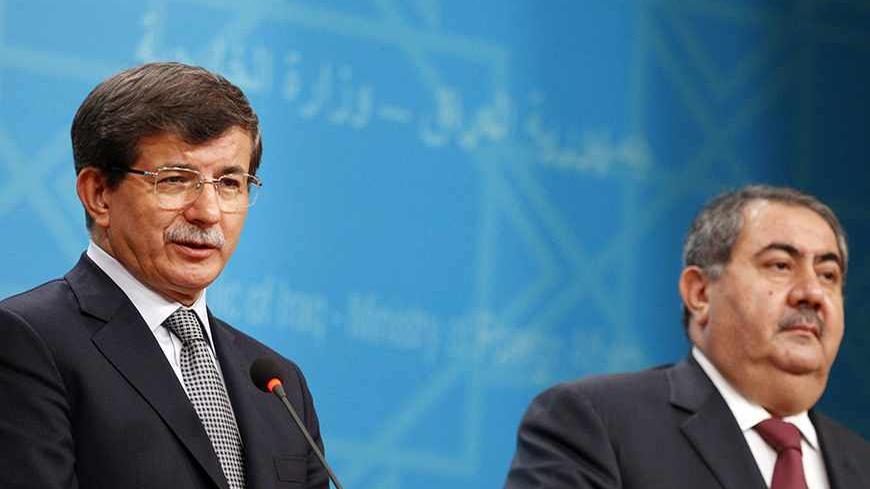 The flurry of diplomatic activity involving the Middle East continues to gain speed on a number of fronts, revealing efforts at new alignments, such as between Moscow and Cairo. Turkey too is wasting no time in trying to overcome its recent isolation in the region and return as an active player.

Turkish Foreign Minister Ahmet Davutoglu, following up on his Iraqi counterpart Hoshyar Zebari’s visit to Ankara at the end of October, flew to Baghdad on Nov. 10 to sustain the growing momentum between their two countries as they try to overcome differences on a number of issues. Davutoglu and Zebari are also trying to establish a proactive agenda whereby Turkey and Iraq can work together to reduce regional sectarian tensions that have been on the upswing. While in Iraq, Davutoglu was not only warmly received by Prime Minister Nouri al-Maliki, but also broke new ground for Turkey by visiting Najaf and Karbala, the holiest of the Shiite cities.

Al-Monitor’s Ali Mamouri, in his Nov. 13 post, explains the significance of these visits during the Shiite holy month of Muharram. He also provides information on the talks Davutoglu had in Najaf with Grand Ayatollah Ali al-Sistani and the Shiite cleric and leader Muqtada al-Sadr.

Davutoglu's visit represents a new phase of outreach to the Shiites and indicates that Ankara is trying to pull itself back onto neutral territory after having openly favored the Sunnis in Syria, thus contributing to the region’s sectarian divisions. These latest steps by Turkey also come at a time when Ankara and Tehran, whose relations were also strained over Syria, have decided to open a new chapter in their relations as well.

Tensions first emerged between the governments of Prime Minister Recep Tayyip Erdogan and Maliki after Maliki accused Erdogan of underhandedly supporting Iraq’s minority Sunnis against the Shiites. Tensions peaked when Ankara provided refuge to Iraqi vice president Tariq al-Hashimi, a prominent Sunni leader accused by the Maliki government of having set up anti-Shiite death squads. A Baghdad court handed down a death sentence for Hashimi, in absentia, in 2012. Erdogan dismissed the charges against Hashimi and vowed never to hand him over.

Another source of tension has been the energy talks between Turkey and the Kurdistan Regional Government (KRG) in northern Iraq and the energy deals Turkish companies have been concluding with Erbil over Baghdad’s head. Ankara’s friendly onslaught toward Baghdad has not, however, resulted in a diminishing of Turkish-KRG ties. To the contrary, Erdogan invited KRG President Massoud Barzani to the predominantly Kurdish city of Diyarbakir, and the visit, scheduled for the weekend of Nov. 15, is considered to be as groundbreaking as Davutoglu’s Najaf and Karbala excursions.

Barzani’s visit will be closely monitored by Washington. The Obama administration announced on Nov. 12 that Vice President Joe Biden had had a phone conversation with Barzani that day, during which they discussed “Iraq’s security challenges and the need for close coordination between Erbil and Baghdad to isolate terrorist networks.” According to the statement, they also touched on “Iraq’s important progress in building relations with its neighbors, including Turkey.”

There appears to be a diplomatic warning here to the KRG to cooperate with the Maliki government against terrorism, while avoiding disrupting the Turkish-Iraqi rapprochement. The United States has backed Maliki on the issue of Turkish-KRG ties, arguing that they risk endangering Iraq’s territorial integrity.

Ankara, Baghdad, Erbil and Washington all agree, however, that the declaration of autonomous cantons in northern Syria by the Kurds under the banner of the Democratic Union Party (PYD) is detrimental to Syria’s territorial integrity. Keeping Syria intact is crucial for these states if chaos is not to reign in the region. This provides them with important common ground for working together. The PYD is an offshoot of the Kurdistan Workers Party (PKK), which has been waging a separatist campaign of terrorism in Turkey for nearly three decades. The PYD's action comes at a time when Erdogan is trying to solve Turkey’s Kurdish problem by democratic means, which also involves talks with the PKK.

All signs indicate that Ankara does not want to endanger the new and positive atmosphere with Baghdad and has been assuring Maliki and Washington that it is committed to maintaining Iraq’s territorial integrity. As Al-Monitor’s Fehim Tastekin explains in his piece posted on Nov. 15, there are also concrete reasons why Ankara is not prepared to ditch Barzani. Erdogan wants “to kill four birds with one stone,” as Tastekin puts it, by inviting Barzani to Diyarbakir, even if the visit takes place during a delicate moment in Turkish-Iraqi ties.

Erdogan is seeking the following:

All of this indicates that Ankara has not only decided on a multidimensional approach to the Middle East — a return to its “zero problems with neighbors” policy — but is also maintaining a dual-track policy on Iraq based on courting Baghdad while developing ties with Erbil.

The escalation of violence in Iraq by al-Qaeda-related groups attempting to fuel sectarian conflict makes the Maliki government more amenable, diplomats in Ankara say, to pursuing peace with Turkey at the moment, despite continuing differences between the two countries. During a press conference Nov. 13 in Ankara with Azeri President Ilham Aliyev, Erdogan revealed that Turkish parliament Speaker Cemil Cicek would soon go to Baghdad, followed shortly by a visit to Ankara by Maliki, during which the dormant “Turkey-Iraq High Level Strategic Council” will be reactivated. Erdogan added, “After that, there will be my return visit [to Baghdad]. I believe that in this way we will make an important contribution to peace in the region.”

The current opportunity appears to be one the Maliki government does not want to miss as well, so the Iraqis seem prepared to not let former grievances spoil the congenial atmosphere. The recent developments represent a collapse of Erdogan’s Sunni-driven and morality-based foreign policy, most apparent in Syria but now giving way to a more neutral and pragmatic approach with the aim of regaining lost ground by mending fences with all involved.

Peace with Iraqi Shiites is bound to pave the way for a much better atmosphere between Turkey and Iran, where public opinion has turned against Ankara because of Syria. In many ways, Davutoglu is back in his element, having always aspired to be a peacemaker in the region. What effect Ankara's new proactive approach will have on Turkey’s ties with Egypt, still strained due to the coup there, as well as almost nonexistent Turkish-Israeli relations, remains to be seen. Erdogan and Davutoglu know, however, that they will have to deal with these two items sooner or later if the zero-problems approach is to have any meaning and if Turkey is to return to the region as an influential player that contributes to stability.