How Turkey lost its influence in Iraq

Ankara's tilt toward the Kurdistan Region of Iraq has undermined its once considerable influence in Iraq. 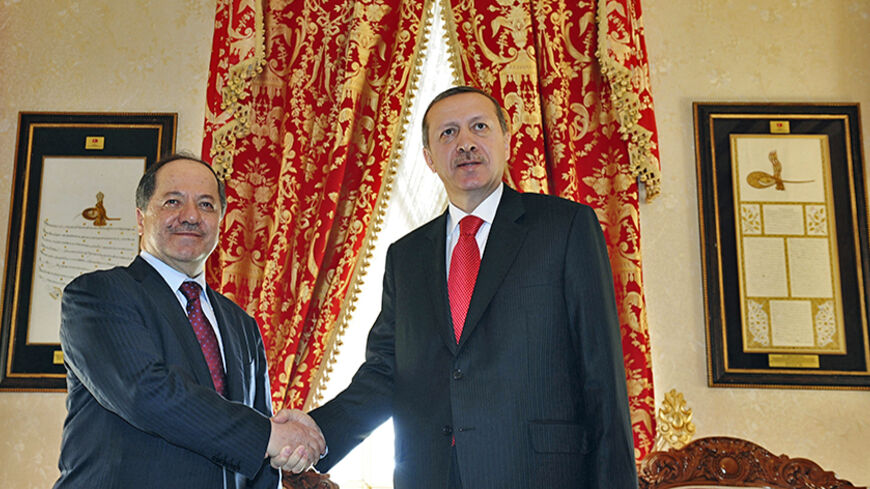 Turkey's bid to throw its lot into a controversial oil deal with the Kurdistan Regional Government (KRG) has so far proven to be a losing hand in Iraq.

Al-Monitor's Denise Natali indicated in her May 29 article that the move shows the extent to which Ankara and the KRG are willing to defy Baghdad.

In a further sign of that defiance, KRG Prime Minister Nechirvan Barzani told the Iraqi Kurdish parliament in Erbil this week that a 50-year energy accord had been signed with Turkey.

Baghdad considers Turkey’s complicity in the still-murky deal, which will likely be challenged in international arbitration, as contributing to Iraq’s political crisis, and has lodged a complaint against Turkey with the Paris-based International Chamber of Commerce.

Washington also continues to oppose this cooperation between Turkey and the KRG.

Turkey, however, denies that its energy ties with the KRG — which it maintains are in accord with the Iraqi Constitution — are contributing to the division of Iraq. Turkish Energy Minister Taner Yildiz says that Turkey is “a neighbor, friend and fraternal country that is laying the basis for the transmission of Iraqi oil to world markets.”

Baghdad, however, insists that the KRG does not have the right to explore and exploit the country's oil independently, and government officials contacted by Al-Monitor believe this application will take a long time to process and go nowhere.

Some industry analysts agree, and argue that Turkey and the KRG are likely banking on that the reality on the ground will trump any protracted legal challenge.

Turkey’s “all-in” approach with the Kurds are a setback to what was a fledgling and ill-fated effort to reset acrimonious Baghdad-Ankara ties during the October 2013 visit of Iraqi Foreign Minister Hoshyar Zebari to Ankara for talks, and followed up by a visit to Baghdad by Turkish Foreign Minister Ahmet Davutoglu the next month.

In Iraq, Davutoglu also visited the holy cities of Najaf and Karbala, and met with religious leaders in an effort to reach out to Iraqi Shiites, who have been unhappy over what they see as Ankara's sectarian policies favoring the Sunnis.

Davutoglu also announced in Iraq that a decision had been made to resume the stalled meetings of the "High Level Strategic Cooperation Council" set up between Turkey and Iraq in 2009. He added that Iraqi Prime Minister Nouri al-Maliki would visit Ankara in December, or January 2014. A return visit by Prime Minister Recep Tayyip Erdogan to Baghdad shortly after was also planned.

These announcements were taken by diplomats in Ankara as indications that Turkey was set to chart a new course with Iraq. Hopes were also raised that Turkey would mediate between Baghdad and Erbil over their energy dispute.

Over seven months have elapsed since Davutoglu visited Baghdad and there is no sign yet as to when the high-level contacts mentioned by him will take place. Maliki is trying, of course, to establish his new government following the elections in April, but there are no indications that he will be arriving in Ankara anytime soon, even if he forms his new government.

All of this is a far cry from the heady days prior to 2010 when ties between the two countries appeared firm and when Ankara had considerable influence in Baghdad.

Erdogan, accompanied by most of his cabinet, had traveled to the Iraqi capital in October 2009 for the first meeting of the High Level Strategic Cooperation Council, during which no less than 48 documents were signed covering cooperation in fields ranging from energy and security to health and agriculture.

Official US cables leaked by WikiLeaks to various newspapers also indicated that Turkey was considered by Washington at the time as having forged one of the best relationships with the Iraqi government, and was also playing an important role in helping negotiate the withdrawal of US troops from Iraq.

In the meantime, Turkey's influence in persuading the Sunni minority in Iraq, which lost its privileged position after the ousting of Saddam Hussein in 2003, not to boycott the political process but partake in it, also stood in good stead with both the Iraqi government and Washington.

Ironically, one of Ankara's main objectives at the time was to curb the political aspirations of Iraqi Kurds and prevent Northern Iraq from gaining an autonomous status, in the fear that this would encourage Turkey's own restive Kurds.

In 2009, Iraqi Kurdish politicians accused Murat Ozcelik, Turkey's ambassador to Baghdad, of interfering in Iraq's internal politics by trying to influence the drafting of the country's new electoral law in line with Ankara's desires. In retrospect, adding to the irony was that Turkish politicians were accusing the United States then of conspiring to establish an independent Kurdistan adjoining Turkey.

The tables have turned today and Turkey is openly siding with the KRG against Baghdad, much to Washington's consternation. The first signs of a souring of relations between Ankara and Baghdad emerged with the 2010 parliamentary elections in Iraq, when Shiite politicians also started complaining about Turkish meddling in Iraqi politics.

Ankara at that time favored the Iraqi National Movement, or "al-Iraqiya," led by Ayad Allawi, the prominent secular political activist and a former interim prime minister. In December 2010, The New York Times cited a cable by Christopher R. Hill, the US ambassador to Baghdad, leaked to the press by WikiLeaks, in which ambassador Ozcelik was said to have opposed Maliki's re-election.

According to Hill, the Turkish ambassador told US diplomats that if Maliki were re-elected he "would focus on increasing his own power and would not be cooperative in resolving outstanding issues." The Iraqi elections, however, failed to provide the results Ankara desired and Turkey emerged as one of the main losers.

Meanwhile, the Erdogan government's stance prior to the elections was noted by the Maliki government. The Syrian crisis that broke out shortly after in 2011, on the other hand, sharpened the sectarian sensitivities between Ankara and Baghdad.

Relations worsened after Turkey gave refuge to Iraqi Vice President Tariq al-Hashemi, a prominent Sunni politician, who was accused in 2011 of setting up anti-Shiite death squads and later sentenced to death in absentia by a court in Baghdad.

The subsequent rapid developments in Turkish-KRG ties, especially in the strategic energy field, merely contributed to worsening what were already tense ties between the Erdogan and Maliki government.

This situation continued until the attempt to break the ice in October and November 2013, which was also prompted by shared concerns over the escalating chaos in Syria.

That attempt, however, has turned out to be more of an uphill struggle than initially thought.

Meanwhile, Ankara and Erbil appear determined to forge on with their ties despite objections from Baghdad and Washington. Harith Hasan indicates in his May 30 article for Al-Monitor that the KRG risks isolation in Iraq by exporting oil through Turkey.

It is clear that developing ties with Turkey is not endearing Kurds to their Arab neighbors. Whether this is of any immediate concern to the Iraqi Kurds, however, is questionable. Their region, after all, is the only one in Iraq that appears to be going anywhere.

“Kurdistan represents everything that has not happened in Shiite-dominated Baghdad and the Sunni regions of Iraq, where Prime Minister Nouri Kamal al-Maliki has behaved like a visionless, pro-Shiite sectarian chief and violence remains rife,” Thomas Friedman of The New York Times wrote on June 4.

Turkish officials appear to be banking the expectation that Washington will ultimately do little, other than stating its dissatisfaction over developing Turkish-KRG ties, given the stability in Northern Iraq where some leading US oil companies are also doing business. The United States will close its markets to direct Kurdish oil sales, of course, but Kurdish officials appear confident that there are other markets they can access.

Meanwhile, Turkish government officials were not concerned over a motion submitted by the main opposition Republican People's Party (CHP) this week for a parliamentary inquiry over Ankara's decision to allow the shipment of Kurdish oil to world markets through Turkey. The motion is destined to be rejected by government deputies who hold the majority in parliament.

The bottom line appears to be that Turkish-Iraqi ties will remain in the doldrums for now given this background, at least until such time as Baghdad and Erbil come to a common understanding over their energy resources.