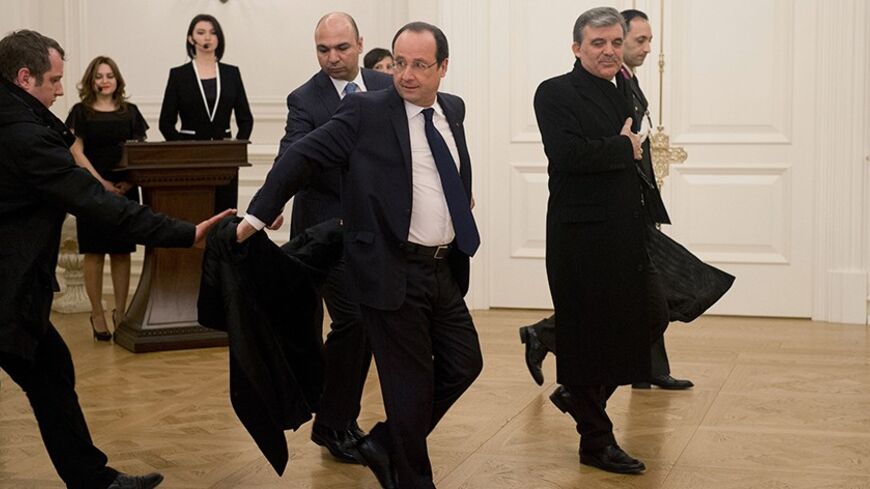 French President Francois Hollande hands his overcoat to a bodyguard as he arrives with Turkish President Abdullah Gul to attend a state dinner in Ankara, Jan. 27, 2014. - REUTERS/Alain Jocard/Pool

Developments are moving so fast in Turkey that an issue that might occupy the agenda elsewhere for weeks lasts no more than a day. This was the case with French President Francois Hollande’s two-day visit to Ankara and Istanbul.

Turks had been waiting for this visit for months, with high hopes for a new page being turned on Turkey and the European Union in their relations. There was such a firm belief that the real obstruction to Turkey’s EU accession was France, in particular former President Nicolas Sarkozy, that Hollande’s taking over gave rise to expectations that the path of Turkey-EU relations would now be smoothed. Hollande’s visit was a concrete symbol of this desire and optimism for the future.

The fact that Hollande was to become only the third French president to pay an official visit to Turkey — following in the footsteps of Charles de Gaulle in 1968 and Francois Mitterrand in 1992 — was given great significance. Sarkozy had also visited Ankara, in 2010, but in an unofficial capacity having nothing to do with bilateral relations and only for a few hours.

Something totally irrelevant to relations, however, made Hollande's official visit especially juicy for paparazzi media outlets. His relationship with Valerie Trierweiler — his companion who held a place in matters of protocol although they were not married — had just ended because of his relationship with another woman. For Hollande to make a public appearance in Turkey fewer than two days after announcing the relationship was over naturally captured the attention of paparazzi of all sorts and certainly the French.

Turkey’s incredibly loaded agenda and hard-to-close rifts with France did not allow relations to develop during Hollande's stay. His joint press conference Jan. 27 with President Abdullah Gul and his contacts the next day in Istanbul signaled that the two countries had agreed to “civilized” relations in “agreeing to disagree." In the end, Hollande’s “civilized” separation from the women with whom he had been living and the calm fashion in which Turkey and France expressed their differences were the main highlights of the first official visit by a French president in 22 years.

Hollande did not neglect to mention French laws that make it a crime to deny the Armenian genocide, which is already straining nerves in Turkey as the 100th anniversary, in 2015, approaches. The president met with the family of the Turkish Armenian journalist and democratic activist Hrant Dink, who was assassinated in Istanbul in 2007. He also met with the chairman and leaders of the Turkish Industry and Business Association (TUSIAD), whom only a few days earlier Prime Minister Recep Tayyip Erdogan had accused of “treason.”

Before the public understood what Hollande’s visit had produced and how it should be digested, Erdogan flew to Tehran. Before his departure, he referred to the unstoppable rise of the dollar against the Turkish currency and announced that he opposes an interest rate increase. The same night he arrived in Tehran, the Monetary Council of the Central Bank announced the decision taken at an extraordinary meeting to increase interest rates by a “shock” ratio.

Economic measures and even high interest rates could not impede the rising dollar, so Turkey, which had already been classified as one of the “fragile five markets,” instead of an “emerging market,” was re-branded as the “foremost fragile” economy. This development overshadowed Erdogan’s Iran contacts, although it was his first visit there after a two-year absence and now with Turkey’s entanglement with Iran in Syria (and all over the region), the Geneva II conference and Iran's nuclear deal all on the agenda.

Erdogan’s Iran contacts were the subject of interesting assessments in quarters in the region that follow that issue from three different perspectives. One of these observers, Muhammed Noureddine, has close relations with Iran and is believed to reflect the views of Hezbollah, which represents a large proportion of Lebanon’s Shiites. He has the reputation of being the “Turkey expert” in Lebanon. This is what he wrote in the daily As-Safir:

Turkey is not giving away anything politically in return for its gains in economy … Turkey wants to use its relationships with Iran as a way to compensate for its failures in the region from Syria to Egypt, Saudi Arabia, and Israel … Iran is most likely aware of that. Naturally, Iran cannot reject [Turkey’s] extended hand. However, Iran would not want to see a repeat of its experience with the Muslim Brotherood in Egypt. Iran had supported that group, but the only response it got was from the deposed, President Mohammed Morsi, who said that he will not rest until the fall of the Syrian regime …

Iran has an interest in keeping all the [doors] open in the context of its regional and international opening-up, especially in light of the nuclear agreement. However, the quest of Turkish Prime Minister Recep Tayyip Erdogan to break his political isolation on the regional and international levels cannot be achieved only by paying an economic price. A political price must be paid first.

What is that political price, or what might it be? As-Safir’s contributor did not specify or elaborate.

The daily Al-Sharq Al-Awsat — which promotes the views of Saudi Arabia, which is in a fierce struggle with Iran and whose relations with Turkey soured around events in Egypt — carried an article by Samir Salha:

Iran views Ankara as the launch pad for the project to remove Iranian influence from Syria, thereby depriving Tehran of one of its most important strategic cards. This is why the Iranian leadership has reacted so strongly to Turkish attempts to keep Iran out of Geneva II. While the Iranians have responded by affirming that their regional security goes beyond Syria and includes the Lebanese coast [sic].

Turkish authorities have claimed that Iranian espionage cells are operating in Turkish territory, including meetings between Iranian security officers and Turkish youth affiliated [with] the opposition [Kurdistan] Workers Party. There has even been talk about the revival of the Turkish [Kurdish] Hezbollah.

Iran has been angered by its not being invited to attend the Geneva II peace talks, along with Turkey’s position on the issue and the Syrian crisis as a whole. Following the nuclear agreement between the West and Tehran, and with many believing the Iranians could finally agree to abandon the Damascus regime in return for their being allowed to protect their influence in a post-Assad Syria, Turkey and Iran may find themselves on a collision course in the near future.

The Israeli website DEBKAfile, generally believed to produce assessments based on its intelligence and security connections, wrote, “Erdogan has snapped his links with Washington and rushed into Iran's arms for direct action against US interests. He is spiting the Obama administration in the belief of a US plot to replace him with President Abdullah Gul and discredit him by corruption scandals implicating members of his family in sanctions-busting business with Iran through the state-owned Turkish Halkbank.”

This is an interesting point because the most crucial angle of the bribery and corruption investigation that erupted in December and continues to rattle the Erdogan government is about Iran. That Turkey had been engaged in trade in gold with Iran in circumvention of UN sanctions and that this was done through Halkbank were at the center of the investigation. Iranian businessman Reza Zarrab, who emerged as the lead actor in all this, is still in prison. Then, on top of all that, on Jan. 25 the Hurriyet banner headline informed that in 2011 Zarrab had sent $1.5 million via Turkey for the assassination of Saudi Arabia’s ambassador to the United States.

In the meantime, there were reports on the arrival in Ankara of David Cohen, US Treasury undersecretary for terrorism and financial intelligence, a day before Erdogan’s departure for Tehran. He came to deliver the message that "it is too early to make business with Iran. Wait." This same official had visited Ankara on Dec. 19.

How then is one to read Erdogan’s remark in Tehran that “after two years separation, we feel we are in our second home” and his announcement of the creation of a high-level Council for Strategic Cooperation between Turkey and Iran after his meeting with President Hassan Rouhani? Turkey had signed similarly titled agreements with Syria and Iraq, but today Erdogan and Syrian President Bashar al-Assad are parties to a zero-sum game, while Erdogan and Iraqi Prime Minister Nouri al-Maliki appear unable to overcome the tensions between them.

Although there is talk of a rapprochement between the United States and Iran, it is too early to predict whether this will allow Turkey to distance itself from Washington to develop a special relationship with Tehran. In fact, at least for today, to say the opposite is more realistic. One valid conclusion, however, is that all the above reflects Turkey’s multiple problematic choices rather than the assets of a multifaceted foreign policy.