Iran Unsure What to Expect From Hollande's First Summit

Reports from Tehran indicate animated debates among Iranian diplomats in anticipation of Francois Hollande’s inauguration as France’s president on Tuesday, with some speculating on the material impact his arrival will have on the nuclear summit scheduled to take place next week in Baghdad, writes Shahab Mossavat. 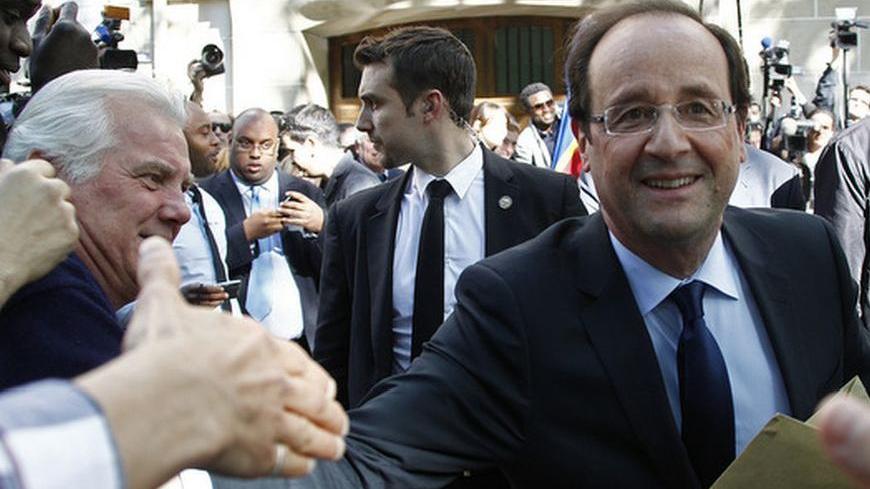 Reports from Tehran indicate animated debates among Iranian diplomats in anticipation of Francois Hollande’s inauguration as France’s president on Tuesday [May 15, 2012], with some speculating on the material impact his arrival will have upon the EU3+3’s nuclear summit with Iran scheduled to take place next week in Baghdad.

One group of analysts in Tehran’s Foreign Ministry with close links to Supreme Leader Ali Khamenei is relieved to see the back of Sarkozy, whose populist but modern politics were viewed with suspicion. They have been buoyed by the high-profile visit of former French prime minister Michel Rocard, who was received by Iranian Foreign Minister Ali Akbar Salehi in Tehran on Saturday. Hossein Ebrahimi, deputy head of the Iranian Parliament’s National Security and Foreign Policy Committee, welcomed the visit, saying, “Although such visits are usual after changes take place in the political system of any country, Rocard’s trip to Iran shows the new French statesmen do not intend to continue Sarkozy’s approach to Iran.”
However, the president-elect’s transition team says the visit by Rocard to Iran was a totally private one, despite its portrayal in the Iranian media as a diplomatic mission.
Notwithstanding which, another group closer to President Mahmoud Ahmadinejad and led by Saeed Jalili, secretary of Iran’s Supreme National Security Council views the potential for conciliation as undermining their own stern radicalism, and have been counselling against the danger of honeyed words offered by the incoming administration in Paris or its envoys. Emerging from his separate meeting with Monsieur Rocard, Mr Jalili was quick to stress that, “The time for pressure tactics is over" and that "Any miscalculation by the West will prevent the negotiations from being successful.”
While foreign policy did not figure large in France’s presidential debate, it would be disingenuous to imagine it did not matter. Ambassador Mohammad Farhad Koleini, a career diplomat who is a close advisor to Iran’s Supreme Leadership Council on strategic issues, says, “The effects of the left’s victory upon France’s relations with Iran, Syria and the Middle East in general are of crucial importance.”
However, the first task facing President Hollande is to restore hope to a thoroughly dispirited and divided nation, a France in which issues of identity have become thoroughly confused, and where the democratic system is under a huge strain following significant gains by the far-right and more modest ones by the far-left. To address the bleak economic situation he inherits, Hollande plans to make changes in several areas, not least by plotting a very different foreign-policy course for France. Where Sarkozy was anxious to assert France’s international role through muscular engagement, Hollande recognises such a strategy comes with a huge price tag, and is determined to retrench, making cuts in France’s military spending.
Sarkozy sought to adjust France’s relations with Islamic Iran within the political framework of the European Union, where he took a hard line, and within the context of negotiations between Iran and the EU 3+3 Group, where he ensured sanctions would be imposed. By intensifying the punitive nature of the measures against Tehran, Sarkozy tried to present himself and his government as the pivotal bulwarks against Iran.
Those close to Hollande believe such an attitude is more in line with the wishes of those lobbies that sought to bolster their influence inside the French government than in the national interests of France.
Instead the new Socialist administration will stress the efficacy of sanctions as a practical lever with which to bring Iran to heel. Jean-Louis Bianco, chief of staff of France's last Socialist president, François Mitterrand, and author of a parliamentary report on Iran, says economic sanctions against the Islamic Republic have been productive and that under Hollande the “line would be one of great firmness … however … France would oppose armed intervention, even if Iran does develop a nuclear weapon … [and] won't support an Israeli or American military action in Iran .... An Israeli strike won't prevent the Iranians from continuing" their nuclear program, he insists.
It may be assumed, therefore, that Hollande will restore France’s traditional ambivalence toward the United States, as well as its unstated pro-Palestinian stance. Ironically, these are largely Gaullist principles underlining France’s independence, and contrast strikingly with the outgoing president’s Atlanticist leanings and pro-Israel pronouncements.
The Baghdad meeting on May 23 offers Monsieur Hollande a first and potentially irresistible opportunity to revise France’s policies toward Iran.
“The rise to power of Hollande does not constitute an opportunity only for one side, but should be seen as an equal opportunity for all parties,” says Ambassador Koleini. “In other words, the French elections have opened up a window for the European Union to rectify its behavior toward the Islamic Republic so as to create a new sphere for bilateral cooperation.”
This may be a case of the Islamic Republic of Iran projecting its own best-case scenario. However, with Sarkozy gone, the biggest cheerleader for the hawkish strategy is removed, and Hollande has much bigger travails to deal with at home and in the EU, and the temptation to "pause and park" the Iranian crisis may be too great to pass up on.

The Iranians are anxious to make a favorable pitch to the new president and have been lobbying hard. They point to past cooperation in the Middle East, Persian Gulf and the Caucasus. Given France’s historical links with Syria and Iran’s strategic alliance with the Assad regime, strategists in Iran plan to make this a key issue with which to "hook" the French. As a whole, Tehran hopes to advocate Damascus’ case by stressing the risks presented by the overthrow of the Alawite minority, and the opportunity this would give Salafists sympathetic to Al-Qaeda.

Furthermore, Tehran calculates that the global economic crisis, and more specifically the currency crisis ravaging the European Union, will force its Western critics to perform an about-face on the nuclear issue. And Iran will begin by testing France’s resolve by offering it key industrial concessions. Iran hopes that by driving a wedge between France and its Western allies, it can undermine the sanctions’ regime as a whole. However, this is a huge gamble, and given the crippling impact sanctions have already had on Iran’s economy, it is unlikely that France would be willing to break ranks at this stage. However, should France’s rhetoric change, then Tehran will feel it has gained a strategic victory, and the threat of war would recede.
The situation is made more interesting still, given the fluid current of political events. From Greece to Germany, Russia to the United States, change is afoot, and France as a pivotal nation, a leader in the EU, a member of NATO, and with a permanent seat on the United Nations Security Council has a major role to play.
Looking ahead it may be expected that the presidency of Hollande will usher in a more moderate approach, where in general France will endeavour to pursue a balancing role in the United Nations Security Council and seek a consensual, multilateral approach.