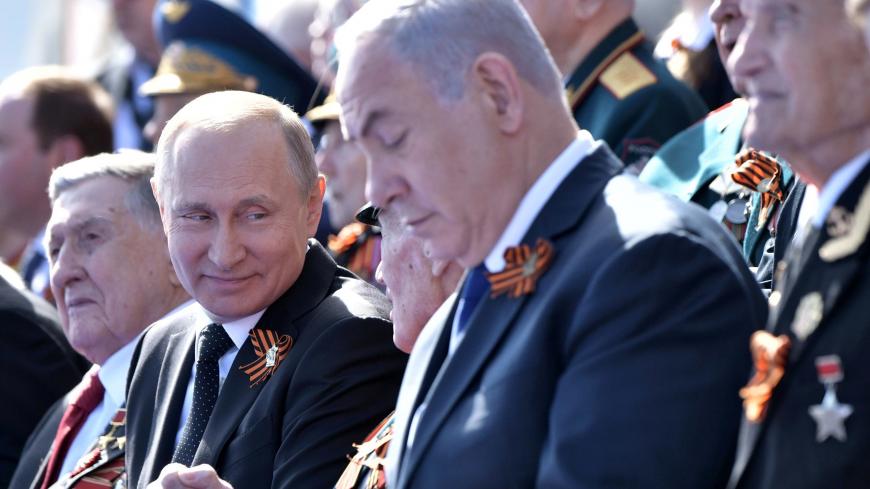 Following the Trump administration’s decision to withdraw from the Joint Comprehensive Plan of Action (JCPOA), Russian President Vladimir Putin may be the best bet, or last man standing, to offer a diplomatic off-ramp for Israel and Iran to avoid war.

Two weeks ago, this column observed that Russia might be well-placed as a potential mediator between Iran and Israel, a trend Al-Monitor has followed for over four years. That role places Putin on a tightrope balancing Russia’s all-in support for the Syrian government, while facing the limits of Moscow’s uneasy but vital relationships with both Iran and Israel and reckoning with a continued slide in US-Russia relations. The regional picture is additionally complicated by the US decision to relocate its embassy to Jerusalem, the Palestinian demonstrations in the Gaza Strip, the absence of an Israeli-Palestinian diplomatic track and Hezbollah’s win in Lebanon’s elections.

The events of the past week reflect this new direction and urgency in Putin’s approach to the region. On May 8, the Russian Foreign Ministry slammed Trump’s decision on the JCPOA as “new confirmation of Washington’s intractability. They also show that the US objections to Iran’s absolutely legal nuclear activity are nothing but a smokescreen for settling political scores with Iran,” adding that “Russia is open to further cooperation with the other JCPOA participants and will continue to actively develop bilateral collaboration and political dialogue with the Islamic Republic of Iran.” The next day Moscow slammed new US sanctions on Russia “allegedly for violating the Iran, North Korea, and Syria Nonproliferation Act, which has no connection to Russia. In effect, this US decision has been precipitated by a trivial desire to get even with Russia over the failed missile attack on Syria, which the United States, Britain and France launched on April 14 in violation of international law."

Perhaps most telling of Putin’s diplomatic turn was the visit of Israeli Prime Minister Benjamin Netanyahu to Moscow on May 9. Netanyahu was accorded a seat of honor on the occasion of Victory Day, which commemorates the Soviet Union’s victory over Nazi Germany in World War II. The Israeli prime minister gave a moving testimonial to the sacrifices of Russian soldiers in liberating the Auschwitz concentration camp.

Netanyahu claimed that he was able to persuade Putin to delay the sale of advanced weapons, including S-300 missiles to Syria. Israeli warplanes struck Iranian military targets inside Syria on May 10, the very next day, suggesting that Netanyahu may have given Putin advance notice of the attack. The Russian reaction to the incident was muted, while highlighting Russian mediation. “In our contacts with Iranian and Israeli leaders, including at the May 9 meeting between President of Russia Vladimir Putin and Prime Minister of Israel Benjamin Netanyahu, we have repeatedly noted the need for both sides to avoid any actions that would provoke the other,” said Russian Foreign Minister Sergey Lavrov. “Iran and Israel assure us that they have no such intentions, but, as you know, incidents, nevertheless, happen. It is particularly alarming that they occur despite the fact that all of us have underscored our commitment to respecting the sovereignty and territorial integrity of Syria.”

Maxim Suchkov explains that “Netanyahu understands he can’t sway Russia from its position opposing the US exit from the nuclear Joint Comprehensive Plan of Action (JCPOA). Therefore, while with Trump, Netanyahu sought to arm the US president with arguments for leaving the JCPOA, but with Putin, Netanyahu seeks to expose the ‘malignant nature of the Iranian regime’ and thus legitimize Israeli efforts at countering it. The latter is a hard sell with the Kremlin, but Netanyahu hopes that there is a chance that if Russia has heard the essence of Israeli concerns, Putin would be (a) more persuasive with Iran on its actions in Syria and (b) have a higher tolerance level for Israeli’s actions in Syria, and perhaps against Hezbollah in Lebanon.”

Suchkov reports that there is a deconfliction "hotline" between the Russian Khmeimim air base in Syria and the Israeli Kirya command center in Tel Aviv, and concludes that “while the parties still seek to lure Moscow to their own camp, they are also discovering that Russia’s role as the only ‘go-to’ entity for bilateral ‘matters of life and death’ might just be beneficial for them all. Therefore, whereas Putin may have genuine empathy for Netanyahu’s concerns and sincerely appreciate his symbolic overtures, he’d still be interested in listening to the opposite camp and measuring the recent moods in Damascus and Tehran. In this regard, one shouldn’t be surprised to see a high-level visitor or two from Syria or Iran to Russia rather soon.”

Turkish president tells Rouhani US decision on JCPOA is "wrong"

Erdogan said the United States will be the loser from the Trump administration’s decision to withdraw from the JCPOA while telling his Iranian counterpart, Hassan Rouhani, that the US decision is “wrong.” Turkish presidential spokesman Ibrahim Kalin said, “We do not wish the Iranian people to be negatively affected by these sanctions and we won’t hesitate to do our part if we’re to do something about them.”

Amberin Zaman writes that the “the timing of the US withdrawal [from the JCPOA] will have shifted Turkish conspiracy thinking into even higher gear.”

Zaman explains, “Iran is among Turkey’s top suppliers of oil and natural gas and a vital land bridge for Turkish truckers carrying goods to Central Asia. They are unable to access the region via neighboring Armenia, a far shorter route, because of Ankara’s refusal to open its borders with the former Soviet republic out of solidarity with Armenia’s top enemy Azerbaijan. The longtime regional rivals share a porous mountainous border and a common fear of Kurdish separatists active on both sides. The fear of Kurdish gains overseen by US forces in northern Syria has propelled Iran and Turkey into shelving their differences over the Syrian regime and their respective claims of leading Shiite and Sunni Muslims and forming an alliance with Russia.”

Adding to Turkish conspiratorial thinking is that “the decision comes as a federal court in Manhattan prepares to sentence Mehmet Hakan Atilla, a Turkish banker accused of involvement in a Byzantine scheme that saw Turkey’s state-owned Halkbank allegedly conspiring with now jailed Iranian-Turkish gold trader Reza Zarrab to launder hundreds of millions of dollars through the US financial system on behalf of Iran. Erdogan and assorted Turkish officials have long charged that the case is part of a global plot to undermine Turkey. Meanwhile, Turkish businessmen nervously await the scale of an expected fine to be levied on Halkbank by the US Treasury and its likely effects on Turkey’s wobbly finances.”

Erdogan’s bravado may obscure alarm over the potential impact on Turkey of the renewal of US secondary sanctions on Iran. Fehim Tastekin reports, “Although some analysts think the new sanctions will not affect trading with Iran, some are predicting much tougher days ahead. Turkey — which had taken advantage of some tolerance by the United States earlier — is this time under strict surveillance, accused of breaking the original sanctions via Turkey’s state-owned Halkbank.”

Tastekin adds, “Turkish-American political relations have become much more complex. The United States' patience might be short now that Turkey has agreed to buy S-400 missile defense systems from Russia despite NATO’s reservations. The US Congress is also unhappy with Ankara because of Turkey's continuing detention of American missionary Andrew Brunson. Even if Trump includes exemptions for Turkey from the secondary sanctions, that may not win the approval of Congress.”

Tastekin continues, “A group in the AKP wants Ankara to revert to the US-Israel axis because of economic threats Turkey is facing, while another group demands ‘resistance’ to the United States. But the prevailing opinion is that this time, the Turkish government may not support Iran.”

Some of this may have to do with the value of their banknotes. “Now both sides must be ready for disappointment regarding their hope of using local currencies in their trade, as both Turkey's lira and Iran's rial weaken against the dollar, and the business world will not find it wise to use them in their transactions,” Tastekin concludes. “Turkey now faces a tough period. Which way its relations go with Iran will depend on the new list of US exemptions and whether Ankara can maintain its supportive attitude toward Tehran.”