Turkey stands to suffer under new US sanctions on Iran

Turkey might have a tough time dealing with pending US penalties against Ankara's trading partner Iran. 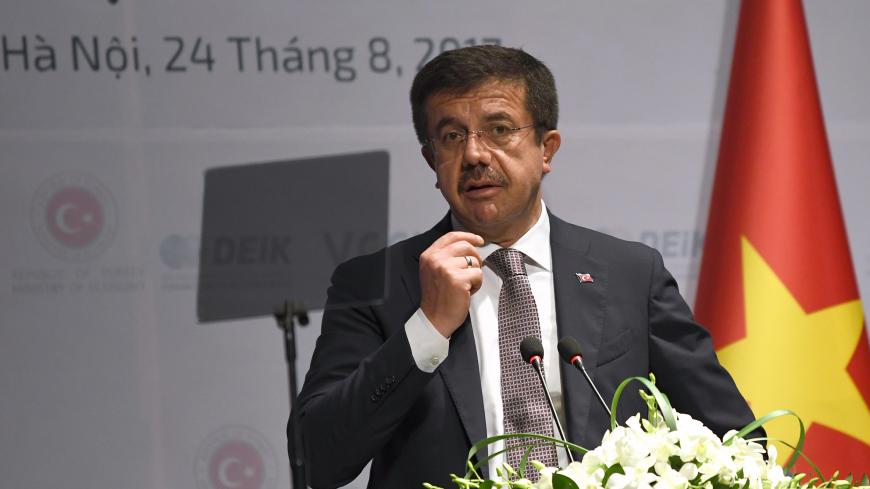 Ankara missed out on many economic opportunities that opened up when the United States lifted sanctions against Iran in 2015. Now Turkey could lose trade with Iran because of impending new sanctions.

Just last month, Turkish Minister of Economy Nihat Zeybekci and a large Turkish delegation that accompanied him to Tehran were talking of the fantastic opportunities offered by the 2015 nuclear agreement signed with Iran by six world powers. Turkey’s Foreign Economic Relations Council, which had invited the Turkish businessmen to the Turkey-Iran Business Council Joint Meeting, was forecasting that if Turkey began taking advantage of the opportunities offered by Iran in the fields of energy, petrochemicals, mining, construction, retail, logistics and tourism, the annual trade volume goal of $30 billion was attainable.

But US President Donald Trump’s decision May 8 to withdraw from the nuclear pact and reinstate sanctions on Iran comes as a major blow to the Turkish business world.

Turkish investments and trade hadn't really had a chance to benefit much yet from the 2015 agreement that lifted sanctions on Iran. The annual trade volume between Turkey and Iran had fallen steadily from 2012 — when it peaked at $22 billion because of Turkey’s gold exports — through 2016. The decline after 2012 could be attributed to sanctions and political tensions linked to Syria and Iraq. Nevertheless, after the Iran sanctions were lifted, its trade volume with Turkey — which was $9.8 billion in 2015 — slipped to $9.7 billion in 2016. Volume didn't exceed $10.7 billion in 2017.

As more than 4,000 foreign trade delegations visited Iran after the sanctions were annulled in 2015, Turkey couldn’t get its share of the pie. Opening the four-floor Turkish Trade Center in Tehran didn't change the dismal picture.

Turkish President Recep Tayyip Erdogan said of the US withdrawal from the nuclear deal: "At the end, the US will be the loser.” Zeybekci announced that Turkey's trade with Iran will continue. In earlier years, Turkey kept trading with Iran by not agreeing to the sanctions and had even profited by becoming the middleman in money transfers to Iran. But this time the situation may develop in a way that hurts Turkey.

This time, US threats against third-country companies trading with Iran will be a major problem for Turkey. In 2012, Ankara slashed oil imports from Iran, replacing them with oil from Iraq and Saudi Arabia. Turkey might try the same approach this time, but that would boost oil prices, which are already trending upward.

Although some analysts think the new sanctions will not affect trading with Iran, some are predicting much tougher days ahead. Turkey — which had taken advantage of some tolerance by the United States earlier — is this time under strict surveillance, accused of breaking the original sanctions via Turkey’s state-owned Halkbank. Major financial fines are expected from the continuing New York trial of businessman Reza Zarrab as well as Hakan Atilla, deputy general manager of Halkbank. Although Turkey is likely to initiate secret bargaining with the United States this time, that might not work and, as Turkish financial columnist Ugur Gurses points out, the United States might impose new restrictions on Turkey once the Halkbank trial ends.

Also, Turkish-American political relations have become much more complex. The United States' patience might be short now that Turkey has agreed to buy S-400 missile defense systems from Russia despite NATO’s reservations. The US Congress is also unhappy with Ankara because of Turkey's continuing detention of American missionary Andrew Brunson. Even if Trump includes exemptions for Turkey from the secondary sanctions, that may not win the approval of Congress.

There are rumors in Ankara's political corridors that Turkey's ruling Justice and Development Party (AKP) is currently conducting secret negotiations with the US administration focusing on the Zarrab court case.

A group in the AKP wants Ankara to revert to the US-Israel axis because of economic threats Turkey is facing, while another group demands "resistance" to the United States. But the prevailing opinion is that this time, the Turkish government may not support Iran.

Economics professor Kenan Mortan said in his assessment for Al-Monitor that Turkey will be seriously pressured by the sanctions, but because of its proximity to Iran may still find ways to bypass sanctions. Ankara could try to devise a commodity exchange system by creating free-trade zones at border crossings. It could resume gold exports to facilitate money transfers to Iran, he noted.

Although oil and natural gas are the main import commodities, there's been a visible increase in Turkish imports of zinc and copper from Iran. Imports of all these commodities could continue despite the sanctions if Turkey is able to exploit gray areas or work under the radar.

A major cause of Turkish companies not getting a foothold in Iran is the exceptionally strong, foundation-owned charitable trusts in Iran known as bonyads, which demand partnership and control in investments. But given the looming US sanctions, Mortan said, the trusts may open new investment fields for Turkish companies. Bonyads are said to control 40% of the economy directly and 45% indirectly.

Trade with local currencies could be given priority, which would allow Turkey to avoid the Society for Worldwide Interbank Financial Telecommunication system. The first Turkish lira-Iranian rial foreign exchange swap was realized April 16.

Mortan notes other negative aspects of the overall picture for Turkey:

Now both sides must be ready for disappointment regarding their hope of using local currencies in their trade, as both Turkey's lira and Iran's rial weaken against the dollar, and the business world will not find it wise to use them in their transactions.

Turkey now faces a tough period. Which way its relations go with Iran will depend on the new list of US exemptions and whether Ankara can maintain its supportive attitude toward Tehran.