The Russian president needs the United States to stabilize Syria, but expects sanctions relief in return. 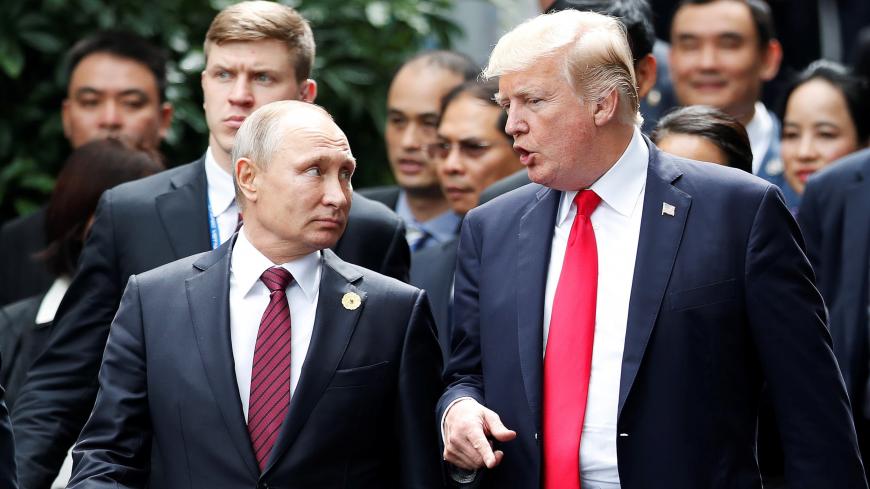 Can US President Donald Trump and Russian President Vladimir Putin come to an accord on Syria? Here, the two presidents talk at the APEC Summit in Danang, Vietnam, Nov. 11, 2017. - REUTERS/Jorge Silva

Russian President Vladimir Putin is banking that he can persuade his US counterpart Donald Trump that Russia offers the best chance to allow US troops to leave Syria “very soon,” as Trump has indicated he would like to do.

Preparations are underway for a US-Russia presidential summit, where Syria will be at the top of the agenda. Putin’s leverage in Syria is unmatched, as he has managed complicated relations with all of the key parties — the Syrian government, Iran, Turkey and Israel — while keeping up regular contacts with Arab Gulf leaders. On June 1, Putin welcomed Mohammed bin Zayed Al Nahyan, the crown prince of Abu Dhabi and deputy supreme commander of the United Arab Emirates' armed forces, to Moscow.

As we wrote here nearly a year ago, in July 2017, Putin “welcomes and needs US partnership in stabilizing Syria, but whose [Putin's] leverage with Damascus, Tehran and Ankara could be weakened, rather than strengthened, by closer ties with the United States.” This may still be the case, but the Russian diplomatic stock has surged since then. In addition to Putin’s relentless personal engagement, backed by military muscle in Syria, the US withdrawal from the Joint Comprehensive Plan of Action (JCPOA) has been a windfall for the Russian president, increasing the value of his good offices for Tehran.

Putin has also begun to deftly capitalize on the friction between the United States and Europe over tariffs and the JCPOA, as we reported here last week in the context of French President Emmanuel Macron's call for “European financial sovereignty” at the St. Petersburg International Economic Forum. Igor Delanoe writes that “by attempting to cautiously build bridges with Russia regarding Syria, Paris wants to show it's not aligned with the United States on all Middle Eastern issues. In that sense, Trump’s decision to walk out on the Iran deal gives France more room when it comes to Syria. Distancing itself from Washington’s regional policy is part of France’s independent stance.”

No doubt Putin has the outlines of a plan. Few outlets besides Al-Monitor picked up on both his call for the withdrawal of “foreign armed forces” from Syria and his tireless mediation and back-channel diplomacy with Jerusalem and Tehran.

A pressing test of Russian diplomacy is defusing Israeli concerns about a potential Syrian operation against armed groups in Daraa because of the presence of Iranian and Iranian-backed militias, including Hezbollah. Maxim Suchkov reports, “Moscow is working to resolve the issue, first by trying to convince the Israelis of Assad’s need for that offensive (similar talks with the Americans are expected soon) and, second, by negotiating terms of the potential departure of the pro-Iranian forces. Both themes are closely linked: Israel discourages the Daraa operation, given the leverage Israel has in the area over Syrian security, and given its fear of losing that leverage should pro-Iranian militias and Hezbollah win the territory from the opposition. If, however, there are guarantees that Iran won’t have a military presence in southern Syria or participate in any military operation by the Syrian army there, Israel might not impede the offensive. … The bottom line here is Russia can’t force Iran out of southern Syria — that can only be done through talks with Tehran and Tehran’s voluntary participation, with clear incentives from Russia and, indirectly, Israel.”

Putin may seek to persuade Trump that the Syrian military would take the charge in forthcoming operations, and that Iran and Hezbollah would stay behind. Osama Al Sharif adds, “With Russia’s assurances that only the Syrian army will be allowed to deploy in southern Syria and reports that Iranian militias have pulled back, it is difficult to see how the US position can be justified. A peaceful deployment should spare Daraa carnage and destruction, which in the long run is in the interest of Jordan, according to [retired Jordanian Brig. Gen. Fayez al-] Duwairi.”

Suchkov concludes, “Despite all the complexities, the situation in southern Syria doesn’t look hopeless at this point. A far bigger challenge in this conundrum is Iran’s long-term presence in the rest of Syria. There’s an understanding in Moscow that Hezbollah may always find a reason to stay in Syria as long as its leadership feels it needs to ensure Lebanon’s security. There’s no way for Russia or any other external power to guarantee an Iran-free Syria, as there are no means of verifying Iran’s presence or its influence.”

Perhaps the most daunting challenge for Putin will be to keep Turkish President Recep Tayyip Erdogan on board with the Astana process. Turkish actions in Idlib appear aimed at solidifying a new Turkish sphere of interest to oppose the Syrian government, rather than being part of a coordinated effort to de-escalate the conflict in advance of military operations to re-establish Syrian sovereignty.

Fehim Tastekin writes, “Turkey recently completed its 12th and last military observation post in Idlib — the northwestern Syrian province that has become a ‘jihadi reserve.’ With that done, and with regime pressure mounting on Idlib, Turkish troops and their rebel allies on May 27 ventured into the adjacent Jabal al-Akrad region in the province of Latakia. … Syrian government forces shelled the mountaintop where the Turkish troops were positioned, and fired an antitank missile at a rebel-operated vehicle, killing five fighters.”

“Under growing pressure from the Syrian army, the region has become a theater of ferocious conflicts between rival armed groups, including assassinations,” Tastekin reports. “Idlib remains a turbulent place, plagued by Syrian army operations, clashes between rival groups and assassinations blamed on the Islamic State. More than 180,000 people, including nearly 29,000 fighters, have been evacuated from eastern Ghouta, eastern Qalamoun and most recently Yarmouk, to Turkish-controlled areas, increasing the fragility of those regions, especially Idlib.”

“Turkey’s action plan rests on keeping the regime away from the region,” Tastekin continues. “In Ankara’s eyes, protecting Idlib might be a trump card in its Syria policy. … Russia and Iran, on the other hand, want to push the groups dominating Idlib to lay down their arms or give up fighting the regime to join the political process.

“The current masters of Idlib have been careful to remain 'friendly' with Turkey because of the direct and indirect assistance they get,” Tastekin writes. “This includes Hayat Tahrir al-Sham, which lives entirely on the Turkish border. Yet the Hayat Tahrir al-Sham agenda leaves no room for compromise. Yousef al-Hajar, a senior Hayat Tahrir al-Sham member, confirmed the group cooperates with Turkey, while vowing to fight on until the regime falls. In an apparent bid to minimize the risk of blowback and to make Idlib useful, Turkey seems to be making some sly interventions. For quite some time, Ankara has sought to merge groups that are close to it into a united army, help them get the upper hand in Idlib and recast them as the opposition element in the political settlement process.”

Tastekin concludes that “much like the situation it faced in Afrin, Turkey owes its current positions in Idlib to coordination with Russia. Any falling out with Russia and Iran could greatly complicate things for Turkey.”

Syrian Deputy Prime Minister, Foreign and Expatriates Minister Walid Moallem said June 2 that his government considers “Turkey to be an enemy and an invader. Neither Turkey nor the United States have the right to negotiate regarding the Syrian cities; we will liberate every inch of our land.”

Turkey’s coordination with Hayat Tahrir al-Sham should be cause for alarm and a worrying reminder of Ankara’s pattern of coordination with jihadi forces in Syria, especially if the United States is considering buying into any Turkish notion of opposition enclaves in northern Syria. On May 31, the US State Department added Hayat Tahrir al-Sham as a terrorist entity linked to Jabhat al-Nusra, the al-Qaeda affiliate in Syria.

Amberin Zaman reports that a Turkish plan for Manbij and surrounding areas, which has some support within the Trump administration, “envisages building anti-regime enclaves across Syria managed by Turkey and the United States, in which the YPG [People’s Protection Units] would be sidelined and Damascus denied access to vital energy, water and agricultural resources. It would also roll back Russian and Iranian influence.”

Putin’s diplomacy to date has been instrumental in preventing an escalation in Syria, but he can only keep it up for so long without an assist from the United States. But the question is whether Trump will buy into Putin’s plan, and at what price. As we wrote in July 2017, “Putin’s endgame is relief from US-led sanctions. If no sanctions relief is forthcoming, Putin will have little interest in carrying Trump’s water at the expense of his regional ties.”