Ankara desperately needs options to get out of the Syria quagmire, but the Turkish president's offer is likely to fall flat with the Biden administration. 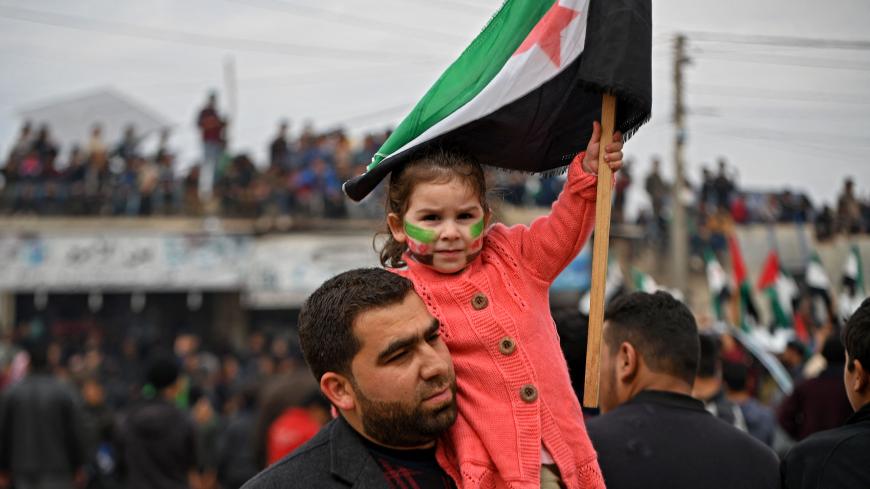 A man holds a girl on his shoulder as she holds a flag of the Syrian opposition during a demonstration in the village of Atme in Syria's rebel-held northwestern province of Idlib close to the border with Turkey on March 15, 2021, as demonstrators mark 10 years since the nationwide anti-government protests that sparked the country's devastating civil war. - RAMI AL SAYED/AFP via Getty Images

This week marked the 10-year anniversary of the Syrian uprising and war. UN Syria Envoy Geir Pedersen commended the resilience of Syrians in facing a decade of “unimaginable violence and indignities,” including as many as 500,000 dead, 5.5 million refugees, 6.7 million internally displaced, chemical weapons attacks, sexual violence against women, torture and other atrocities.

In a sign of such resilience and bravery, Khaled al-Khateb reports from Syria that “opposition-held areas in northwestern Syria celebrated the 10th anniversary of the revolution — originally ignited March 18, 2011, in the southern province of Daraa — in a festive atmosphere. Hundreds of thousands of civilians took to the streets across these parts, affirming from the freedom squares that their journey persists. … The revolution’s banners filled the squares in the cities of Idlib, Azaz, al-Bab, Dana, Jisr al-Shughour and others.”

Turkish President Recep Tayyip Erdogan noted the milestone with an op-ed for Bloomberg suggesting that the West “throw its weight” behind Turkey in Syria, which would be “minimum cost and … maximum impact.”

Turkey’s role in Syria, including Idlib, has been a no-way-out quagmire, revealing irreconcilable differences with Russian President Vladimir Putin. Turkey, Russia, and Iran compose the so-called “Astana Group” (named after the location of their first meeting) on Syria diplomacy. The group has hung together despite a key fault line: Russia and Iran support the Syrian government of Bashar al-Assad, including the Syrian military eventually retaking Idlib and crushing Hayat Tahrir al-Sham and the other armed opposition groups there.

Erdogan’s appeal to the West conveys “an apparent hope to advance plans for a safe zone along the Turkish border and hamper Russia in Idlib, if not to revive his regime-change ambitions,” writes Fehim Tastekin.

Erdogan fears that Idlib may be the last stand for Turkish-backed proxy forces there, and a setback for Turkish influence in the country. Ankara and its Syrian allies have tried to engage and moderate the behavior of Hayat Tahrir al-Sham, which holds most sway in Idlib, as Sultan al-Kanj reports.

Russia has picked up its air campaign around Idlib and against Islamic State strongholds this month, Khaled al-Khateb reports, as Israel reportedly attacked Damascus as part of its episodic air campaign against Iranian and Iranian-backed forces and bases.

Tastekin explains, “Turkey’s intervention in Idlib in February 2020, which claimed the lives of dozens of its soldiers, failed to stop regime forces from taking control of the key M5 highway and besieging Turkish military outposts in the region. … The groups Erdogan calls ‘the opposition’ are the same groups he pledged to eliminate in two deals with Russia in September 2018 and March 2020.”

That said, Turkey’s military presence in Idlib, let alone the so-called safe zones in the northeast, is formidable, and that is at the core of his message to President Joe Biden: If you don’t want to talk or deal with Putin or Assad in Syria, deal with me instead.

“Despite his collaboration with Moscow, Erdogan has played a double game, waging military operations against the Kurds on the one hand, while continuing to shield rebel forces on the other,” writes Tastekin. “By setting up more than 70 military outposts in southern Idlib over the past year, Turkey has effectively erected a barrier to the Syrian army. Erdogan’s offer to the West is a reminder of the value of Turkey’s posture in Syria and a message to Biden — who still keeps him waiting for a phone call — on how the two could reconcile.”

… and with Washington over Kurds

The catch, however, is the same as it ever was for Erdogan: He wants the United States and the West to end support for the People’s Protection Units (the YPG), the Kurdish group that makes up the core of the Syrian Democratic Forces (SDF). The SDF has been the on-the-ground Syrian partner for the successful US-led coalition operations against the Islamic State in Syria.

“We expect the West to adopt a clear position against YPG, the PKK’s Syrian branch, which attacks safe zones and plays into the hands of the regime,” Erdogan wrote, referring to the Kurdistan Workers Party.

Erdogan has been nothing but consistent in equating the YPG with the Islamic State and al-Qaeda as terrorists. While the United States shares the view of the PKK as a terrorist group, there is a major disconnect between Washington and Ankara on the YPG.

Even US President Donald Trump, who greenlighted the Turkish offensive into northern Syria in 2019, didn’t totally bail on the Kurds.

And Erdogan only rubbed a spot on the wall further with Biden this week over the Kurds. The US State Department said the Turkish government’s shutdown of the pro-Kurdish Peoples’ Democratic Party (HDP), the country’s second-largest opposition group in parliament, “would unduly subvert the will of Turkish voters, further undermine democracy in Turkey and deny millions of Turkish citizens their chosen representation,” as Amberin Zaman, Diego Cupolo and Elizabeth Hagedorn report.

Meanwhile, Turkey’s “safe zone” in northeastern Syria risks becoming a permanent military occupation, with regular friction between Turkish and SDF forces, as Mohammad Hardan reports. Turkey’s ultimate objective would be a return of the 3.6 million Syrian refugees in Turkey to Syria — a hardship on a Turkish economy that is suffering massive unemployment, as Mustafa Sonmez writes.

“The Biden administration’s policies on Syria are meanwhile undergoing an interagency review,” writes Elizabeth Hagedorn, “and advocates are hoping the end result will emphasize alleviating the humanitarian catastrophe in Idlib. It could include restoring assistance to northern Syria, where previous President Donald Trump slashed funding for stabilization projects in areas once controlled by the Islamic State.”

Given the seeming irreconcilable differences with Washington and Moscow, Erdogan is also appealing again to Europe for some further diplomatic options. “Erdogan’s recently unveiled human rights package, judicial and economic reforms, and Ankara’s initiatives to reset ties with Egypt and Israel could all be seen as Turkey’s efforts to mend ties with its traditional allies and the EU,” writes Cengiz Candar.

The EU this week reiterated its position that there will be no reconstruction assistance to Syria until there is a political transition.

Ahmed Gomaa explains why Erdogan’s appeal may be limited among Arab states, as Egypt and the UAE have suggested a rethink on Syria’s expulsion from the Arab League.

Hezbollah in Moscow to talk Syria

Meanwhile, Russia received a high-profile Hezbollah delegation to Moscow to talk, in part, about how best to approach Syria.

“Moscow is growing tired of the conflict,” writes Anton Mardasov. “Yet its plan for attaining peace presupposes that Iran and Hezbollah would somehow freeze their activity in the region. … Assad has managed to survive, but he cannot gain control over oil and agricultural resources in the east of the country and solve the problem of economic self-sufficiency. Both these conundrums are hard to resolve without serious compromises.”

Erdogan’s op-ed, on the occasion of Syria’s intolerable 10-year tragedy, has served to reveal the reasons for the enduring stalemate in Syria rather than any creative path to ending the country’s “living nightmare.”

Russia and Iran are fine with stifling the UN-mediated political process to keep Assad in power. Erdogan, however, is desperate for an end to the refugee crisis and a more enduring border security agreement with Syria. Putin has tried several times to rebuild the bridge between Ankara and Damascus, but there’s lots of bad blood to overcome. This division between Russia and Turkey could be an opportunity for the Biden administration to give the UN Syria process a needed boost.