What lies behind Erdogan’s Syria offer to the West?

The Turkish president’s appeal to the West to back Turkey in Syria and make political gains “at minimum cost” comes as a sign he has little intention of giving up his ambitions in Syria. 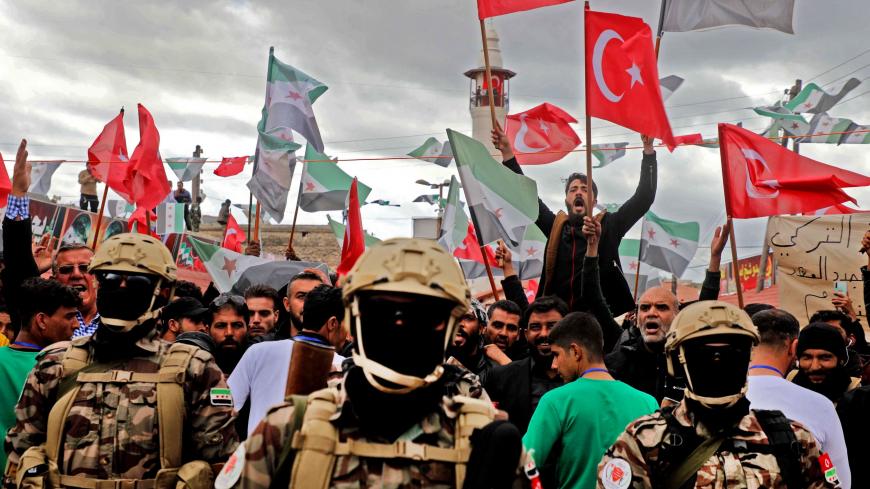 Turkey-backed Syrian fighters and displaced civilians raise flags of the Syrian opposition and the Turkish flag in Afrin, in Aleppo province, on March 17, 2021, as they mark 10 years since the nationwide anti-government protests that sparked the country's devastating civil war. - AAREF WATAD/AFP via Getty Images

As the Syrian crisis enters its 11th year this month, Turkish President Recep Tayyip Erdogan has appealed for Western support in Syria in an apparent hope to advance plans for a safe zone along the Turkish border and hamper Russia in Idlib, if not revive his regime-change ambitions.

In a March 15 article for Bloomberg, Erdogan argues that restoring peace in Syria depends on “strong Western support” for Turkey and that the “most sensible” option for Western leaders is “to throw their weight behind Turkey and become part of the solution in Syria, at minimum cost and with maximum impact.”

Erdogan’s emphasis on “minimum cost” has unpleasant political connotations in Turkey, dating back to the early years of the Cold War, when American leaders would often advocate military partnership with Turkey as a cheap way of advancing US security interests. In remarks to Congress in 1953, for instance, Secretary of State John Foster Dulles argued that Turkish soldiers “get 23 cents a month,” while US soldiers “would cost you 10 times as much.” Such comparisons left lasting marks in Turkey’s political lexicon and the great Turkish poet Nazim Hikmet, an avowed socialist, even penned a poem titled “The 23-cent soldier.” For many, military collaboration with the United States remains akin to “being America’s cheapest soldiers.”

In his article, Erdogan describes Idlib as “the opposition’s final stronghold,” never mind that the province is controlled by Hayat Tahrir al-Sham, which Ankara itself designates as a terrorist group, and other al-Qaeda-inspired factions. He claims Turkey “saved millions of lives” in Idlib a year ago when it struck regime positions to stop attacks on the region. Yet Turkey’s intervention in Idlib in February 2020, which claimed the lives of dozens of its soldiers, failed to stop regime forces from taking control of the key M5 highway and besieging Turkish military outposts in the region. Moreover, the population in the area was hardly in the millions as locals had already fled their homes in droves. More crucially, the groups Erdogan calls “the opposition” are the same groups he pledged to eliminate in two deals with Russia in September 2018 and March 2020.

Erdogan frames the Syrian conflict as the “terrible outcomes, including terrorism and irregular migration,” of the regime’s crackdown on popular demands for freedom and democracy, obscuring Ankara’s role in militarizing the conflict through weapons transfers to the rebels — with CIA help in the early years of the conflict — and loose border control that allowed foreign jihadis to cross to Syria. While stressing the need to preserve Syria’s unity, Erdogan seems to insist on a regime change, writing, “The Turkish people believe that creating a political system, capable of representing all Syrians, is key to restoring peace and stability. We reject any plan that does not address the Syrian people’s demand for human dignity.”

Erdogan boasts that Turkey “was the first country to deploy combat troops against terrorist groups in Syria,” even though he had gloated at the Islamic State’s (IS) onslaught on Kurdish areas along the border in 2014. US raids against IS began in September that year, while Turkey launched its first military campaign, Operation Euphrates Shield, in 2016 to stop the advances of the Kurdish People’s Protection Units (YPG) after their ouster of IS from northern Aleppo. The operation, which also was aimed against IS, was certainly instrumental also in dispelling criticism that Turkey was supporting the militant group.

The areas that Turkey and its Syrian rebels allies have come to control through Operation Euphrates Shield and two ensuing operations, Olive Branch and Peace Spring, have seen clashes between Turkish-backed groups, moves to alter demographics at the expense of the Kurds and myriad violations such as looting, extortion and the destruction of religious and historical sites. Erdogan, however, paints a rosy picture, writing, “The safe zones, which Turkey created in cooperation with its local partners … have become islands of peace and stability, as well as self-sustaining ecosystems.” He refers also to a large-scale housing construction plan in northern Syria to settle up to 2 million refugees, which he had raised at the UN in 2019. According to Erdogan, Turkey’s actions have “sheltered Europe from irregular migration and terrorism, and secured NATO’s southeastern border.”

Erdogan’s offer to the West is not without conditions. Ankara, he writes, expects the West to “adopt a clear position against the YPG” and support “the legitimate Syrian opposition.” He warns that failure to share Turkey’s burden may result in fresh refugee waves to Europe. The warning evokes the crisis in February 2020, when Erdogan encouraged refugees in Turkey to cross to Europe via Greece. He now wants the West to invest in the “safe zones” in Syria and “unequivocally endorse this peace project.”

Finally, Erdogan appeals to the Joe Biden administration to “stay true to its campaign pledges and work with us to end the tragedy in Syria and to defend democracy.”

Less than two years ago, Erdogan was hailing the Astana process between Turkey, Russia and Iran as “the sole initiative capable of producing effective solutions” in Syria. And earlier this month, Turkey launched a new peace track with Russia and Qatar. Yet Erdogan’s Bloomberg article shows he still entertains the ambitions he had before his rapprochement with Moscow in 2016.

Despite his collaboration with Moscow, Erdogan has played a double game, waging military operations against the Kurds on the one hand while continuing to shield rebel forces on the other. By setting up more than 70 military outposts in southern Idlib over the past year, Turkey has effectively erected a barrier to the Syrian army. Erdogan’s offer to the West is a reminder of the value of Turkey’s posture in Syria and a message to Biden — who still keeps him waiting for a phone call — on how the two could reconcile.

Yet the offer, in its current form, could hardly resonate with its addressees, who have harshly criticized Turkey’s actions in Syria. Just last week, a European Parliament resolution denounced Turkey’s “illegal invasion” in Syria and praised the Kurdish-led Syrian Democratic Forces as an “ally” against IS.

Arab states, which have collaborated with the West in Syria, are unlikely to be impressed either, as they have come to see Turkey’s influence expansion as a threat. Some are already pressing for Syria’s return to the Arab League to counter Turkish and Iranian influence in the region.

Erdogan’s condition to the West to renounce the YPG is, in fact, self-destructive to his offer. Biden has displayed little flexibility on the issue and even the Donald Trump administration, which was ready to abandon the Kurds in 2019, had to step back under pressure from Congress.

More importantly, Erdogan’s offer bumps into Russia, which remains a steadfast ally of Bashar al-Assad’s government. And any move to create a safe zone along Turkey’s border depends on Russia’s approval. As if responding to Erdogan’s intended pivot to the West, the Russians have recently hit oil facilities used by Turkish-backed rebel forces.

Erdogan’s appeal to the West might stem from a sense of urgency. By failing to fulfill his commitments in Idlib, he has been paving the way for a fresh Syrian-Russian thrust on the region. An escalation in the next couple of months would not come as a surprise. Erdogan might be trying to deter such a prospect, while offering Biden a ground for score-settling with Russia.