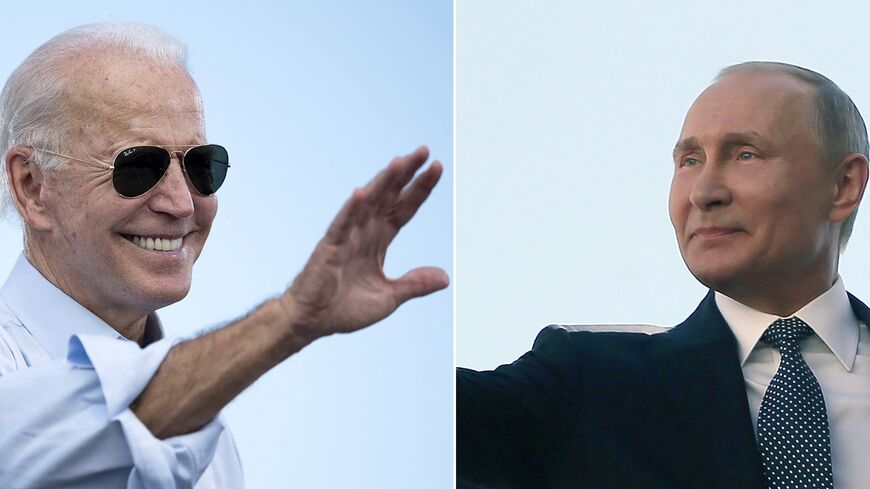 This combination of file pictures created by Getty Images on June 4, 2021, shows then US Vice President Joe Biden (L) at a drive-in event in Coconut Creek, Florida, on Oct. 29, 2020, and Russian President Vladimir Putin following his inauguration ceremony at the Kremlin in Moscow on May 7, 2018. The pair are to meet June 16 in Geneva. - JIM WATSON/AFP / YEKATERINA SHTUKINA/SPUTNIK/Pool/AFP via Getty Images

US ramps up for showdown with Russia over humanitarian corridor

In July 2018, when US President Donald Trump met with Russian President Vladimir Putin in Helsinki, Putin did most of the talking. Much of it was about Syria.

It was clear, Trump told his national security adviser John Bolton after an almost two-hour one-on-one session with his Russian counterpart with only translators present, that Putin "wants out" of Syria, as Bolton recounts in his memoir, "The Room Where it Happened."

When Biden meets Putin in Geneva on June 15, Syria again is likely to be on the agenda, if perhaps not to the extent of the Trump-Putin meeting. It will get slotted in among issues such as cyberattacks on US infrastructure, human rights, the Russian military buildup in Ukraine, US sanctions on Russia and even the fate of talks over an Iran nuclear deal.

But if Biden does raise Syria with Putin, he will likely start with seeking the reauthorization of the Bab al-Hawa border crossing, on the Turkish-Syrian border, currently the only access point for UN-supervised international aid and assistance.

The UN Security Council mandate for the crossing expires July 10, and Russia, which abstained on the vote on the crossing last year, may want something in return for allowing the passage to be reauthorized. Already, the United States is ramping up for a Security Council showdown, making clear that Bab al-Hawa is a US priority.

A State Department readout of US Secretary of State Antony Blinken’s May 19 meeting in Iceland with Russian Foreign Minister Sergey Lavrov said Blinken "underscored the imperative of ensuring humanitarian access for the people of Syria."

Linda Thomas-Greenfield, the US ambassador to the United Nations, on June 3 announced $240 million in additional humanitarian assistance for Syria, during a visit to the crossing.

Thomas-Greenfield’s visit comes less than three weeks after the acting assistant secretary of state for Near East affairs, Joey Hood, led a US delegation into northeast Syria. A State Department readout said Hood stressed the US commitment to cooperation and coordination in the coalition to defeat the Islamic State, support for efforts seeking a political resolution to the Syrian conflict and resolve "to ensure the reauthorization of cross-border assistance into Syria."

Russia’s position has been that all aid and assistance should flow through the Syrian government, not areas controlled by opposition forces, and that the West needs to do more to address the role of terrorists in Idlib province in northwest Syria.

Idlib is the last territorial holdout against the Syrian government. The province is mostly controlled by al-Qaeda offshoot Hayat Tahrir al-Sham (or "Levant Liberation Committee"), which the United States, Russia and the Security Council have designated a terrorist group.

Hayat Tahrir al-Sham is feeling the heat, anxious about a potential Russian-backed Syrian assault, while dealing with dissident radical armed groups and growing frustration by people tired of living under Hayat Tahrir al-Sham’s brutal and arbitrary Islamic law. Sultan al-Kanj reports from Idlib that Hayat Tahrir al-Sham has launched a massive arrest campaign against Assad supporters, but it’s clearly more than that.

At a Security Council briefing on Syria on May 26, Russia's first deputy permanent representative, Dmitry Polyanskiy, laid out Moscow’s concerns: "The West makes it clear that they are not going to take any steps to spell trouble on terrorists rooted in Idlib. They picture the CBM [cross-border mechanism, or border crossing] as the only possible solution to Idlib’s humanitarian problems. We can’t support this hypocritical position. Of course, we will have to take this into account when making a decision regarding the renewal of the CBM."

Moscow further claims that the reelection of Syrian President Bashar al-Assad conveys the increasing stability and legitimacy of the Syrian government. The United States called the elections a "sham." UN Syria Envoy Geir Pedersen, briefing the Security Council on May 26, said that "the UN is not involved in this election."

Meanwhile, as Mohammad Hardan reports, Russia is building an expansion of Syria’s Khmeimim air base in Latakia as part of its plans to strengthen its position in Syria and the eastern Mediterranean.

Russia also regularly stresses the need for the 5.6 million Syrian refugees and 6.7 million internally displaced Syrians to return to their homes, a process that is deeply complicated and risky given the dire political, security and economic conditions in Syria.

Khaled al-Khateb reports from Syria that "hundreds of displaced Syrians have returned to their villages in the Lajal region of Daraa province, under the auspices of the Russian forces that mediated with the Syrian government for the return of the displaced to their areas of control."

Erdogan also has his issues with US Syria policy

Syria is a multifaceted problem. The Biden administration remains committed to its partnership with the primarily Kurdish Syrian Democratic Forces (SDF), whose political arm controls parts of northeast Syria to combat the Islamic State.

Neighboring Turkey and its president, Recep Tayyip Erdogan, consider the Syrian Kurdish groups affiliated with the SDF as inseparable from the Kurdistan Workers Party (PKK), which it considers a terrorist group, and more of a security threat than even the Islamic State or al-Qaeda.

Russia, meantime, rejects the US-backed semi-autonomous region as undermining Syrian sovereignty. A Russian Foreign Ministry spokesperson said May 26, "The Pentagon’s attempts to illegally gain a foothold in Syria under the pretext of fighting terrorism will not help stabilize the region. The Americans are pursuing entirely different goals there, including those linked with hydrocarbon deposits to the north of the Euphrates."

Amberin Zaman broke the story that the Biden administration would not renew a waiver given last year to a US company, Delta Crescent Energy, to produce and sell oil in the Syrian Kurdish region.

Turkey’s differences with its NATO ally the United States play into Ankara's anxiety about the Kurds, a minority population across the region. The Delta Crescent Energy deal "deepened Turkish paranoia that … the United State may be midwifing a Kurdish state that would seek to incorporate large chunks of Turkey’s Kurdish-majority southeast," Zaman writes. "Those suspicions have been amplified by the fact that the SDF and the Syrian Democratic Council are led by individuals who were formerly part of the PKK militia that is fighting Turkey."

When Biden meets with Erdogan in Brussels on June 14, on the sidelines of the NATO summit, Erdogan, for one, will have Syria at the top of his agenda.

In a meeting with US Deputy Secretary of State Wendy Sherman in Ankara on May 29, Turkish presidential spokesperson Ibrahim Kalin conveyed Turkey’s "expectations about PYD [the Syrian Kurdish Democratic Union Party, linked with the SDF] and FETO" (the Gulen group Erdogan has accused of an attempted coup in 2016, and whose leader, Fethullah Gulen, resides in the United States) in a preparatory discussion for the Biden-Turkey meeting.

Metin Gurcan has the analysis here on the stakes of the summit for Erdogan, who, Gurcan writes, "is bracing for a make-or-break meeting," adding that "Erdogan remains squeezed between an imposing need for a thaw in his fraught ties with Washington and the task of selling it to his fold at home, where anti-American sentiment is running high, not least because he has often fueled it himself."

"It is a tragic irony that this time of relative calm, compared with earlier years of the conflict, is also a period of immense and growing humanitarian suffering of the Syrian people," Pedersen told the Security Council last month.

With the political process stymied, and the humanitarian and health situation "dire," and even a possible bread shortage, as Khaled al-Khateb reports from Aleppo, “There are great dangers in not seizing the opportunity that the current period affords us,” Pedersen said. “Syria needs serious attention so that we can build on this dynamic."

He had said in January, “We can’t continue like this.” He might not have said it again this time, but he could have.