The US administration might be open to a position shift on the Syrian file to secure the flow of cross-border international aid to Syria, a prospect that may spoil Turkey's calculations in Syria and particularly in Idlib. 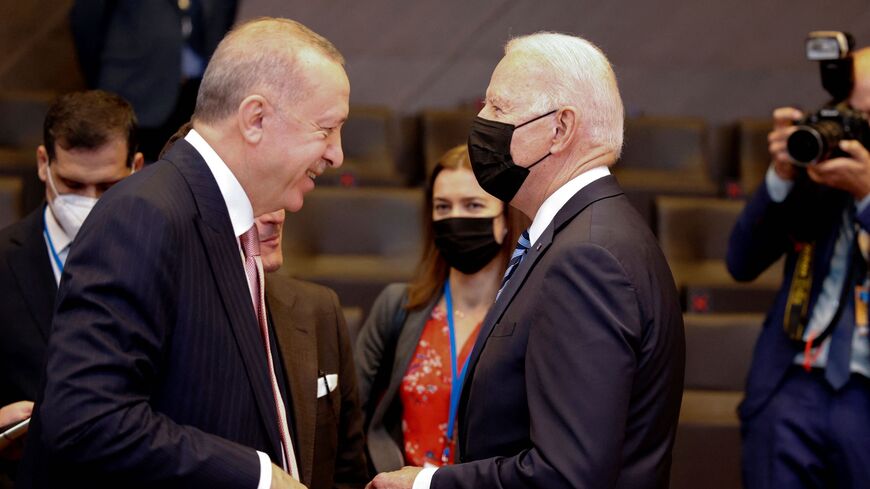 US President Joe Biden (R) speaks with Turkey's President Recep Tayyip Erdogan (L) during a plenary session of a summit at the North Atlantic Treaty Organization headquarters in Brussels, on June 14, 2021. - OLIVIER MATTHYS/AFP via Getty Images

Although humanitarian aid to Syria was hardly a top agenda item during President Joe Biden’s Europe tour, Washington has signaled that it might be ready for some sort of position shift over the matter, which remains a top priority for the Biden administration's Syria policy. As Washington’s talks with Moscow have been focusing on keeping the international aid flowing and reopening border crossings, Turkey holds a key position in the negotiations.

Although Biden has failed to secure a commitment from Russian President Vladimir Putin to renew cross-border humanitarian access to Syria during their June 16 meeting, remarks indicate both leaders might be ready for a change.

“[Putin] indicated that he was prepared to, quote, ‘help’ on Afghanistan … on Iran,” Biden said following the June 16 meeting. “In return, we told him what we wanted to do relative to bringing some stability and economic security or physical security to the people of Syria and Libya,” he added.

Currently, the most pressing issue in the negotiations is keeping the Cilvegozu/Bab al-Hawa crossing on the Turkish border open. A UN Security Council mandate to keep the crossing open will end by July 10, amid warnings by civic groups of a looming catastrophe. The Biden administration and international organizations are also pushing for authorization to reopen the Bab al-Salama crossing on the Turkish border and al-Yarubiyah between Iraqi Kurdistan and northeast Syria.

Turkey, which has a critical position in the decision-making process over which crossings will be used for the flow of humanitarian aid, also stands as the main interlocutor in a possible Russian-American reconciliation.

During his meeting with Biden on June 14 on the sidelines of the NATO summit, Turkey’s President Recep Tayyip Erdogan listed Turkey’s priorities on the Syrian file, reiterating that an end to US support to Syrian Kurdish groups remains Ankara's top priority.

Turkey opposes reopening al-Yarubiyah on the grounds that the aid flowing through the crossing will help the Kurdish-led administration in northeast Syria.

Although Erdogan failed to get what he wanted from Biden during their meeting, the final communique of the NATO summit has offered some mollification for Turkey.

“We remain vigilant over missile launches from Syria which could again hit or target Turkey. We continue to monitor and assess the ballistic missile threat from Syria,” the final document said.

“We reiterate our appreciation to our Ally Turkey for hosting millions of Syrian refugees,” it added. Of note, this support could be seen as a reward for Ankara’s proposal of maintaining the security of Kabul’s airport after NATO forces withdraw from Afghanistan and Turkey's contributions to NATO efforts aiming to deter Russia. There was no mention of Turkey's security concerns in the previous NATO summit communique.
If the Biden administration manages to keep the Bab al-Hawa crossing open and reopen one more crossing for the flow of aid, a milestone could be achieved in Syrian politics.

Speaking in a virtual Security Council session on Syria on March 29, US Secretary of State Antony Blinken urged the reopening of Bab al-Salama and al-Yarubiyah as international organizations warn of a humanitarian disaster on the way if the parties fail to reach an agreement to extend the UN mandate to keep Bab al-Hawa open.

“For millions of civilians in Idlib, this is their lifeline. Over the last year and a half, some members of the Security Council succeeded in shamefully closing two other crossings into Syria. … Bab al-Hawa is literally all that’s left,” US Ambassador to the United Nations Linda Thomas-Greenfield said during her visit to the border crossing on June 3. Her visit came following the Russian threats to veto an extension to keep the border open.

Although Biden failed to secure a promise from Putin to keep the aid flowing during their meeting, the US side “made clear that this was of significant importance for us if there was going to be any further cooperation on Syria,” a US official told Reuters after their June 16 meeting. The official said the renewal will be a test of whether the United States and Russia could work together.

As for the reopening of the al-Yarubiyah crossing, the Russian objections are not the sole obstacle. Turkey also opposes the idea on the grounds that the aid flowing through the crossing will help the Kurdish-led administration in northeast Syria.

Instead, Turkey wants Bab al-Hawa to remain open and to reopen Bab al-Salama, which connects to the Euphrates Shield area under the control of the Turkey-backed Syrian opposition.

Russia, for its part, might consent to Bab al-Hawa remaining open for the sake of Russian-Turkish ties. Yet in exchange for the reopening of Bab al-Salama and al-Yarubiyah, Moscow asks for protective positions toward radical Islamist organizations in Idlib including Hayat Tahrir al-Sham to be abandoned and sanctions on the Syrian regime to be lifted.

Meanwhile, Russia might be seeking a new formula that will push the Kurds in northeast Syria to Damascus. One scenario suggests that should the United States leave control of oil wells in northern Syria to Damascus, then Moscow might allow the reopening of al-Yarubiyah. Although there is no concrete confirmation of such claims, recent developments have strengthened the prospect.

First, the US administration decided to not extend a sanctions waiver granted by the Trump administration in April 2020 to American oil company Delta Crescent Energy’s operations in northeast Syria. Biden might be seeking to pave the way to work with Russia on Syria by abandoning the US policy of guarding the Syrian oil, one he did not cherish in the first place. The move might also aim to smooth Ankara’s concerns over Kurdish control of Syrian oil and Turkish opposition to the reopening of al-Yarubiyah.

After oil wells fell under the control of the SDF, the Moscow and Damascus positions toward the Kurds dramatically changed. The US-Kurdish partnership and the Kurdish dominance over Syrian oil and grain stand as major impediments to the negotiations with Damascus. The reopening of al-Yarubiyah and the change of control over Syrian oil might be a milestone for the Turkey-Russia-US triangle in Syria.

Although the US administration still argues that a political settlement in Syria should be reached in line with Security Council Resolution 2254, which calls for free and fair elections under UN supervision, the Biden-Putin summit might have also hinted at a policy shift in Washington’s standing vis-a-vis the Syrian government.

“They asked me why I thought that it was important to continue to have problems with the president of Syria. I said, ‘Because he’s in violation of an international norm.’ It’s called a chemical weapons treaty. Can’t be trusted. It’s about trust,” Biden said.

These remarks might indicate that Washington’s conditions to set up ties with Syrian President Bashar al Assad have changed. Still, it’s too early to draw big conclusions.

As for Turkey, whether the relative support NATO extended to Ankara in the summit’s final document will translate into concrete assistance or not remains an open question. Biden has not ruled out working with Russia on the Iran, Afghanistan, Libya and Syria files, which means American fulfillment of Turkey’s expectations in Syria is not guaranteed.

Meanwhile, Ankara has taken several steps from Georgia to Ukraine and Poland in a bid to contribute to Western efforts to deter Russia. The tensions piled up between Turkey and Russia on these fronts might turn into an escalation in Idlib, where Damascus and Moscow are already turning up the pressure militarily. Iran is also making a military buildup around Aleppo.

NATO’s support of Turkey might be aiming to build deterrence against an impending storm in Idlib. Yet Ankara is lacking concrete assurance on the matter, as evidenced in Erdogan's remarks after his meeting with Biden.

“I believe we can take care of ourselves. There is no other way to do this,” Erdogan said after the talks, expressing his disappointment over US support to the Syrian Kurdish groups.