After meeting with Putin, Turkish President Recep Tayyip Erdogan slams US (again), but ties between Turkey and Russia have their own strains and limits. 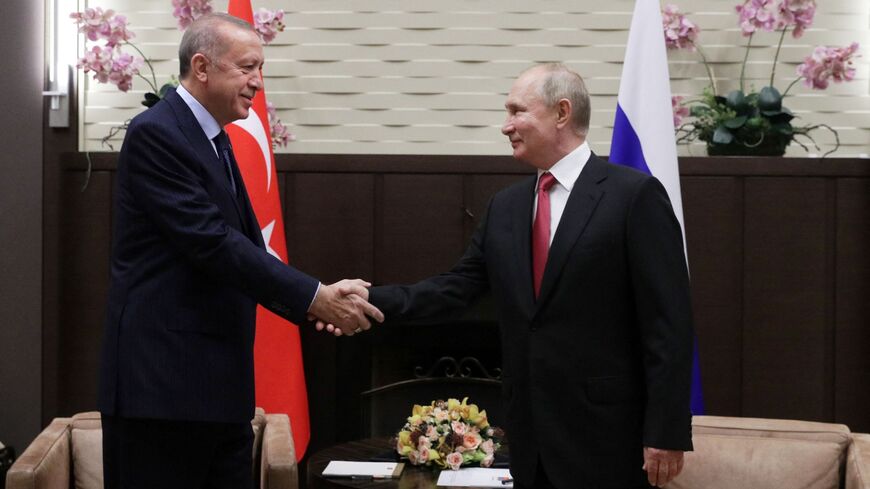 The obligatory references to the US and Turkey as NATO "allies" and "partners" increasingly fall flat, as bilateral relations may be approaching the breaking point over differences on Russia and Syria.

Turkish President Recep Tayyip Erdogan, who met on Sept. 29 with his Russian counterpart Vladimir Putin, said that Turkey is not only going ahead with the purchase of the Russian S-400 missile defense system, which has led to US sanctions, but is considering deeper defense cooperation with Russia, including development of aircraft engines, ship building and warplanes, as we report here.

As for Turkey’s role in the US F-35 fighter jet program, which cost Turkey a reported $1.4 billion, Erdogan adopted a take it or leave it stance on Sept. 30, saying "either they will give us our planes or they will give us the money."

Erdogan’s meeting with Putin followed what Erdogan perceived as a snub from US President Joe Biden during the UN General Assembly meetings in New York last month.

No matter that Biden did not even spend the night in New York, and met with very few world leaders. Many heads of state and government gave their speeches virtually this year.

Erdogan would have settled for a photo op and some forced or false bonhomie with Biden, especially for at least the illusion of leverage or balance ahead of a meeting with Putin on some prickly issues, including Ukraine and Syria (see below).

“It is my hope that, as two NATO countries, we should treat each other with friendship, not hostility,” Erdogan said in New York. "But the current trajectory does not bode well. The point we have reached in our relations with the United States is not good. … I cannot say things have gotten off to a good start with Biden.”

"In terms of Erdogan's image within Turkey, his New York performance seemingly failed to create much impact, neither positively nor negatively," writes Cengiz Candar.

Erdogan’s meeting with Putin, following the flop at the UN, may have reinforced a further tilt east in Turkey’s foreign policy.

"Under Erdogan, Turkey is steadily sailing toward a non-Western trajectory in a multipolar world where China is emerging in its East," adds Candar. "Erdogan’s cautious tone in regard to the Uyghur issue during his UN speech also reflected his efforts not to attract any outrage from Beijing. When it came to targeting the United States and the Western world, meanwhile, Erdogan didn’t mince his words."

"Negotiations with Turkey are sometimes difficult, but we have always left Sochi with a positive outcome," said Putin ahead of the Sochi summit. "We learn how to reconcile."

But Erdogan’s position on Ukraine has so far proven difficult for Putin to reconcile.

"Turkey’s drone sales to Ukraine and Erdogan’s pledge to never recognize the Russian annexation of Crimea have been duly noted by the Russian side, which considers both issues critical to its national security and territorial integrity," Fehim Tastekin writes.

"Erdogan reiterated his Crimea pledge during his address to the UN General Assembly after the Turkish Foreign Ministry declared that the Duma elections held in Crimea this month have 'no validity for Turkey,'" adds Tastekin. "Moreover, Ukrainian Foreign Minister Dmytro Kuleba said that Ukraine was planning to set up a drone plant for the joint production of Turkish-made TB2 drones."

"Had Ankara been able to restrain its reaction to Moscow over the issue," concludes Tastekin, "Turkey could have used the Russian annexation of Crimea as leverage in its negotiations with Russia. Instead, it has maintained its zero-sum position, drawing the wrath of Moscow."

… while keeping up the pressure on Turkey in Syria

Putin is probing whether the time is right for a Syrian military assault on Idlib, the likely last stand of jihadist and Turkish-backed groups opposed to Syrian President Bashar al-Assad.

"Russian air force jets have been pounding rebel positions in and around Idlib, widening their assault to Turkish-occupied zones in the mainly Kurdish enclave of Afrin and near Tell Tamir in the so-called 'Peace Spring Zone' occupied by Turkey in its latest cross-border offensive against the US-backed and Kurdish-led Syrian Democratic Forces in October 2019," reports Amberin Zaman.

Putin may be encouraged by the US withdrawal from Afghanistan as a sign that Washington is stepping back from "endless wars," as US-Russian diplomatic contacts on Syria have picked up, as Vivian Salama discussed in a recent Al-Monitor podcast.

Putin had met with Assad on Sept. 13, two weeks before his meeting with Erdogan. Assad would like to press ahead in Idlib, but Putin is a more careful and deliberate player, seeking greater certainty about how it would play out in Ankara and Washington.

Idlib is controlled by the former al-Qaeda-linked Hayat Tahrir al-Sham ("Liberation of the Levant," or HTS). According to its agreement with Russia, Turkey is tasked with reducing the influence of jihadists. HTS has been pursuing a makeover from its earlier image, and "is refusing calls from al-Qaeda-affiliated Hurras al-Din (Guardians of Religion Organization) to resolve their differences through Sharia arbitration," Khaled Al-Khateb reports from Aleppo.

A US drone strike killed an al-Qaeda leader in Idlib last week.

From Russia’s perspective, Turkey is failing in its stated mission to clean up Idlib.  From Turkey’s perspective, a Russian-backed Syrian assault on Idlib would compound its Syrian refugee crisis.

"Turkey’s main worry is that any full-scale offensive on Idlib will drive up to a million Syrians toward the Turkish border," writes Zaman.

For Erdogan, the endless war in Syria has become a liability in Turkish domestic politics.

"Resentment is soaring toward the estimated 3.7 million Syrian refugees currently in Turkey, and those feelings are being cynically exploited by the opposition in the run-up to presidential and parliamentary elections that are slated to take place in 2023," Zaman writes " … With his poll numbers slipping to unprecedented lows, Erdogan is therefore anxious to preserve the status quo in Idlib, at least until then."

Pinar Tremblay has the take here on the upcoming elections, noting that "opposition parties, such as Republican People’s Party (CHP) have capitalized on the anti-immigrant and anti-refugee sentiment and growing security vulnerability."

"Turkey has recently suspended the issuance of the temporary protection ID card — known as Kimlik — for Syrian refugees who need lifesaving treatment inside Turkish territories, replacing it with a medical tourism document," Sultan Al-Kanj from Idlib.

Putin is also wary that a Russian-backed Syrian assault on Idlib could be a tripwire for a Turkish offensive against the US-backed Syrian Democratic Forces (SDF) in the Autonomous Administration of Northeast Syria (AANES), writes Kirill Semenov.

Turkey considers the People’s Protection Units (YPG), the Syrian Kurdish armed groups which make up the bulk of the SDF, as terrorists linked to the Kurdistan Workers Party (PKK).

US and Turkish differences on the SDF have proven irreconcilable and bitter.

On Sept. 29, Erdogan referred to Brett McGurk, the US National Security Council coordinator for the Middle East and North Africa, as "actually supporting terrorism … he is a director for the PKK and the YPG."

Putin senses an opening to pursue his long-standing plan to engineer an agreement between the Syrian Kurds and Damascus that would be acceptable to Ankara — a revision of 1998 Adana agreement, which defused Turkish-Syrian tensions over the PKK.

Russia, writes Semenov, "is trying to push the Syrian Kurds into a dialogue with Damascus, but without US input. The implication is that the Syrian Kurds themselves must begin to distance themselves from the United States’ in case the US steps back in Syria, as it did in Afghanistan."

Neither Biden, Putin, nor Erdogan seem ready to upend the current status quo without a further signal on what comes next, a kind of fragile stalemate that could break down at any time.

Erdogan can’t ditch the United States completely, as he and Putin are not on the same page in Syria and Ukraine. He needs at least the illusion of an option in dealing with Putin to stay in the game. This is also a trump card for the United States. The frustration for the Turkish president is that his foreign policy is personal and summit level, as Gurcan writes. He and Putin meet and talk often. Erdogan and Biden, in contrast, don’t even try to fake it these days.

In addition to this "horrific death toll," referring to at least 350,000 documented Syrian deaths in the civil war, UN Syria Envoy Geir Pedersen reported to the Security Council this week, "we may add other measures of deep suffering from more than a decade of conflict. More than 12 million Syrians are displaced — that’s half of Syria’s pre-conflict population. Tens of thousands remain detained, abducted or missing. Poverty levels are approaching 90 percent after a decade of conflict, mismanagement and corruption, and now the impact of the Lebanese economic collapse, COVID and, indeed, sanctions. Syria is divided into several de facto zones, with international players jostling in the theater, as well as violent episodes that continue to test the relative calm of the last 18 months."