Idlib could be trump card or time bomb for Turkey

Turkey may be pushing its luck by expanding its operational field into Latakia province, provoking skirmishes with the Syrian army. 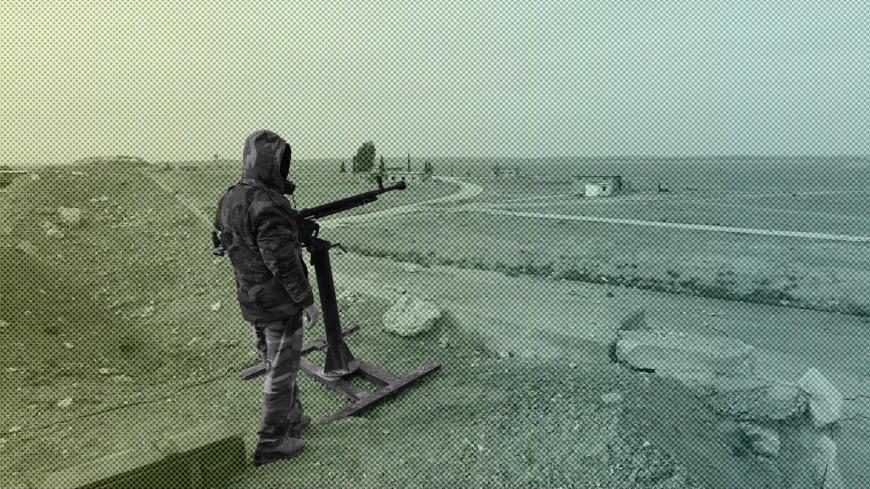 A Syrian army soldier stands next to a military weapon in Idlib, Syria, Jan. 21, 2018. - SANA/REUTERS

Dangerous confrontations are cropping up between Turkish troops and those of the Syrian regime.

As part of an agreement involving the ongoing Syrian peace talks in Astana, Kazakhstan, Turkey recently completed its 12th and last military observation post in Idlib — the northwestern Syrian province that has become a “jihadi reserve.” With that done, and with regime pressure mounting on Idlib, Turkish troops and their rebel allies on May 27 ventured into the adjacent Jabal al-Akrad region in the province of Latakia.

Syrian government forces shelled the mountaintop where the Turkish troops were positioned, and fired an antitank missile at a rebel-operated vehicle, killing five fighters. Reports said the Syrian army used missiles and artillery fire, trying to force the Turkish troops out of the region. On May 31, Al-Masdar news reported that Turkey has established an unauthorized observation post in Latakia, which Syria says violates the Astana agreement. Regime forces have responded by repeatedly shelling the region.

Several days earlier, the Turkish army sent fresh equipment to the region between southeastern Idlib and northern Hama. A convoy of some 100 vehicles headed toward three points in the Morek, Sarman and Jabal Shahshabu areas, reportedly escorted by Faylaq al-Sham, a rebel group linked to the Muslim Brotherhood.

Since October, Turkey has established the 12 observation posts in Idlib to form de-escalation zones, and has deployed about 1,300 soldiers to the area. According to the Russian Defense Ministry’s May 23 press briefing, Russia has set up 10 observation posts in other areas and Iran has set up seven. The three countries are the guarantors of the Astana process.

What the partners aim to achieve remains unclear. The Turkish military's moves are widely interpreted as a mission to shield rebel groups from the Syrian army, which, for its part, appears relatively unperturbed in pursuing its agenda. Just as the tense episode in Latakia began unfolding, regime helicopters were dropping leaflets in Idlib, calling on militants to lay down arms. “Decide your destiny, what are you waiting for, gunman? … You no longer have a solution except for laying down arms or inevitable death. Take advantage of the last chance and hurry to drop your weapon,” the leaflets read. Other leaflets addressed the public, urging support for the Syrian army “to bring back the smile to the faces of our children.”

This seemed to be the harbinger of a large-scale offensive, while air operations continued in the meantime. On May 27, for instance, the regime struck the Idlib towns of Bdama and al-Najiyeh.

The flare-up in Latakia aside, Idlib’s outer periphery looks relatively quiet thanks to the de-escalation zones, yet its inner parts are simmering. Under growing pressure from the Syrian army, the region has become a theater of ferocious conflicts between rival armed groups, including assassinations. According to the Syrian Observatory for Human Rights, 31 civilians and 88 fighters have perished in armed attacks and bombings since April. Among the dead militants were members of groups such as Hayat Tahrir al-Sham, Faylaq al-Sham and Ahrar al-Sham, as well as foreigners such as Uzbeks, Uighurs and Chechens. The death toll from clashes between Hayat Tahrir al-Sham and Turkish-backed groups is even higher — 405 people since Feb. 20, including 231 Hayat Tahrir al-Sham members and 174 fighters from rival groups such as Ahrar al-Sham, the Nureddin Zengi Brigade and Suqour al-Sham.

In sum, Idlib remains a turbulent place, plagued by Syrian army operations, clashes between rival groups, and assassinations blamed on the Islamic State. More than 180,000 people, including nearly 29,000 fighters, have been evacuated from eastern Ghouta, eastern Qalamoun and most recently Yarmouk, to Turkish-controlled areas, increasing the fragility of those regions, especially Idlib.

So, what is Turkey’s strategy in the midst of all this? What does it hope to achieve by increasing its military presence?

Essentially, Turkey’s action plan rests on keeping the regime away from the region. In Ankara’s eyes, protecting Idlib might be a trump card in its Syria policy. Yet how useful a lever could Idlib be, as the region lacks stability and internal unity and has yet to be rid of groups the United Nations lists as terrorist? Could it amount to anything more than a time bomb that could easily blow up on Turkey?

Russia and Iran, on the other hand, want to push the groups dominating Idlib to lay down their arms or give up fighting the regime to join the political process.

So will Turkey contribute to the agenda of its Astana partners, or will it evolve into a shield, heading off potential operations against opposition forces? The first scenario pits Turkey against armed groups bent on fighting the regime, while the second puts it up against the Syrian army and its allies.

In an apparent bid to minimize the risk of blowback and to make Idlib useful, Turkey seems to be making some sly interventions. For quite some time, Ankara has sought to merge groups that are close to it into a united army, help them get the upper hand in Idlib and recast them as the opposition element in the political settlement process. Several weeks ago, Faylaq al-Sham, Suqour al-Sham, the Free Idlib Army, Jaish al-Naser and Jaish al-Ahrar announced they had merged to form the National Liberation Front. In February, the Nureddin Zengi Brigade and Ahrar al-Sham formed the Syrian Liberation Front.

Ankara would like to see those two coalitions join the Syrian National Army, which has emerged as an umbrella group for factions that have backed Turkey's operations in Syria. This would achieve Ankara's goal of “one front, one voice." Such umbrella groups, however, have failed in the past despite numerous tries.

Besides uniting its allies, Turkey needs to force Hayat Tahrir al-Sham, which controls Idlib city, to change or eliminate elements resisting change. Given that intransigent groups from various fronts are all clustered in Idlib now, forming one reasonable entity open to negotiation and compromise from this “jihadi reserve” is an uphill task. The token friendship of these groups rests on opportunistic motives and could turn into enmity any time.

Moreover, much like the situation it faced in Afrin, Turkey owes its current positions in Idlib to coordination with Russia. Any falling out with Russia and Iran could greatly complicate things for Turkey.