Ankara appreciates Iran’s position regarding the failed coup attempt in Turkey, but talk of a strategic "axis" between the two countries appears premature. 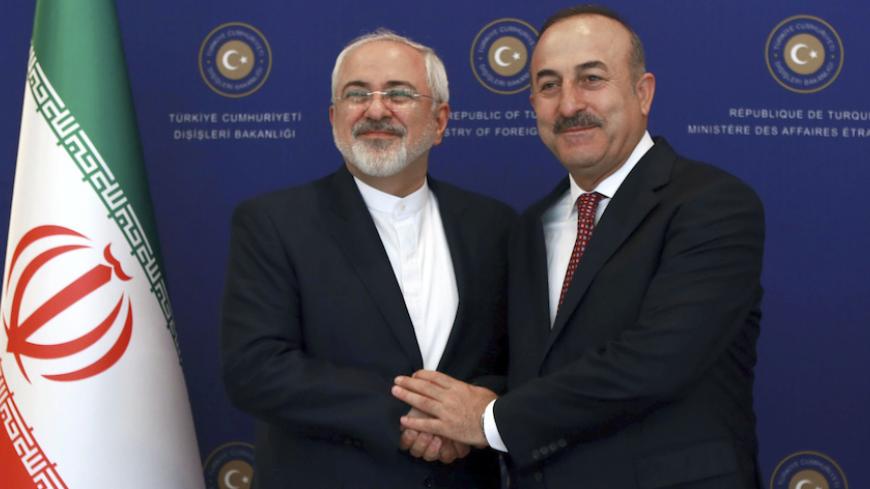 Like Moscow, Tehran is capitalizing on the favorable Turkish mood toward Iran because of its immediate support for President Recep Tayyip Erdogan and his ruling Justice and Development Party as the coup attempt unfolded July 15.

Iranian President Hassan Rouhani was among the first world leaders to call Erdogan after the failed coup to offer his support.

“During the coup night, I did not sleep until morning, nor did my friend Javad Zarif. He was the foreign minister I talked to most, calling me five times during the night," Cavusoglu said. Erdogan and Prime Minister Binali Yildirim also received Zarif warmly.

Turkey has been grateful for Iran’s position on the coup attempt in part because it contrasts sharply with the reticence of the West. Moscow’s similar early move to support Ankara and statements from Russian and Iranian government officials since the coup have fed speculation about a “new axis” between Ankara, Moscow and Tehran that could work together to end the Syrian crisis.

Abdulkadir Ozkan, a veteran Turkish columnist from the Islamist Milli Gazete, pointed out in a recent article that there are no lasting ties or enmities in Turkey's international relations, which he said are determined by other interests.

“These interests can change over time. Sometimes new alliances can be sought as protection against enmity, and sometimes existing alliances may start operating against a country’s interests,” he argued, claiming that the less-than-friendly positions toward Turkey taken by the United States and Europe were forcing Ankara to seek new arrangements with Russia and Iran.

Official Russian and Iranian statements have also encouraged such views. Zarif expressed satisfaction in Ankara over the improvement in ties between Turkey and Russia, which soured in November after Turkey downed a Russian jet on a bombing mission against anti-regime forces in Syria.

“We are very happy over the cooperation between Turkey and Russia, and are prepared to help this along. These three countries have to work for regional peace,” Zarif told reporters after his talks with Cavusoglu.

Zarif’s visit took place within days of an Aug. 9 summit between President Vladimir Putin and Erdogan in Moscow. The day before, Putin met Rouhani in Baku.

The Russian Sputnik agency quoted Iran’s Deputy Foreign Minister Ibrahim Rahimpour as saying prior to the Baku meeting that Putin and Rouhani would also discuss how they could help Erdogan. Pointing out that “Arab countries and the West could not provide this help,” Rahimpour said, “Our region requires that Russia, Turkey and Iran have good relations.”

Russia’s Deputy Foreign Minister Mikhail Bogdanov also fueled speculation about a new axis when he said in a statement after Zarif’s talks in Ankara that the three countries could meet soon on Syria. However, prospects for a genuine “axis” between the three countries remain questionable at best, given the significant differences that remain between Ankara and Tehran, and Ankara and Moscow regarding Syria.

Ankara remains opposed to President Bashar al-Assad staying in power, even though there are signs that it will accept a Syrian administration that includes Assad supporters. Moscow and Tehran, however, have made it clear that they are not prepared to bargain over Assad’s future. Ankara is also unhappy about Russian military operations against what it considers legitimate anti-Assad fighters as well as Iran’s overt and covert efforts to keep the regime standing.

Russia and Iran, for their part, continue to believe that radical Sunni groups in Syria they call terrorist organizations are being facilitated by Ankara, which they claim has prolonged the Syrian crisis. There are areas, though, where Turkish-Iranian interests overlap. For example, both countries underscored the importance of maintaining Syria’s territorial integrity during Zarif’s visit. Both countries are also united in their desire to block the aspirations of Kurds for an autonomous region in northern Syria, although Cavusoglu and Zarif did not spell this out openly during their press conference in Ankara.

Turkey and Iran also agree on the need to fight the Islamic State and similar groups operating in Syria and Iraq.

Given its strategic military ties with the West that are expected to continue despite current tensions and its developing ties with Saudi Arabia, Iran’s regional rival, Ankara also has to tread cautiously to avoid giving the impression that it is realigning its foreign policy in a way that would be detrimental to other countries.

Turkey got a taste of just how strained ties between Tehran and Riyadh are during the Organization of the Islamic Conference summit in Istanbul in April, when the tensions between the two sides surfaced openly, leaving Ankara caught in the middle.

Bozkurt Aran, a former Turkish ambassador to Tehran, points out that Iran is in the stronger position currently and is unlikely to accept Turkey’s stance on Syria. “Iran’s position with regard to Syria is a historic one. It is not realistic to expect this to change at a time when its influence in the Middle East is increasing,” Aran told Al-Monitor.

Aran likened Turkey and Iran to porcupines, saying, “When the weather is cold, porcupines stick close to each other to keep warm, but not so close that they prick each other.” He added, “Both sides are aware their political and military ties can only go so far.”

It is equally unlikely Ankara will do a complete about-face on Syria and accept Iran’s position, even if it is being forced by circumstance to recalibrate its policy to make it more realistic.

Instead of “strategic ties” between Turkey and Iran, the trend appears more to be the two countries moving toward restoring the status quo that existed before the Syrian crisis strained their relationship. Turkey’s improving ties with Iran while developing its ties with Saudi Arabia appear to suggest that Ankara is aiming for the middle ground it held in the region prior to the Arab Spring, from which it could also act as a mediator or facilitator in regional crises.

This fits in with Ankara’s new foreign policy orientation defined by Yildirim after he assumed power in May, when he declared that “increasing the number of Turkey’s friends while reducing the number its enemies” would be his priority.

The bottom line is that Turkey and Iran will most probably return to their traditional position of agreeing to disagree on specific issues while continuing to pursue their specific interests, but not allowing differences to undermine their overall ties. In the meantime, they will cooperate on regional issues to the extent possible.