What's behind the Turkey-Iran tango?

The coup attempt in Turkey appears to have set in motion momentum for possible cooperation between Turkey and Iran on Syria. 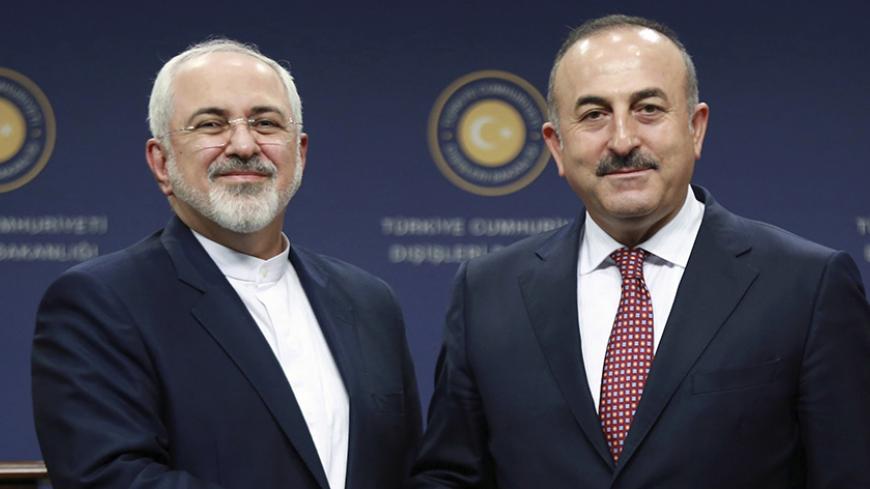 Iranian Foreign Minister Mohammad Javad Zarif’s surprise Aug. 12 visit to Turkey may always be remembered in Ankara, as well as in Tehran, for having opened a new chapter in regional cooperation between the two neighbors. The visit was the first by an Iranian official since the failed July 15 coup to overthrow Turkish President Recep Tayyip Erdogan. As such, it was part of Tehran's show of solidarity that began during the coup attempt, with phone calls from Zarif, Ali Shamkhani, the secretary of Iran’s Supreme National Security Council, and Qasem Soleimani, the head of the Islamic Revolutionary Guard Corps’ (IRGC) external operations wing, the Quds Force.

“Zarif went to Ankara to discuss bilateral relations and Syria,” a senior Iranian official told Al-Monitor on condition of anonymity, without providing specifics. To get an idea of what transpired in Zarif’s three-hour meeting with Erdogan and his talks with Prime Minister Binali Yildirim and Foreign Minister Mevlut Cavusoglu, Al-Monitor had to dig deeper, in several places.

“It’s an overstatement to say that Iran and Turkey have agreed on what to do on Syria,” an Iranian diplomatic source told Al-Monitor. “The good thing is that now there is solid ground to stand on, and goodwill, and it’s obvious that Turkey showed readiness to go further in discussing serious options to draft, along with Iran and Russia, a serious exit strategy that would put an end to the bloodshed in Syria.”

As for Tehran, it is clear that there is no chance of a solution in Syria without a serious regional partner, and that partner has to be either Turkey or Saudi Arabia. Given that Tehran’s relations with Riyadh grow worse by the day — amid a war of words, the conflicts in Yemen and Syria plus tensions over Bahrain and Lebanon — a Saudi-Iranian rapprochement is a dream unlikely to come true anytime in the near future.

In contrast, Turkey and Iran have preserved good relations despite sharp differences over the crisis in Syria. Indeed, one striking example is how, as the battle for Aleppo raged, Zarif and Erdogan were worshipping together at Friday prayers at the presidential mosque in Ankara.

Turkey and Iran both feel the Syrian heat, but they also believe that surrender is not an option. Turkey is ready to talk, perhaps about many things, among them the future of Syria’s defiant president, Bashar al-Assad, including how many months he might stay on or if he can run in the country’s next election. This is all on the agenda, but that doesn’t mean Turkey is relinquishing its objectives in war-torn Syria.

Iran is also ready to talk, and Assad’s future is part of the conversation that Tehran is willing to have. This is not, however, the same as Iran being willing to walk away from the sacrifices made by IRGC members killed in action in Syria or the many Hezbollah, Iraqi and Afghan fighters who lost their lives after having joined forces under the banner of the “resistance axis.” Both Iran and Turkey are trying to preserve their interests as they discuss a potential compromise. Thus, the best approach for the two countries is to focus on common interests or common threats while at the negotiating table.

One of the main threats both countries, as well as Syria, face is the prospect of the emergence of an independent Kurdish state, despite the differences among the Kurds, who are spread over the territories of Iran, Iraq, Syria and Turkey. The Kurdish challenge in Iran may not be identical to that in Turkey, but the danger of a domino effect in the region is so strong that no party wants to take any chances. In this equation, Russia also has a role to play in thwarting any attempt to carve out an independent Kurdish state in Syria.

The shared interest in preventing the emergence of a Kurdish state puts Iran and Turkey on the same page when it comes to exerting all possible efforts to keep Syria united and under centralized rule. In other words, Iran and Turkey may be on the path to once again being able to reach compromises. In this vein, another Iranian official who spoke to Al-Monitor on condition of anonymity said that in addition to the public high-level meetings that have taken place or are slated to take place between Iranian and Turkish political officials, there are military and security meetings ongoing behind the scenes.

The Iranian official added, “We will probably not hear whether Haj Qasem [Soleimani] has visited Istanbul or Ankara, or whether a high-level Turkish security official has come to Tabriz or Tehran. In practical terms, these men are the ones who can help craft the road map [for how to jump-start Iranian-Turkish cooperation].”

On Aug. 19, Iran’s Foreign Ministry announced that Cavusoglu had made an unannounced visit to Tehran the day before, meeting with his Iranian counterpart, Zarif, for five hours. Iranian Foreign Ministry spokesman Bahram Qassemi said the top Turkish diplomat “made a short visit to Tehran to follow up on the agreements and consultations held between the two countries during Zarif’s visit to Ankara last week.” Qassemi noted that during Zarif’s visit, the two sides had agreed to hold intensive talks at various levels and that senior officials would hold several meetings at various levels in the near future.

One Iranian official said on condition of anonymity, “The [Cavusoglu] visit was to provide answers [to Iranian queries] on several issues raised in the last [Aug. 12] meetings, but the important issue here is that it comes as Erdogan’s visit to Tehran is being prepared.”