Iran appears keen to snatch Turkey away from its traditional axis, but the two sides remain at odds over the Syrian crisis, the crucial starting point for any new chapter in bilateral ties. 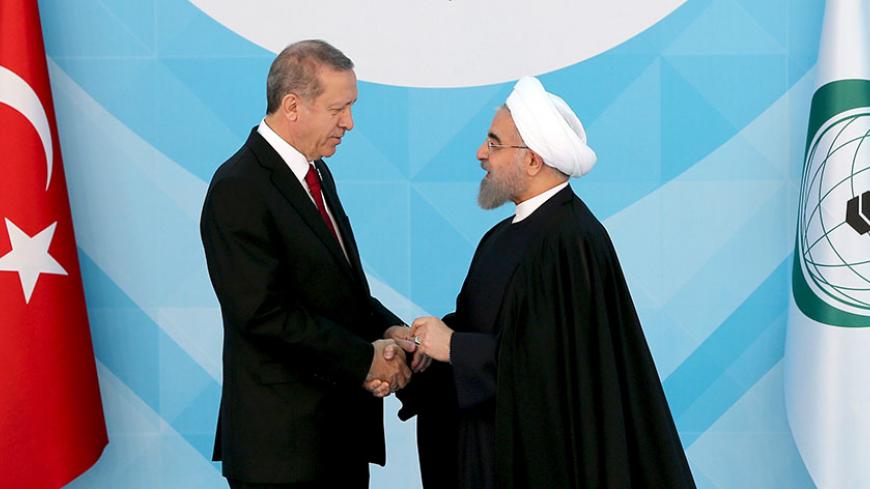 The aftermath of Turkish President Recep Tayyip Erdogan’s Aug. 9 meeting with his Russian counterpart, Vladimir Putin, has seen a flurry of Turkish-Iranian and Russian-Iranian contacts centered on the Syrian crisis. Expectations have grown that the bilateral contacts will turn into a trilateral mechanism. Statements from Moscow and Tehran have fed optimism that a common understanding is close, with officials highlighting the preservation of Syria’s territorial integrity, the Syrian people’s right to decide their future and the fight against terrorism.

As Ankara scrambles to make a foreign policy pivot, a series of important developments around the Syrian crisis have gone largely unnoticed. On June 9, the defense ministers of Iran, Syria and Russia came together in Tehran for the first time since the Syrian crisis broke out more than five years ago. According to Iranian state television, the meeting indicated that the Syrian war had entered its "final stage."

The July 15 failed coup attempt in Turkey led to a telephone call between Erdogan and Iranian President Hassan Rouhani in which the two discussed regional issues. Then, on Aug. 8, the leaders of Iran, Russia and Azerbaijan met in Baku and signaled that Turkey was welcome to join. “Neither Arab nor Western countries could give Erdogan the support that Vladimir Putin and Hassan Rouhani can give,” said Iranian Deputy Foreign Minister Ibrahim Rahimpour, as Erdogan made no secret of his displeasure with the level of Western support he received after the putsch.

Erdogan’s meeting with Putin in St. Petersburg the following day resulted in a decision to establish a “strong” bilateral mechanism to try to resolve the Syrian crisis involving intelligence, Foreign Ministry and military officials.

Three days later, on Aug. 12, Iranian Foreign Minister Mohammad Javad Zarif was in Ankara for critical talks on cooperation modalities in resolving regional issues, with the spotlight on the prospect of trilateral cooperation between Turkey, Iran and Russia.

On Aug. 15, Iran's Deputy Foreign Minister Hossein Jaberi Ansari hosted Putin’s special Middle East envoy Mikhail Bogdanov, and their agenda again focused on Syria. According to Ansari, who briefed Bogdanov on Zarif’s talks in Ankara, Turkey and Iran have agreed on fundamental principles for a settlement in Syria, including the protection of Syria’s territorial integrity and national unity and the establishment of a national government by the vote of the Syrian people. Asked whether an Iran-Russia-Turkey coalition was emerging, Ansari said Tehran did not seek alliances to inflame regional sensitivities, but to bring regional countries closer around the principle that “no foreign force would impose decisions from outside.”

So Tehran refrains from calling the crisscross diplomacy a trilateral mechanism. Any alliance between the three former imperial powers would be a historic development in any case, no matter if it were the result of pressure in Syria. Yet such an alliance requires much more than just cooperation on Syria.

No doubt, Turkish-Iranian rapprochement means a Turkey moving away from the US-Saudi-Jordan-Israel axis, especially with respect to the Syrian issue. But how far is this possible, given the two countries’ diametrically opposed stances on the Syrian crisis? Since Iran has stayed firm on its position, it would require much zigzagging on Turkey’s part.

Iran has long pressed a four-point proposal for a settlement in Syria, including a cease-fire; the establishment of a national unity government; a new constitution addressing the sensitivities of all ethnic and religious groups; and elections under international supervision.

The plan aims to enlist the support of the Syrian Kurds as well. Turkey, for its part, has come to a point where it advocates the departure of President Bashar al-Assad if possible, and if not, a political settlement that would undo the de facto Kurdish self-rule in northern Syria. In other words, Ankara is now more concerned with the Kurds than Assad.

So how are the two sides going to build on the fundamental principles said to be agreed on in Ankara? Let’s go point by point.

For Turkey, the sub-meaning of Syria’s territorial integrity is an end to Kurdish self-rule in northern Syria. Yet, Iran and Russia have a different approach on the issue.

This is not to say that Turkey and Iran disagree on any Kurdish moves toward independence — they both say that borders must not change. In its efforts to find common ground with Ankara on both Syria and Iraq, Tehran has long used the argument that the West is conspiring to redraw the region’s map, a fear that lies at the core of Turkey’s confrontation with the West today. Also, Iran is equally wary of the link between the main Syrian Kurdish actors — the Democratic Union party (PYD) and its armed wing, the People’s Protection Units (YPG) — and the Kurdistan Workers Party.

Yet unlike Turkey, Iran has never branded the PYD and YPG as terrorist organizations. On the contrary, it has lauded their struggle against the Islamic State.

Tehran’s approach on the Syrian Kurds has been largely defined by the policy Damascus has followed or will follow. In this context, Iran’s — and for that matter, Russia’s — sensitivities are displayed in two red lines: preserving Syria’s territorial integrity and making no more room for a US military role in northern Syria.

Given this delicate equilibrium, Ankara’s expectations regarding the Kurds could be counterproductive.

The second point Ankara and Tehran are said to have agreed on is the right of the Syrian people to the establishment of a national unity government and to determine their future without any external fiats. How this agreement could be advanced is equally unclear. Turkey has yet to make any explicit statement endorsing a process involving Assad, while Iran’s stance in favor of the Syrian leader is clear. Most recently, Ali Akbar Velayati, Supreme Leader Ayatollah Ali Khamenei’s foreign policy adviser, reiterated that Iran remains firm on its position.

And when it comes to fighting extremism and terrorism, everyone describes their own elephant. Iran speaks of uprooting groups directly or indirectly supported by Turkey, including Jabhat al-Nusra — or Jabhat Fatah al-Sham, as it calls itself now. Turkey, for its part, continues its game with those groups, though it has reached the end of the road. Last week, it reportedly allowed some 1,000 Aleppo-bound fighters to cross into Syria.

The Iranians believe the crisis will be largely resolved if Turkey seals its border. Russian Foreign Minister Sergey Lavrov’s statement last week is important in this regard. Lavrov said an understanding has been reached with Turkey for international monitoring at two key border crossings in line with Resolution 2165 of the UN Security Council. The resolution calls for UN supervision at the Bab al-Salameh and Bab al-Hawa crossings, which are used to transport humanitarian relief supplies. Yet Turkey’s acceptance of UN supervision, as advocated by Lavrov, would mean also an end to the flow of militants and logistical supplies for armed groups in Syria. Ankara remains silent on the issue.

With its prompt and unequivocal support for Erdogan during and after the coup attempt, Iran grasped an opportunity to draw Turkey closer. What Iran is offering is not just a long-sought partnership to resolve the Syrian crisis, but a new axis that requires broader partnership on regional and global issues. The conservative Turkish foreign policy, meanwhile, tells Ankara to stay on good terms with Iran, refrain from antagonizing Russia, lean on the East and turn its face to the West. And history does teach that Persians and Turks can overcome regional conflicts when they are on good terms, while their issues are amplified when they are not.