Analysts say the AKP government has itself to blame for Turkey’s loss of prestige and influence in its region, where it has more rivals than friends today. 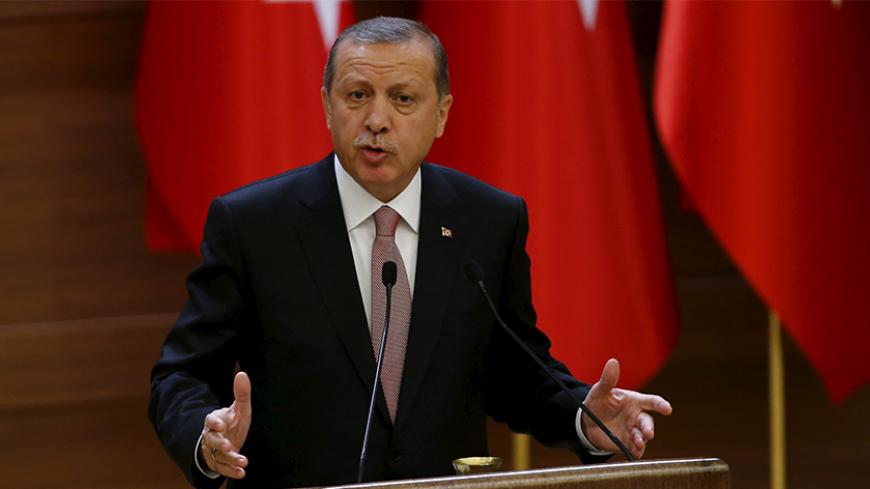 Turkish President Recep Tayyip Erdogan makes a speech during his meeting at the Presidential Palace in Ankara, Nov. 26, 2015. Erdogan said that Turkey was taking precautions to stop oil smuggling at its borders, a key source of revenue for the Islamic State. - REUTERS/Umit Bektas

A Turkish saying roughly translates to “You can tell what will happen Thursday by looking at Wednesday.” Viewed in this light, Turkey's 2015 foreign policy problems may shed light on what it will face in 2016.

The ruling Justice and Development Party (AKP) could have moved cautiously, given Turkey’s dangerous geostrategic place on the map. Instead, AKP's Islamist/Sunni-based ideological orientation, and its overreaching ambitions laced with an inflated sense of Turkey’s abilities, resulted in a growing crop of conflicts between Turkey and its neighbors.

One recent development in this regard came in late November when Turkey downed a Russian fighter jet it said had strayed into Turkish airspace while bombing Turkish-supported groups fighting the regime in northern Syria. This left Russian President Vladimir Putin fuming, accusing Turkey of “stabbing Russia in the back,” and shook Turkish-Russian relations to the core.

In the past, relations were carefully calibrated to weather storms so as not to harm vast, mutual economic interests. Those ties are now in tatters. The nosedive in relations with Russia is set to complicate Ankara’s already difficult position in Syria and Iraq in 2016.

Given the 18-month road map to resolve Syria's situation — a plan worked out in Vienna earlier this month — President Recep Tayyip Erdogan and Prime Minister Ahmet Davutoglu are unlikely to achieve their long-lasting desire to see the back of Assad in 2016.

Meanwhile, the alliance against the Islamic State (IS) between the United States and the Democratic Union Party (PYD), the umbrella organization of the Syrian Kurds that Turkey sees as a “terrorist organization,” is also likely to survive in 2016. The PYD's armed wing plays a significant role in the US-supported Syrian Democratic Forces (SDF), which is making serious advances against IS in northern Syria.

Turkey could face a crisis early in 2016 when the SDF starts moving west of the Euphrates River. If this region comes under Syrian Kurdish control in any way, the Kurds will gain a corridor linking Kurdish northern Iraq with the Mediterranean Sea. Ankara has therefore declared the Euphrates a red line.

But with US support for the Syrian Kurds, who are also being courted by Russia, Ankara’s options to enforce that red line are limited. Turkey could try to convince the United States to prevent such a development, which would have negative consequences for the security and stability of Turkey, a NATO ally.

Washington is more likely, however, to urge Ankara to enter a dialogue with the PYD, despite its links to the Kurdistan Workers Party (PKK), which is waging a war for Kurdish autonomy in Turkey. The United States will also continue to exhort the Syrian Kurds to refrain from actions that will give Ankara cause to complain.

Turkey’s failed attempt earlier in December to deploy troops in the town of Bashiqa in Iraq near Mosul, also showed that Ankara does not have Washington’s automatic support when it comes to its unilateral decisions regarding Iraq, and that it is Washington that has leverage over Ankara.

Talking with Erdogan over the phone Dec. 18, US President Barack Obama insisted that the Turkish troops be withdrawn, in line with Baghdad’s demands, and called for Iraq’s sovereignty and territorial integrity to be respected.

This was not just a blow to Turkey’s prestige, but also to its plans of gaining a military foothold in Iraq’s Sunni heartland. Ankara says it sent troops to Bashiqa to protect the camp where Turkish military personnel have been training local fighters against IS for months. But this clearly failed to allay doubts in the region, and in Washington, about its true motives.

This development weakened Ankara’s hand in the region further, thus prompting new questions about the AKP’s ability to pursue a coherent foreign policy. Many wondered how Turkey could have assumed that deploying troops in Iraq without informing Baghdad would not have consequences.

None of this suggests that Ankara’s influence in the region will improve. Aware of its growing isolation, Ankara sped up its diplomatic efforts for a rapprochement with Israel toward the end of 2015. While this could turn into a diplomatic breakthrough for Ankara, the deal is far from done. There is no indication that Israel is prepared to comply with Ankara’s demand that the Gaza blockade be lifted. There is also the outstanding issue of whether Ankara will comply with Israeli demands regarding Hamas, with which the AKP feels a close affinity.

Turkey’s ties with Europe in 2016 will be determined by the fight against Islamic terrorism and the refugee crisis emanating from Syria. The EU-Turkey summit in November resulted in a joyful declaration by Davutoglu that “a new chapter had been opened in Turkey’s ties with Europe.” European leaders also promised to help energize Ankara’s bid for EU membership.

But Turkey’s ties with Europe will be predicated on issues that have little to do with Ankara’s EU bid. While more cooperation is expected on the issues of Islamic terrorism and refugees, the European Union remains concerned about the AKP’s Islamist/Sunni leanings and its less-than-democratic policies at home, which are not expected to change in 2016.

Soli Ozel, who lectures on foreign policy at Istanbul’s Kadir Has University and is a columnist for the daily Haberturk, is among those who believe that the AKP has only itself to blame for this overall situation.

“By aiming at targets way above its capacity at the start of the Arab revolts, Turkey ended up condemning itself to a position that will be considerably below its capacity,” Ozel said in a recent commentary.

Taha Akyol, a prominent columnist for the daily Hurriyet, is also among those who believe AKP is the victim of its ambitions, shortsightedness and hubris in the Middle East.

“[AKP’s] extreme obsession with power has in recent years produced authoritarianism at home, and a politically defiant tone abroad, especially after the events following the Arab Spring,” Akyol wrote recently. He added that statements from Ankara during this period “far exceeded Turkey’s power.”

The fact that Ankara went beyond its capacity in that way, while making its Sunni leanings apparent, also shows there will be no role for Turkey as a mediator or facilitator in any dispute in the region in 2016, especially ones fueled by sectarian divisions.

Akyol suggests that Turkey's increased dependence on the West, in view of the crisis with Russia, and Turkey's effort to improve ties with Israel could be signs that Ankara is moving toward more rational approaches to foreign policy. Many argue, however, that this is wishful thinking because the Islamist/Sunni-based ideological outlook is part and parcel of AKP’s makeup, and is therefore unlikely to change.

Retired Ambassador Unal Cevikoz, a trustee and lecturer at Kadir Has University, has his own take on the topic. Turkey will achieve real change only when it stops interfering in other countries' domestic affairs and announcing "who should be running, or not running neighboring countries," Cevikoz wrote recently in his column for the daily Radikal.