Is Saudi Arabia next target of Islamic State? 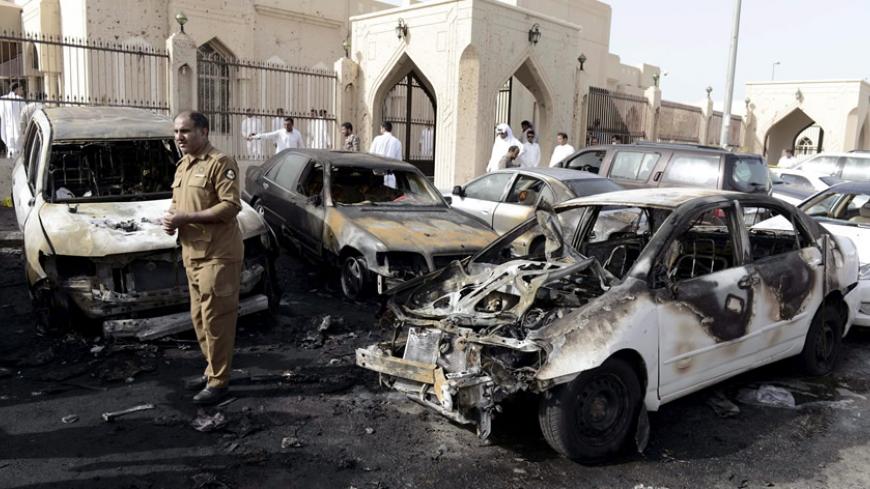 A policeman carries out an inspection after a car exploded near the Shiite Al-Anoud Mosque in Saudi Arabia's Dammam, May 29, 2015. The Islamic State claimed responsibility for the bombing that killed four people. -

Kingdom of Saudi Arabia may be forced to shift priorities

This week, Bruce Riedel laid out the daunting challenges facing Saudi Arabia in 2016, including a seemingly endless and costly war in Yemen and the largest budget deficit ever, as oil prices continue to slide.

Riedel wrote that Riyadh hopes that the new Islamic Coalition will “silence criticism that the Saudis and their allies are doing too little against IS [Islamic State] in Syria and Iraq because of their commitment in Yemen.” While the Saudi effort may have the potential to serve as “a platform for more effective countermeasures in the ideological battle by mobilizing Islamic clerics,” the coalition’s sectarian bent is hard to conceal. The kingdom considers Iran, which is not a member of the coalition, as a lead sponsor of terrorism in Syria and Yemen. While the kingdom has until now considered the battle against Iran a higher priority than the fight against al-Qaeda and IS, circumstances in the coming year may force a change in priorities. IS leader Abu Bakr al-Baghdadi on Dec. 26 mocked the coalition and called on the kingdom’s citizens to “rise up against the apostate tyrants, and avenge your people in Syria, Iraq and Yemen.”

The United States and its allies expect Saudi Arabia to step up in battling IS and al-Qaeda, and in the end, that is how the alliance will be judged, at least in Washington and European capitals. The threat from IS to the kingdom is likely to grow. Saudi security forces broke up a cell linked to IS in 2014, and the terrorist group claimed credit for two bombings in 2015 that killed 36 people. IS continues to hold ground in Iraq and Syria, maintains a cell network in Europe and is expanding its presence in Afghanistan, Yemen and North Africa. The kingdom is, of course, not a “fragile” state like Iraq, Syria, Yemen, Libya or Afghanistan, but neither is France or Belgium. Unlike Syria and Iraq, which have ethnically and religiously diverse populations, Saudi Arabia’s population is 85-90% Sunni Muslim. And if IS continues to lose ground in Syria and Iraq, as it did in Ramadi last week, it may seek other nearby targets to rally its followers. As this column reported in December, the kingdom’s hosting of the Syrian opposition conference last month may eventually serve to turn IS and al-Qaeda on the Saudi and Western-backed armed groups, which have been mostly preoccupied with fighting the Syrian government until now. In other words, IS may be taking the fight to Saudi Arabia, even if the kingdom would prefer to keep its prime focus on Bashar al-Assad and Iran.

Semih Idiz this week painted a bleak picture of the prospects for Turkish foreign policy in 2016. Reflecting on the disastrous decision to send a more expansive military force to a Turkish training facility in Iraq, Idiz wrote, “This development weakened Ankara’s hand in the region further, thus prompting new questions about the AKP’s [Justice and Development Party] ability to pursue a coherent foreign policy. Many wondered how Turkey could have assumed that deploying troops in Iraq without informing Baghdad would not have consequences. The AKP’s policies have left Turkey facing the United States in Iraq — where Ankara also faces Russia and Iran — and facing Russia and Iran in Syria, where it is not completely on the same page with the United States, either.”

Idiz added, “None of this suggests that Ankara’s influence in the region will improve. … Turkey’s ties with Europe in 2016 will be determined by the fight against Islamic terrorism and the refugee crisis emanating from Syria. The EU-Turkey summit in November resulted in a joyful declaration by [Prime Minister Ahmet] Davutoglu that ‘a new chapter had been opened in Turkey’s ties with Europe.’ European leaders also promised to help energize Ankara’s bid for EU membership. But Turkey’s ties with Europe will be predicated on issues that have little to do with Ankara’s EU bid. While more cooperation is expected on the issues of Islamic terrorism and refugees, the European Union remains concerned about the AKP’s Islamist/Sunni leanings and its less-than-democratic policies at home, which are not expected to change in 2016. … The fact that Ankara went beyond its capacity in that way, while making its Sunni leanings apparent, also shows there will be no role for Turkey as a mediator or facilitator in any dispute in the region in 2016, especially ones fueled by sectarian divisions.”

Despite the ruling AKP’s win in the November 2015 general elections, one might wonder about the threshold for discontent within the AKP and the military given Erdogan’s record of foreign policy failures. The Turkish president will continue to fend off domestic challenges by playing the “security card” at home. He believes he has a winner in a brutal campaign against increasingly radicalized and localized Kurdish armed groups in southeastern Turkey. Metin Gurcan does not rule out that the violence may soon spread to Ankara and Istanbul. He writes, “As long as the government keeps stepping up its pressure on Cizre and Silopi, Ankara and Istanbul could become targets of sensational operations directly targeting civilians and designed to paralyze the cities. The PKK's [Kurdistan Workers Party] ability to use proxies in its battles is expanding; it is perfectly capable of organizing attacks and then denying involvement or even condemning the acts. Neither Ankara nor the PKK appear willing to acknowledge the social and economic costs of increasingly urbanized clashes and the use of proxies. In the end, innocent civilians are paying the price.”