How Biden annoyed Ankara during his recent visit to Turkey

Was the US vice president's awkward talks with the Turkish president and prime minister a harbinger of even more tension in already strained ties between the two countries? 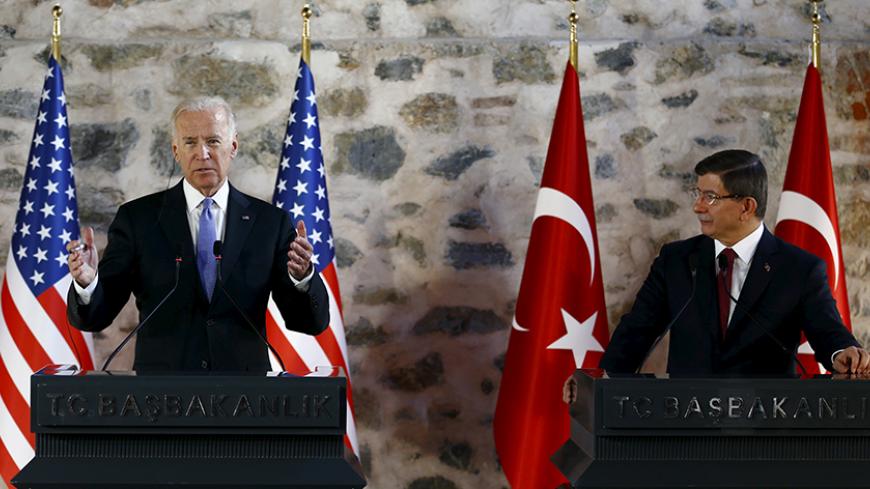 The high-profile visit by US Vice President Joe Biden to Turkey last weekend produced little satisfaction and much annoyance in Ankara, especially with regard to Washington’s position on the state of democracy in Turkey and on certain developments in Syria.

Many analysts see Biden’s awkward talks with President Recep Tayyip Erdogan and Prime Minister Ahmet Davutoglu as a harbinger of tense moments to come in what are already strained ties between the two countries. Few, however, expect a break in ties because neither can afford that.

Ankara expected criticism from Biden with regard to what independent human rights organizations and media watchdog groups say is the hounding of journalists critical of the government’s policies and academics opposed to its current war against the Kurdistan Workers Party (PKK).

The government’s irritation, however, intensified when Biden met members of civil society groups and prominent journalists known to be in the government’s crosshairs, expressing solidarity with them ahead of talks with Erdogan and Davutoglu.

"When the media are intimidated or imprisoned for critical reporting, when Internet freedom is curtailed and social media sites … are shut down and more than 1,000 academics are accused of treason simply by signing a petition, that’s not the kind of example that needs to be set," he told reporters. Biden was referring to the imprisonment of Can Dundar, the editor-in-chief of Cumhuriyet who is in prison for reporting on the government’s illegal arms shipments to anti-regime groups in northern Syria.

He was also referring to the 1,128 academics being investigated for a petition they signed against the way the government has been conducting its war against the PKK, involving great collateral damage.

Ankara’s answer to Biden was not long in coming. “Encouraging terrorism is a crime anywhere in the world. I don’t know who prepared Mr. Biden’s program, but it is clear they did not want him to see the full picture of what is happening in Turkey,” Davutoglu told reporters prior to meeting Biden.

The pro-government media was also quick to lambaste Biden. Under the headline “Look who's talking,” a Yeni Safak editorial argued that 75 academics had been fired in the United States for claiming Washington was behind the 9/11 attacks. It also claimed that criticizing Israel was illegal in the United States and went on to ask whether Biden was also in solidarity with whistleblowers Edward Snowden and Julian Assange.

However, differences with regard to the Democratic Union Party (PYD), the umbrella organization of the Syrian Kurds, and the People's Protection Units (YPG), its military wing, emerged as the principal stumbling block in Biden’s talks with Davutoglu and Erdogan. Turkey considers the PYD and YPG terrorist organizations because of their links to the PKK. The United States, however, has allied itself with these groups in Syria and does not treat them as terror groups.

Ankara is now demanding that the PYD be barred from the Geneva talks on Syria, but appears to have made little headway in this respect during Biden’s visit. Differences on this score were also visible during the joint press conference Davutoglu and Biden held after their talks.

Despite Davutoglu’s multiple references to the YPG as a “terrorist group,” Biden restricted himself to merely saying that the United States supports Turkey’s fight against the PKK and studiously refrained from addressing either group.

Turkey is said to be considering boycotting the Geneva talks if the PYD is represented there in any shape or form. Murat Yetkin, the editor-in-chief of Hurriyet Daily News and a prominent columnist for Radikal, explained the reasons behind Ankara’s strong opposition to the PYD.

“Ankara, for security reasons, does not want a PKK-linked Kurdish group controlling an entire belt along the 910-kilometer [565-mile] Turkish-Syria border. The Turkish government thinks that a stronger PYD means a stronger PKK, which could further antagonize Turkey’s terrorism problem originating from the Kurdish issue,” Yetkin wrote for Hurriyet Jan. 26.

Pointing to a “complicated picture,” Yetkin said that boycotting the Syria talks “could make life difficult for the Turkish government.” He added, however, that “it would not make it easier for other countries and parties” either.

Retired Ambassador Unal Cevikoz, who lectures on international politics at Istanbul’s Kadir Has University and also writes for Radikal, pointed out that the PYD does not just have US support, but also the support of Russia and Iran.

“They consider the PYD one of their most important allies in the fight against [the Islamic State] in Syria and believe it has to have a place in the future Syria,” Cevikoz argued in his column earlier this week.

Cevikoz went on to maintain that Ankara’s insistence on opposing the PYD was also leading many countries to question whether Turkey is sincere when it says it wants to see a swift end to bloodshed in Syria.

While meeting Biden in the plush surroundings of Istanbul’s Ottoman-era Yildiz Palace, Erdogan reportedly also stressed that the PYD was a terrorist organization that must not be at the table on Syria.

Tellingly, however, the press conferences planned for after the Erdogan-Biden talks was canceled, fueling speculation that the sides did not want their differences on this and other issues to be come out in front of the media.

Yasin Aktay, a deputy from the ruling Justice and Development Party who is also a columnist for Yeni Safak, argued that the US side would suffer the consequences of remaining deaf to Ankara's exhortations about the PYD.

“The US has already damaged the understanding between allies by supporting the PYD and its extensions, which are involved in acts of enmity against Turkey,” Aktay wrote in his column. He warned that the price of cozying up to a merciless terrorist organization could be losing Turkey‘s friendship.

One topic on which a partial agreement was reached during Biden’s visit was the question of Turkey’s controversial deployment of forces in Bashiqa, near Mosul. Iraq considers the move a violation of its sovereignty and has demanded that the Turkish troops be withdrawn.

In a recent phone conversation with Iraqi Prime Minister Haider al-Abadi, US President Barack Obama also called for the Turkish troops to be withdrawn and demanded respect for Iraq’s territorial integrity and sovereignty.

Unidentified Turkish officials told the press later that the sides had decided during Biden’s visit to “strengthen coordination and proceed with new initiatives on the Bashiqa camp,” though they did not elaborate.

Deniz Zeyrek, the Ankara correspondent for Hurriyet, cited unidentified sources as saying that the camp in Bashiqa, where a small number of Turkish soldiers have been training local forces against IS, will be turned over to the US-led coalition.

According to the arrangement, the Iraqi forces will also have a presence there to reaffirm Iraqi sovereignty. The deal, however, has not been finalized because Baghdad has yet to endorse it.

The bottom line is that divisions between Ankara and Washington were not bridged during Biden’s visit. All signs indicate that disagreements between the two countries on these issues will continue. This does not mean, however, that there will be a break in ties.

Turkey’s need for the United States has increased after its relations with Moscow soured to the point of near-enmity following the downing of the Russian jet in November. Washington’s need for Turkey, on the other hand, especially with regard to using strategically placed Turkish bases in the fight against IS, will also continue for the foreseeable future.

Most analysts agree that this mutual dependence will ultimately ensure that the sides continue to stress their relationship as a “strategic partnership,” even though it may not appear to be so at times, and prevent existing tensions from boiling over.