Are Turkey, Saudi Arabia working together against Iran? 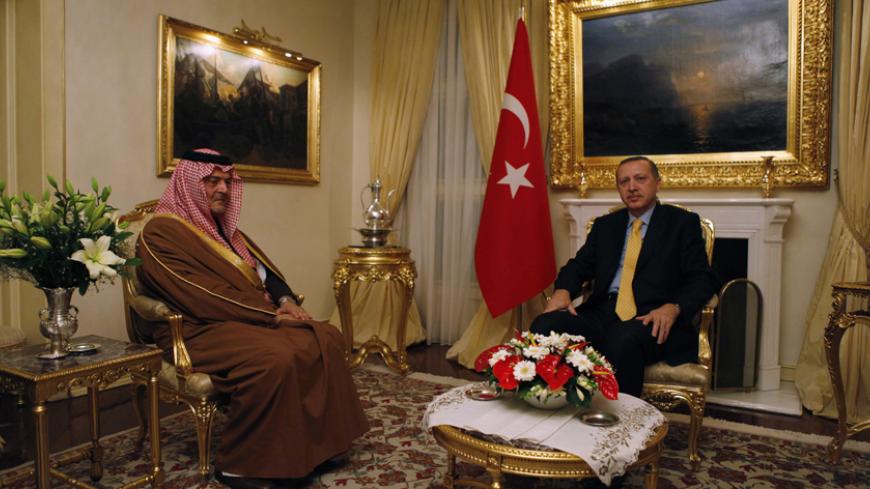 The relationship between Turkey and Saudi Arabia until now has been treated as almost sacrosanct and is one that is not argued about. Although Turkish and Saudi views on regional issues do not always coincide, both Ankara and Riyadh have kept their bilateral relations away from regional squabbles. Turks, in general, associate Saudi Arabia with pilgrimage (hajj) and oil prices. Aware of the tense rivalry for regional influence between Saudi Arabia and Iran, Turkey has tried to maintain good relations with both countries, and it was in Syria that Turkish and Saudi interests meshed. Although they agree that Syrian President Bashar al-Assad must go, the Turkish-Qatari axis competes with that of Saudi Arabia in Syria. Some suggest that the failure of the Syrian opposition to get its act together was because of this competition. A similar rivalry is now seen in Egypt because of the Justice and Development Party (AKP) government’s backing of the Muslim Brotherhood, and in Libya because of the AKP’s support of the Tripoli government instead of the one in Tobruk. Although Saudi Arabia is the most prominent supporter of Egyptian President Abdel Fattah al-Sisi, who toppled the Muslim Brotherhood, and of the Tobruk government in Libya, Turkey has not raised its voice against Riyadh while disparaging other countries. Now, Erdogan is adding a new controversial dimension to the unblemished Turkish relationship with Saudi Arabia.

During his visit to Saudi Arabia between Feb. 28 and March 2, Erdogan in his meeting with the new Saudi king, Salman bin Abdul-Aziz Al Saud, reached an agreement to increase Saudi-Turkish support of the Syrian opposition to levels that would enable the two countries to achieve their goals there. According to journalists accompanying Erdogan, Salman also promised to support Turkey in declaring a no-fly zone.

The two leaders, in addition to discussing Syria, Iran, Yemen, Palestine and Egypt, also reached an understanding that illustrates how Turkey is now being dragged into the much more dangerous issue of Iran.

The pro-government daily Yeni Safak described the Saudi-Turkish understanding as follows: “Iran’s sectarian approach in the region was on the agenda of the two leaders. Both were disturbed by Iran’s expansionist and sectarian attitude. Iran is spending massive resources on shedding Muslim blood and destabilizing Muslim countries.”

Thus, Saudi Arabia, uncomfortable with Iran’s growing influence over Iraq, Syria, Lebanon and Yemen, is pulling Turkey to its side. The new Saudi-Turkish alliance seems to be an effort by the Sunnis to form a bloc against the Shiite world. Turkey, which succeeded in staying away from sectarian conflicts until the AKP came to power, is now becoming a part of a sectarian polarization for the sake of blocking Iran.

Salman, faced with the political crisis in Yemen as soon as he took power, is now hoping to change the power balance in the region by attracting Egypt and Turkey to his side. Whether Salman will succeed depends on his ability to end the hostilities between Erdogan and Sisi. But the first political encounter between Salman and Erdogan did not yield that outcome. Salman met with Sisi a day before meeting Erdogan, in an effort to keep the Egypt issue on the sidelines, while nurturing the Saudi-Turkish friendship. Before taking off for Riyadh, Erdogan, when asked if he was going to meet Sisi, replied: “You must be joking. For such a thing to happen there must be serious, positive steps.”

When journalists on Erdogan's plane back to Ankara asked whether the various sensitivities in regard to Egypt will affect the relationship between Turkey and Saudi Arabia, Erdogan replied: "There may be differences but they are not at a level to affect our bilateral relations. Our goal is to anchor Turkish-Saudi relations for [the benefit of] the Middle East and Islamic world. I was informed, for instance, that they have the same views in regard to a no-fly zone and safe zones in Syria, and a train-and-equip program. We must treat the Egypt issue separately, as [it] should not cast any shadows on our relationship with Saudi Arabia."

Asked if the Saudis had made a proposal for peace with Egypt, Erdogan said: "Of course, they want us to reconcile with Egypt at high levels but they don’t insist.”

It is not easy to guess what will satisfy Erdogan toward normalization with Egypt, but it may well be that a new government in Egypt after the coming elections may be the opportunity that is needed.

Salman’s real concern is to form a Sunni bloc to limit Iran's influence. Erdogan, who in recent years has interfered in Iraq’s domestic affairs to achieve just that, is now trying to end his diplomatic isolation by encouraging Salman to include Turkey in the Saudi plan.

But their reported accord on Syria is a hopeless case. It is almost impossible for Turkey and Saudia Arabia — in light of their goal to ensure a Syrian opposition victory against Assad — to alter Washington’s declared goal of “[prioritizing] the Islamic State, not Assad.” The no-fly zone is a plan that nobody except Erdogan talks about. As the Islamic State becomes a true threat to everyone, it simply does not look feasible for Turkey to persuade even one of its NATO allies, let alone the UN Security Council.

This is why Erdogan’s anger is directed against Iran, which he holds responsible for the failure of his regional ambitions. But there is a serious miscalculation here. Despite their regional rivalry, Turkey has never deviated from its stable relations with Iran in the past. The two countries have not been engaged in a border conflict since 1639 and realize the importance of understanding each other, and somehow getting along.

However, this new polarization Ankara officials promote as “partnership against sectarianism” may well serve only to inflame sectarian conflict and negatively impact that stability.

Veteran writer Murat Yetkin, when noting that the United States and Israel will be the ones profiting from this move, issued a well-placed warning: “The Saudi dynasty seems to feel besieged. They are thinking of overcoming that sentiment by forming a Sunni bloc against Iran. Israel will of course be delighted with the idea and the United States may feel it is obtaining another pressure element against Iran in their nuclear talks. The Saudis, well aware of Iran’s influence on the Shiites and other non-Sunni Muslims, want to pull in Turkey and Egypt to the bloc they want to form. Yes, that's right — they want to make use of the vast Sunni population of Turkey, an ... [early] member of the Council of Europe, a member of NATO and a candidate for European Union [membership]. Even if Turkey and Egypt are reconciled with a magic wand, Turkey has to stay away from this anti-Iran or anti-Shiite front. … Escalating sectarian tensions in the region will have no benefit for Turkey and any other country. It will mean more violence and death. While the troubles caused by Turkey’s Syria policy are there for all to see, there is no need to become a part of even a more serious polarization and confrontation.”

In short, persisting with a bankrupt Syria policy, which brought with it major problems, and entering into a sectarian alliance, which will provoke a complicated confrontation with Iran, can only be a new and critical miscalculation that will shift Turkey from its course that it has been so proud of until now.