Foreign policy experts say Erdogan may dream of leading the Sunni world but Ankara has painted itself into a corner by insisting on misguided policies. 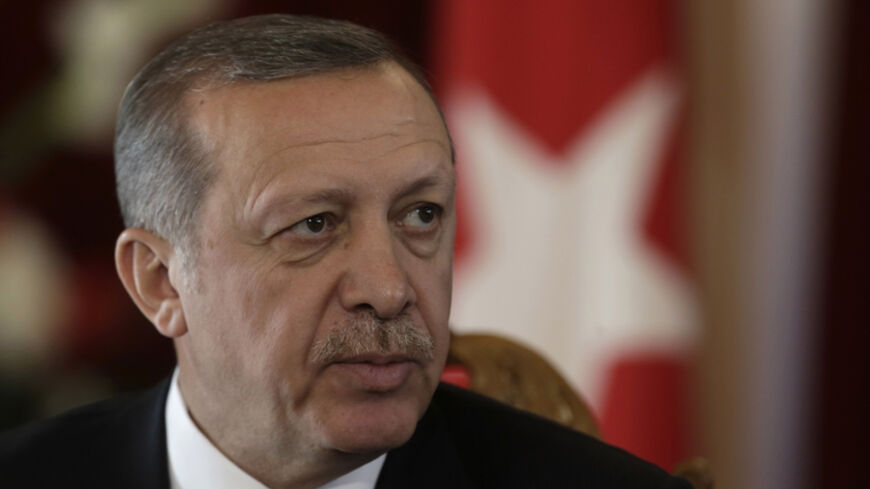 President Recep Tayyip Erdogan, not Prime Minister Ahmet Davutoglu, is calling the shots in Turkey today and is at loggerheads with the United States over the significance of the threat from the Islamic State (IS). He can do little, though, except vent his frustration, as Washington pursues policies in Syria that are at odds with his wishes.

Russia and Iran — two key powers whose influence in the Middle East also outstrips that of Turkey — are compounding Ankara’s complications. Both countries continue to oppose Turkey’s policies, which are predicated on the ouster of Syrian President Bashar al-Assad. In doing so, they have effectively upset Erdogan’s dream of leading the Sunni world, according to Turkish experts.

Russia and Iran may hold different positions from that of the United States with regard to the future of the Assad regime. Erdogan nevertheless faces a unified conviction in Washington, Moscow and Tehran that the priority in Syria today is confronting IS. It is little wonder then that Erdogan’s frustration over this state of affairs has begun to show.

Traveling back to Turkey from an official visit to Latvia on Oct. 26, Erdogan told reporters accompanying him on his plane that Washington was still noncommittal on the need to get rid of Assad.

“They have to erase this particular idea from their minds on the question of whether Assad will go or not. There is this mentality in the West: 'If Assad goes who will replace him?' But they are not bothering to consider that the person to come will be a person elected by the people,” Erdogan said.

These words indicate that Erdogan’s expectation for Syria has not changed. His remarks concerning the “will of the people,” when combined with his majoritarian understanding of democracy, reveal that he expects Syria’s majority Sunnis to ultimately predominate, despite Syria’s large Alevi and Christian minorities.

Given his close affinity to Egypt’s Muslim Brotherhood, whose cause he continues to champion — also much to the annoyance of the majority of Arab governments — it is not hard to figure out what kind of a government Erdogan wants to see in Syria.

Retired Ambassador Temel Iskit, a respected commentator on foreign policy issues, also underlined this point for Al-Monitor. “Erdogan has a Sunni-based ideological outlook and is playing for the leadership of the Sunni world,” Iskit said. “He knows the Sunnis will come to power if Assad is toppled,” he added, pointing out that Assad’s survival represents a major obstacle for Erdogan in this respect.

Erdogan’s attitude makes short shrift, however, of the very real question of who will replace Assad if there is no orderly transition process that also involves elements of the present regime. His confidence about the ability of Syrians to peacefully elect their new leader after Assad appears naive, given all that has happened in Syria.

Diplomats say the West increasingly fears that toppling Assad without a coherent transition strategy will leave an authority vacuum that will be filled by groups like IS. Before IS dominated the agenda, the United States and Russia had effectively agreed that the Assad regime, if not Assad himself, had to be involved in any transition formula.

Erdogan told reporters on his way back from Latvia that Turkey did not see eye to eye with Russia on Syria. “We discussed this matter a lot with them, but lost much time despite these discussions. Russia continues to support Syria,” Erdogan said, admitting that Ankara has failed to sway Moscow.

Erdogan is also angry with Russia for opposing a buffer zone — a "safe haven," as Ankara refers to it — and a no-fly zone over it in Syria, ostensibly for Syrian refugees. Moscow has officially declared that it will not allow such a zone to be established without UN Security Council approval, which clearly cannot be secured due to Russian opposition.

"I think we fundamentally will not allow this scenario," Foreign Ministry spokesman Alexander Lukashevich said in June.

Erdogan also had harsh words for Iran, which he accused of “dishonesty” over Iraq and Syria. “When we meet them bilaterally, they say, 'Let us solve these problems together.' But when it comes to taking steps, regretfully they have their own method of working. This is very sad, of course. This is why we cannot find a comfortable working base with Iran. They are putting their sectarian approach very much up front,” Erdogan said.

Erdogan’s remarks indicate that there is an inhibited dialogue between Ankara and Tehran, as Iran in turn accuses Turkey of playing the sectarian card in the region by openly favoring the Muslim Brotherhood and other Sunni groups, including radical ones like IS and Jabhat al-Nusra.

Iran, like Russia, is also firmly behind Assad and staunchly opposed to Turkey’s idea for a buffer zone and a no-fly zone in Syria. Joanna Paraszczuk explained in an Oct. 15 piece for Radio Free Europe/Radio why Moscow and Tehran are opposed to this idea: “First, because it would certainly involve the deployment of foreign forces on Syrian soil, and second, because any no-fly zone could set a precedent of similar zones that would hamper the ability of the Syrian military, which relies heavily on air power, to combat rebels including the US-backed Free Syrian Army.”

A question emerges from this overall picture of Turkey at odds over Syria not just with its regional rivals, but also with its close allies: How does Erdogan hope to have a say in regional developments when Ankara has such differences with almost all the powers that are influential in the region?

Experts and diplomats agree that there is an inverse relationship between Turkey’s capacity to be influential and the increasing international anger toward Ankara.

Mehmet Yegin, a Middle East expert for the Ankara-based International Strategic Research Organization, believes that Turkey has to “establish the right balance between what it desires and what it can achieve” if it wants to be influential in the region.

“It is not possible for Turkey to fulfill all of its desires. But it can fulfill some of them by working closely with some of the principal actors,” Yegin told Al-Monitor. “This, however, will bring about new agendas, which will require flexibility in approach and also standing more closely with allies,” Yegin said.

He added that there was no use in persisting with approaches that have clearly failed to produce any results. Iskit believes that Turkey has painted itself into a corner that will be difficult to get out of. He pointed specifically to the entrenched international impression that Ankara has been soft on IS and similar Sunni groups, favoring them over the Syrian Kurds. “It may improve its prestige by allowing the Iraqi Kurdish peshmerga to cross into Syria to fight IS, but it will take time for Turkey’s overall image in the West, and especially among the Kurds, to improve,” he said.

Iskit maintained that Erdogan is not only driven ideologically by Sunni sectarianism, but also by enmity toward the Kurds, which he said is why he has been so reluctant to help Kurdish fighters in Kobani he sees as terrorists allied with the Assad regime.

“His abhorrence of the Kurds and his obsessive hatred for Assad have, however, come home to roost in Iraq and Syria,” Iskit said, pointing to the irony of Erdogan's situation.