Erdogan talks the talk but doesn't walk the walk

Turkey appears to have changed its mind on Syria, and Ankara is preparing to work closer with Washington against IS, which suggests it may be moving away from prioritizing the demise of the Assad regime. 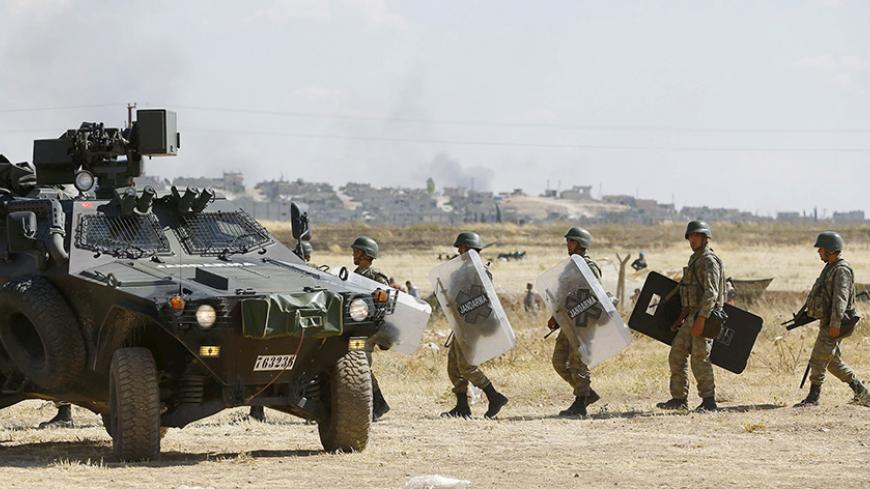 The chances of a military operation by Turkey to establish a buffer zone on the Syrian side of the border — with the primary aim of preventing Syrian Kurds from establishing an autonomous entity in the region — have receded as the political difficulties and security risks that would be involved dawn on Ankara. Meanwhile, the alliance between the United States and fighters attached to the Democratic Union Party (PYD), the main Kurdish group in Syria, has deepened Ankara’s quandary with regard to its overall Syrian policy.

Turkey’s continued beefing-up of its military presence along the Syrian border is seen by Western diplomats — who say they have been assured that unilateral action by Turkey is not on the cards — as “posturing” rather than as preparations to invade Syria.

Prime Minister Ahmet Davutoglu’s government — which lost its parliamentary majority after the June 7 elections, and is acting as caretaker until a coalition government can be formed — is reportedly considering new options that include talking to the PYD and cooperating more closely than has been the case with the US-led coalition against the Islamic State (IS).

All of this flies in the face of President Recep Tayyip Erdogan’s saber rattling after Kurdish fighters from the People's Protection Unit (YPG), the armed wing of the PYD, expelled IS from the northern Syrian town of Tell Abyad in June with US air support, and positioned themselves for further gains along Turkey’s border with Syria.

“We will never allow a state to be established in the north of Syria and in our south. Whatever the cost we will continue our struggle in this regard,” Erdogan said on June 26, a few days after accusing the US-led coalition of bombing Arabs and Turkmen in Tell Abyad and replacing them with Kurds attached to the PYD, and the Kurdistan Workers Party (PKK).

The PYD and its ally the PKK — which has been fighting for Kurdish autonomy in Turkey — are listed as terrorist groups by Ankara. Washington only considers the PKK a terrorist organization, but many in Turkey believe this designation has been watered down following the group’s contribution to the fight against IS.

Erdogan’s remarks resulted in domestic and international speculation suggesting that Turkey was preparing to invade Syria to establish a buffer zone 100 kilometers (62 miles) long, and 10 kilometers (6.2 miles) deep, to prevent the Kurds from gaining a contiguous region along its borders. Turkish military experts point to the difficulty of securing such a large area against multiple enemies, including starting with PYD, IS and the Syrian army.

As the tide continues to move against Ankara’s desires in Syria, influential Turkish voices have started to argue that the way for Turkey to extricate itself from this increasingly intractable situation is to open up channels of dialogue with the Syrian regime in order to ensure the country’s territorial integrity. To date, Erdogan and Davutoglu have been loath to do this, wanting a military defeat of the Syrian regime instead.

Former Chief of the General Staff Ilker Basbug is among those who say it's time to talk to Damascus. Basbug pointed out recently that a little section of Turkey’s border with Syria is under the control of the Syrian regime, while the remaining sections are under IS or PYD control.

“I think it would be better to seek a solution, within the bounds of international law, through normalizing ties with the central government, with the Syrian state, as soon as possible, and supporting the Syrian state,” Basbug told reporters recently while signing his book at a bookshop in the resort town of Bodrum.

Kemal Kilicdaroglu, the leader of the main opposition Republican People's Party (CHP), which is scheduled to start coalition talks with Davutoglu’s Justice and Development Party (AKP) soon, supported this view. “If we enter Syria we must prepare to pay a higher price than we have already. … The AKP government failed to read the international situation from the start, and that is why we are where we are,” Kilicdaroglu told the daily Hurriyet in a recent interview. “At least now they should lend an ear to the former chief of the general staff and not drag Turkey into an adventure,” he added.

Retired Brig. Gen. Naim Baburoglu did not mince his words, either. “Maintaining Syria’s territorial integrity is equal to maintaining Turkey’s territorial integrity, and this requires talking to the Syrian regime,” he told Al-Monitor. His remark reflects Turkish fears that an autonomous Kurdish entity in Syria which has direct links to the PKK would encourage Kurdish separatism in Turkey.

Baburoglu — who served in the UN Iraq-Kuwait Observation Mission after the forced Iraqi withdrawal from Kuwait in 1991 and now writes for online news portal Gercek Gundem — added that dialogue with Damascus could also be conducted through Russia or Iran, the Assad regime’s principal supporters. He said intervention in Syria by the Turkish military was not feasible, given the dangerously complicated situation there, and the risk of retaliatory PKK terrorism in Turkey.

Despite Erdogan’s declaration, his spokesman and principal foreign policy adviser Ibrahim Kalin told reporters at a news conference June 30 that Ankara was not preparing for any engagement in Syria.

“We said from the start we would act with the international community and the coalition, and not engage in any unilateral actions. All our initiatives with regard to a safe zone and a no-fly zone have been done according to this understanding,” Kalin said. He added that the military precautions along the border with Syria were necessary to protect Turkey against attacks.

Western diplomats in Ankara say Turkey painted itself into a corner in Syria and is now seeking a way out by leaning more to the US-led coalition and hoping to influence developments in this way.

“Turkey’s reluctance to prioritize the fight against IS over its desire to see Assad toppled, and the half-hearted way it worked with the international coalition against this group is the root cause of Ankara’s troubles,” a Western diplomat told Al-Monitor on condition of anonymity due to his sensitive position. “This forced Washington to work with the Syrian Kurds, and it is unlikely for the US to bow to any pressure from Ankara to distance itself from the PYD.”

Such signs emerged in a uniform leak to papers as diverse as the liberal Hurriyet and the pro-AKP and staunchly Islamist Yeni Akit, which cited a “senior official” and said Ankara had prepared a new “road map” for Syria. According to this road map, Ankara is preparing to work closer with Washington against IS, which suggests it may be moving away from prioritizing the demise of the Assad regime. It's also ready to talk to the PYD “provided it acts rationally and fulfills Turkey’s three conditions.”

These conditions are: allowing Arabs and Turkmens to return to Tell Abyad, the lowering of the PYD flag and refraining from ethnically based hierarchies in administrations established in areas captured by the Kurds. “The PYD made mistakes in the past but these can be corrected in order for it to become a rational actor in Syria,” according to the “senior official” cited by papers.

Having gained the upper hand against IS in a significant part of northern Syria, and secured a key alliance with the United States, some argue the PYD will not be pressed to meet these demands the way Turkey wants. If it is not, the question then is what can Turkey do if these conditions are not met? Because it lost the initiative in Syria due to a series of mistakes that it is trying to recover from now, the answer to this appears to be “not much.”

This adds urgency to the need for change in Turkey’s Syria policy if Ankara wants to break out of this impasse. The direction that Ankara moves in will depend very much on the outcome of talks for a new coalition expected to start any day now.