Analysts say Ankara may have no choice but to come to terms with the emerging Kurdish reality along its border with Syria. 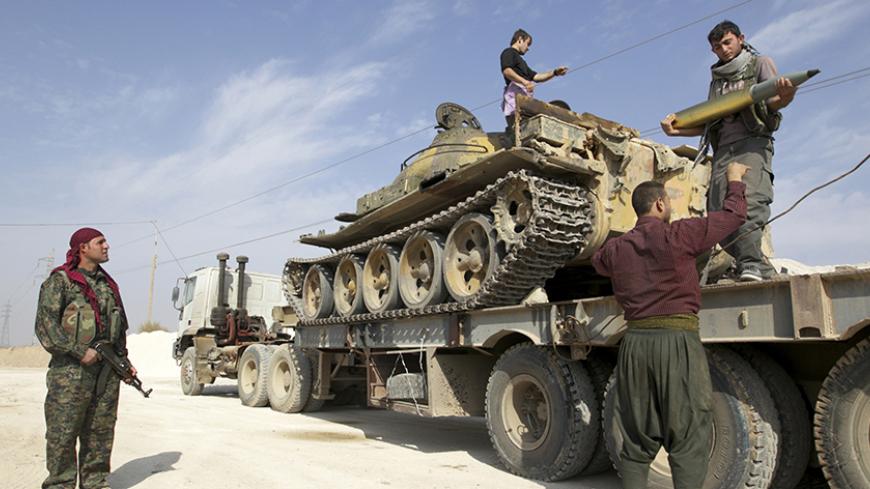 Members of the Kurdish People's Protection Units are seen on a military truck that belonged to the Islamist rebels after capturing it near Ras al-Ain, in the province of Hasakah, Nov. 6, 2013. - REUTERS

Turkey and the United States may have agreed on the use of the Incirlik Air Base near the southern city of Adana against the Islamic State in Syria, but the deal appears to have some snags, especially with regard to US assistance to Syrian Kurds fighting IS. This unresolved problem is considered one of the reasons why Incirlik has not been used yet in active operations by the US-led coalition, despite the urgency of the fight against IS and other groups such as Jabhat al-Nusra.

Pentagon spokesman Capt. Jeff Davis said earlier this week that armed drone missions were conducted out of the base last weekend, but added that none of the drones had launched airstrikes. Unarmed drones had already been flying out of the base. There are reports that the United States is delaying the use of manned aircraft from the base because it needs to set up search-and-rescue capabilities first.

But Ankara and Washington are in open disagreement over who the armed drones and manned aircraft in Incirlik will assist on the ground during the fight against IS. Ankara says the Incirlik deal does not cover support for the People's Protection Units (YPG), the armed wing of the Democratic Union Party (PYD), which has emerged as the umbrella organization of the Syrian Kurds. Ankara sees these groups as the Syrian extension of the separatist Kurdistan Workers Party (PKK), which is outlawed by Turkey as a terrorist organization.

The United States has also listed the PKK as a terrorist organization and concedes Turkey’s right to respond to attacks by the group, but has refused to bow to Turkish demands to outlaw the PYD and YPG as well. The PYD is currently allied with the United States against IS. PKK elements have also been fighting IS alongside the PYD, making the issue between Ankara and Washington more confusing.

Washington’s only concession to Turkey in this regard has been to refuse PYD leader Saleh Muslim a visa to the United States. Muslim and other PYD and YPG officials have, however, been welcomed by European countries that are part of the US-led coalition against IS, and there is a tangible increase in sympathy in the West for the Syrian Kurds, regardless of Turkish efforts to demonize them.

The YPG raised its profile considerably in Western eyes after its fighters captured the strategic town of Tell Abyad near the Turkish border in June with air support from US jets. Ankara looked on this development with concern, fearing a prelude to the establishment of an autonomous Kurdish zone along its border with Syria by groups allied with the PKK.

President Recep Tayyip Erdogan lashed out indirectly at the United States after the capture of Tell Abyad, claiming the West was striking Arabs and Turkmens in the town and settling PYD and PKK militants in their place. “How can we look on this positively? How can we consider the West to be honest?” Erdogan said, reflecting the anger felt in official Ankara circles.

A few days later, he said Turkey would never allow a Kurdish entity to be established in northern Syria. “Whatever the cost, we will continue our struggle in this regard,” he said angrily June 26. Disagreement on the topic of US assistance to the YPG surfaced again after State Department spokesman John Kirby told reporters in Washington on July 27 that the use of Incirlik would enable the US Air Force to assist YPG fighters on the ground more effectively.

Pointing out that the US-led coalition is already providing support to the YPG, Kirby said, “The fact that we now have access to bases in Turkey will allow for that support to be more timely and perhaps even more effective.” Kirby’s remarks, which were quickly picked up by the Turkish press, ruffled official feathers in Ankara. “The points indicated by Kirby do not reflect the agreement we arrived at [on Incirlik],” Ministry for Foreign Affairs spokesman Tanju Bilgic told reporters in a press briefing in Ankara.

Many analysts in Ankara believe Turkey is in a weak position here and will have to eventually find a formula to accommodate US support for Syrian Kurdish fighters if it does not want to come out the loser from this dispute. Retired Maj. Gen. Armagan Kuloglu told Al-Monitor that the deal arrived at with the United States is primarily based on combating IS.

“Turkey joined this fight to allay the impression that it has been assisting IS. But it is also using the argument about the need to fight all forms of terrorism in order to get support from Washington against the PKK,” Kuloglu said. “Washington has given this support, albeit somewhat reluctantly, saying, ‘You have a right to fight the PKK,’ but it has also indicated that the PYD is altogether another matter,” he added.

Kuloglu, who comments frequently on political and military matters, went on to say it was unrealistic to expect the United States to give up its support of the Syrian Kurds. He added that it was also not possible for Ankara to revoke its decision to allow Incirlik to be used against IS because of US support for the PYD, which he suggested is here to stay. Kuloglu said active and effective participation by Turkey in the US-led coalition against IS may provide Ankara some leverage over the PYD.

Many analysts, however, have been noting Turkey’s lame response to IS when compared with its disproportionate response to PKK attacks and have taken this as a sign that Turkey is still not prepared to go all-out against IS even though it has been targeted by the group.

“Ankara has to find a formula for this problem with Washington because if it doesn’t, it stands to lose more than the US, especially with regard to its operations against the PKK in northern Iraq,” Kuloglu said, arguing that Iraq is effectively under US control, giving Turkey a free hand to carry on with its strikes against the PKK there.

Kuloglu also believes that Ankara’s insistence on its position toward Incirlik and the PYD would have a price in terms of turning international public opinion against Turkey again, given that Syrian Kurds have gained the sympathy of the West.

This appeared to be corroborated by a piece in the Independent by Patrick Cockburn, who argued, “So far, [IS] has not done too badly out of Turkey’s ‘game-changing’ turn against it." He went on, “If US aircraft based at Incirlik are forbidden to attack [IS] fighters when they are battling either the Syrian Kurds or the Syrian army, the militants’ two main opponents on the ground, then they will be no worse off militarily than they were before.”

Kuloglu also indicated that reports of an agreement between Turkey and the United States for a safe zone in northern Syria had to be taken with a pinch of salt. Many in the West believe Turkey wants this zone to prevent the advances of the Kurds, although Ankara says it wants it to protect Syrian refugees against IS and the Syrian regime.

“Despite these reports, the US says it will not put boots on the ground to protect this zone. Turkey can’t do this on its own, and it is not possible to rely on the Turkmens there, as the recent fiasco relating to fighters trained and equipped and sent to Syria show,” he said.

He was referring to reports of the way the group — trained and equipped in Turkey by the United States, made up mostly of Turkmen fighters and acting under the name of Division 30 — was routed by Jabhat al-Nusra fighters as soon as it entered Syria.

Like Kuloglu, many Turkish analysts believe Washington is merely appeasing Turkey by going along with its calls for a safe zone. They argue that Washington's ultimate aim is to establish a friendly Kurdish zone in northern Syria, and suggest there is little Ankara can do to counter this without locking horns with its Western allies and finding itself alone in its fight against the PKK.