There is little Turkey can do at this stage to prevent Kurdish advances in northern Syria as they receive munitions to battle the Islamic State. 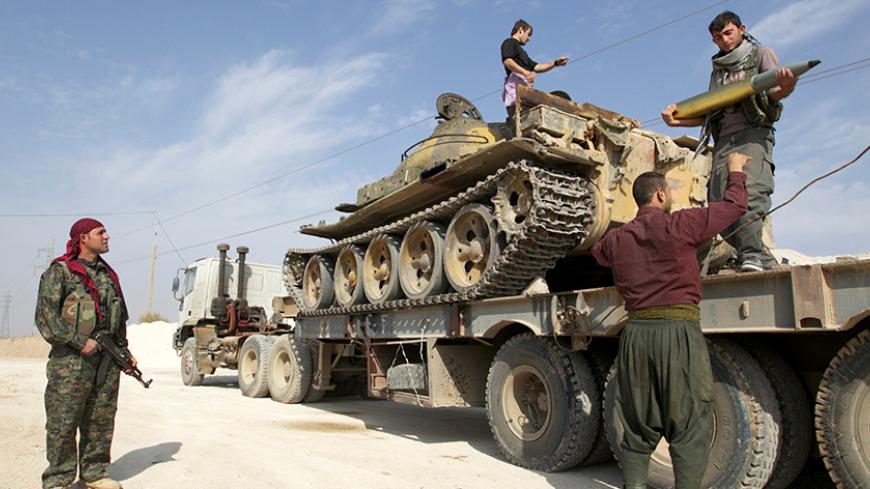 Members of the Kurdish People’s Protection Units are seen on a military truck that belonged to the Islamist rebels after capturing it near Ras al-Ain, in the province of Hasakah, Nov. 6, 2013. - REUTERS/Stringer

Turkey’s failed Syria policy has forged a double-edged problem for Ankara — with the United States on one edge and Russia on the other — that it is finding hard to overcome. At the heart of the matter lies the military assistance the United States is providing to the Democratic Union Party (PYD), the umbrella organization of the Syrian Kurds, to fight the Islamic State (IS).

Deepening Ankara's exasperation are reports that the PYD is successfully cozying up to Moscow and getting munitions from there. These developments come as the Turkish military is involved in an all-out war against the Kurdistan Workers Party (PKK) in Turkey and northern Iraq.

Turkey designates the PYD and its armed wing, the People’s Protection Units (YPG), as terrorist organizations because of their links to the PKK. Turkey wants its allies to do the same, but to date has failed to convince them. The YPG is currently considered an important military asset on the ground for the US-led coalition against IS.

Despite Turkey's pressure, the importance of the PYD and YPG has increased since the United States scrapped its failed program to train and equip moderate Syrian forces against IS.

Turkey was angered over recent reports that the US military airdropped 50 tons of munitions to the YPG. Turkey summoned John Bass, the US ambassador to Ankara, to the Foreign Ministry to provide an explanation.

An angry Prime Minister Ahmet Davutoglu also warned the United States that Turkey will target PYD assets if weapons provided to the group wind up being used by the PKK against Turkish targets.

“No one can convince us that the weapons provided to the PYD will not go to the PKK. If we establish that these are used in Iraq or in Turkey, then we will intervene the way we did against the PKK and destroy these weapons where they are found,” Davutoglu said during a meeting with reporters in Ankara.

State Department spokesman John Kirby told reporters during his Oct. 14 daily briefing in Washington that the United States understands Turkey’s concerns and is continuing to discuss them with Ankara.

He nevertheless reiterated that Washington “will continue to appropriately support those groups that are proving effective against [IS] inside Syria.” Pressed on the reported airdrop of munitions to the PYD, Kirby said the 100 bundles dropped had gone to Syrian Arab forces fighting IS.

PYD leader Salih Muslim also told Turkish media that the munitions were headed to groups fighting IS collectively. He added, however, that his group had also received its share and would continue to do so in the future.

“These weapons are just about enough for us here," Muslim said. "We are defending ourselves against [IS] with them. It is out of the question that they should go to the PKK or be used against Turkey."

Francis Ricciardone, a former US ambassador to Ankara, also weighed in on the topic to reassure Turkey with regard to the PYD. In an interview with the Hurriyet Daily News, he said the PYD has shown it is different from the PKK by declaring that it will not clash with Turkey.

“If the PYD cooperates with the PKK against Turkey and becomes a threat for the country, we would treat them the same way we do to the PKK,” said Ricciardone, who now acts as a deputy chief for the Atlantic Council, a Washington think tank.

Such reassurances ring hollow in Ankara, whose view of the PYD and YPG seems to be etched in stone. Amplifying Ankara's headaches are reports that Russia is also flirting with the Syrian Kurds and providing weapons to the PYD. Turkish suspicions about Russian intentions in Syria increased after Muslim visited Moscow in August to hold talks on coordinated action to combat IS.

Turkish officials were also annoyed by Muslim’s remarks in an interview with Al-Monitor’s Amberin Zaman in early October, in which he indicated that Moscow would prevent Turkey from intervening in northern Syria — not necessarily to support the Kurds, but to defend Syria’s borders.

Andrey Karlov, Russia’s ambassador to Ankara, was also summoned to the Foreign Ministry on the same day as Bass to be told of Turkish disquiet over reports of growing contacts between Moscow and the PYD. Russia, however, has also given no indication that it is prepared to toe Ankara’s line with regard to this group.

To the contrary, recent reports in Russian media maintain the PYD is about to launch a branch in Moscow.

The possibility that the PKK could end up with US or Russian munitions through the PYD is not Ankara's biggest worry. Turkey is much more concerned that Syrian Kurds will carve out a semi-independent or fully independent region for themselves in northern Syria along the Turkish border.

Turkey fears such a region would gain international legitimacy as a Kurdish enclave over time, the way northern Iraq did after the two Gulf wars. Ankara believes that would encourage separatism among its own restive Kurds. Many analysts agree, however, that Turkey has a limited capacity to prevent this, especially since Washington and Moscow ultimately seem to be on the same page about Syrian Kurds.

Retired Maj. Gen. Armagan Kuloglu said it is merely a matter of time before the Kurds carve out an autonomous enclave for themselves in northern Syria that will eventually become part of a federated Syria or, failing that, an independent region.

“There is agreement between the superpowers on this topic. Iran is also in on it. They want a friendly and unified Kurdish territory in northern Syria on both sides of the Euphrates for a number of reasons, including the fact that this will provide a new east-west link for oil to the Mediterranean,” Kuloglu told Al-Monitor.

“The only question for these superpowers today is whether this region will be friendly toward the United States or toward Russia. This is what the current struggle between them is all about,” he added, saying there is little Turkey can do to stop this.

Kuloglu went on to suggest that Turkey’s mistaken Syria policy from the very start was the root cause of the problem. “Put in military jargon, if your strategy was wrong to begin with, and all your energies and capabilities misdirected, there is little in terms of tactical steps you can take to correct the situation later,” he said.

He also appeared skeptical about Davutoglu’s warning that Turkey will act against the PYD if the group passes US-supplied weapons to the PKK. “This warning only carries weight if he can stand behind it,” Kuloglu said. Realistically, the current political environment does not allow for such operations, he added.

“The simple fact is that Turkey has lost this battle, and there is little it can do to alter this."