Unless Turkey changes priorities, it will be more vulnerable to Islamic State attacks. 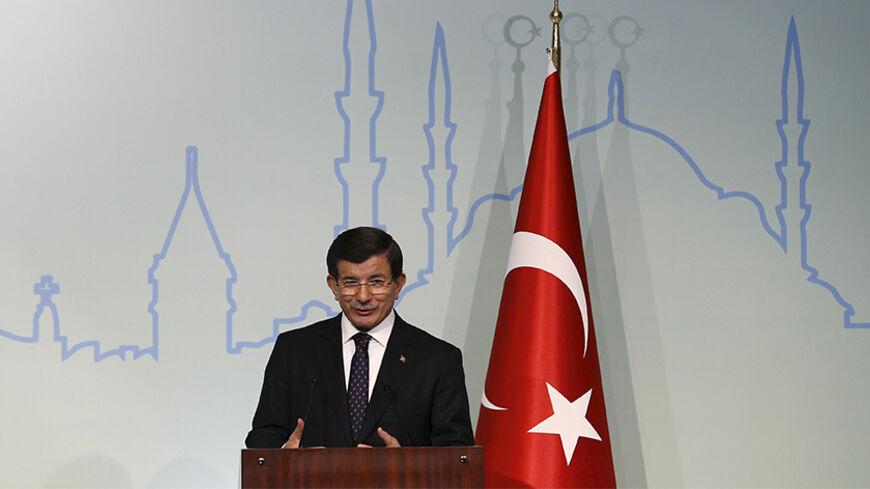 Turkish Prime Minister Ahmet Davutoglu speaks during a news conference in Istanbul, stating that both the Islamic State and the Kurdish militant group PKK may have played a role in the twin Ankara bombings Oct. 10 that killed around 100 people, Oct. 14, 2015. - REUTERS/Murad Sezer

Turkish Prime Minister Ahmet Davutoglu was believed to have charmed his international audience while he served as the foreign minister under Recep Tayyip Erdogan’s leadership from 2009 to 2014. His image was that of an impressive academic with original ideas on international affairs to which he introduced insightful analyses. But Davutoglu, since the time he was handpicked by Erdogan to occupy the post Erdogan would vacate to climb up to the presidency, has increasingly become the object of criticism, sometimes harshly personal, even contesting his intellectual credentials.

It was not long ago that he was depicted as being no more than a Turkish notable of the Arab Muslim Brotherhood network. “Zero Problems with Neighbors,” the phrase he coined to symbolize Turkey’s allegedly successful re-entry into the Middle East policy arena, is now no more than a distant reference, as Turkey’s regional posture nowadays is in shambles.

With the dominant personality of Erdogan overshadowing Davutoglu, many observers in and outside of Turkey ceased to take him seriously as his title “the prime minister” would deserve and as he would like. Yet, the way he performed in the wake of the deadliest terror attack Turkey has ever seen, in which two suicide bombers apparently belonging to the Islamic State (IS) killed around 100 people Oct. 17 in the capital, Ankara, brought Davutoglu once again under the spotlights of domestic and international politics.

But again, he failed to impress anybody. He simultaneously became an object of derision and amusement. On Oct. 14, in an attempt to draw a demarcation line between Daesh (he uses the Arabic acronym of IS following the footsteps of his boss, Erdogan) and Turkey's Justice and Development Party (AKP), he said, “There is a 360 degree difference” between the Islam of Daesh and the Islam of the AKP, of which he is the chairman.

The respected and influential Turkish online site Diken (Thorn) carried the headline “Davutoglu’s head turned off”! It quoted Davutoglu as saying, “The difference between the Islam that is in their minds [IS] and the Islam that we advocate is not 180 degrees, it is 360 degrees.” Diken sarcastically commented that Davutoglu had erred in his math calculation.

And that was only the last link in a chain of blunders Davutoglu had that day. Earlier on Oct. 14, at a news conference, he had suggested that the Kurdistan Workers Party (PKK), alongside IS, may have played a major role in Turkey’s worst terrorist attack.

The moment he made this allegation, IS not only still was the main suspect, but reporters had found who the second suicide bomber was. The first suicide bomber had already been identified as an IS operative. Key information came from Idris Emen, a young reporter who discovered the eastern town of Adiyaman as one of the sources of IS recruits in Turkey and had extensively reported about the community for the Radikal daily all the way back on Sept. 29, 2013, under the headline “Adiyaman: The jihadist route to Syria.” The names he reported then became the perpetrators of IS suicide attacks at Diyarbakir on June 5, at Suruc on July 19 and at Ankara on Oct. 10. In the wake of the Ankara bombing, Emen spoke, in Adiyaman, to the father of the second suicide bomber in the Ankara attack. Although the man had informed security officials about his son’s IS involvement, no precautionary measures were taken.

Another event showing how the fury of the government toward Kurds is apparently greater than its anger against IS was when the US ambassador in Ankara, John Bass, was summoned to the Foreign Ministry on Oct. 13 so that Turkey could again register its displeasure over the growing ties between the United States and the Kurdish Democratic Union Party (PYD) and the People's Protection Units (YPG) fighting against IS in northern Syria.

Davutoglu — also on Oct. 14 — said that armed Kurds in Syria (meaning the YPG, which Turkey claims to be the Syrian branch of the PKK) could cooperate with the Kurdish militants battling security forces inside Turkey. “No one can guarantee that arms given to the YPG won’t tomorrow fall into the hands of the PKK and be used against Turkey,” he said. (It should be noted that the PKK has declared a unilateral cease-fire until the Turkish election Nov. 1.)

While it is true that it is almost impossible to place a wedge between the YPG fighters — who with US support are fighting against IS in Syria — and Kurdish militants battling Turkish security forces in Turkey, it is not realistic to think that Washington would refrain from helping the Kurds and their Arab allies in their fight against IS in northern Syria, particularly after the heavy Russian military involvement in the Syrian conflict. Even back in July, Defense Secretary Ashton Carter acknowledged that the YPG is a “capable” and “effective” force in the fight against IS in Syria.

Davutoglu or the Turkish government not only is challenging US plans to aid Syrian Kurdish fighters battling IS in Syria, but is challenging Russia, too. Turkey also summoned the Russian ambassador in Ankara to the Foreign Ministry and voiced its concerns that Russia, too, was helping the Kurds.

Yes, they were. They are. And they will. It is, perhaps, one of the rare areas in the Syrian conflict that Washington and Moscow’s interest converge: to support the Kurds against the IS.

Reports have emerged in recent days that Russian officials have met with Salih Muslim, the leader of the PYD, whose armed wing is the YPG. Russia has historic ties to the group stretching back to Soviet days.

Muslim also confirmed that the PYD has recently received weapons airdropped by US forces to the region under its control, telling the PKK news agency ANF that “a total of 50 tons of ammunition was airdropped for us and the groups we are in alliance with. This is just the beginning; more weapons are to be sent.”

Stressing that Davutoglu had better abandon futile threats, Muslim said, “These weapons have been given not only to us but also to the Arab groups we act together with.”

Questioned whether the PYD and Turkey had had any contacts recently, Muslim asked, “How can we ever have talks with those who call us ‘terrorist’ every day?”

The issue was brought up Oct. 14 at the State Department daily press briefing. The following words of spokesman John Kirby explains that Washington will not refrain in cooperating with the Kurds in Syria against IS, despite the diplomatic demarches of Ankara:

“I think it’s just important to remember, getting — and I understand the sensitivity on this — the focus in Syria for the United States and the other 60-plus members of the coalition is about counter-[IS]. And we will continue to appropriately support those groups that are proving effective against [IS] inside Syria.”

Everything boils down to Ankara’s unchanged priorities under Erdogan and Davutoglu. In the current threat perception of the AKP leadership, Kurds — in Turkey and Syria — constitute the main danger for Turkey. This could be read as the Kurds being perceived as the main challenge to the ambitions of Erdogan, who aspires to transform Turkey's presidency into a powerful executive, and to the AKP, which could be deprived of a single-party majority government forever.

As Kurds are envisaged by Erdogan and Davutoglu as the AKP's main political challenge and the Kurds' armed insurgent organization, the PKK, is seen as the main source of violence that could rock the AKP’s foundations in Turkey, the president and prime minister will not be focusing on IS as the true danger.

Thus, IS will have relatively ease of operation across ever-deepening fault lines between the government of Turkey and its increasingly unruly and discriminated-against Kurdish populace.

The imminent result of this ostensible vicious circle will be expanding the fight between the Kurds and IS into Turkey. That means further destabilization of Turkey; in other words, the beginnings of Turkey’s “Syrianization.”

Whether the current political elite in Turkey can survive long and escape the tide remains to be seen. What is certain is that under its current leadership, the country is more vulnerable to IS operations in the short term unless it radically changes its political priorities.

Two weeks ahead of elections, it is not clear that they are prepared to do it. The disarray in the government and between its key leaders is more pronounced than ever.