Are we witnessing ‘Syrianization’ of Turkey? 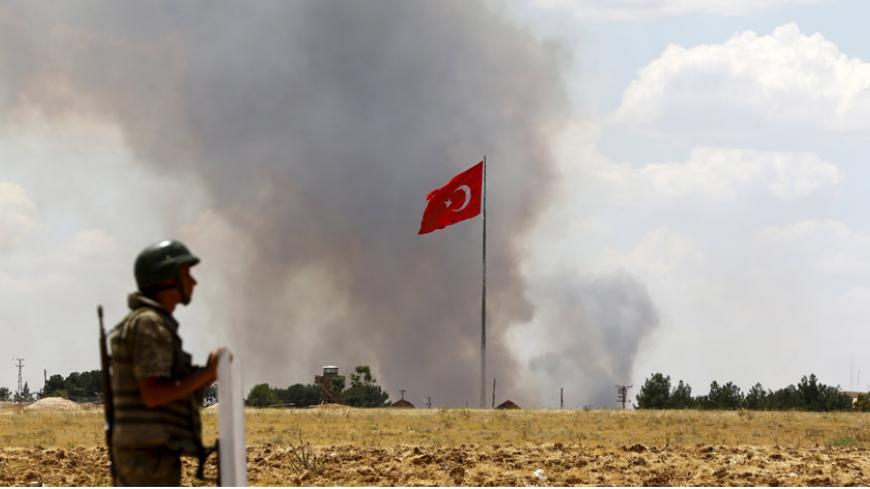 A Turkish soldier stands guard while smoke rises in the Syrian town of Kobani as it is seen from the Turkish border town of Suruc in Sanliurfa province, Turkey, June 26, 2015. - REUTERS/Murad Sezer

US, Turkish divisions on Syria greater than ever

Fehim Tastekin reports that the charge made by Turkish Prime Minister Ahmet Davutoglu on Oct. 14 that the Kurdistan Workers Party (PKK) may have collaborated with the Islamic State (IS) in the terrorist bombings in Ankara four days earlier “is being whispered persistently into the ears of journalists and opinion-makers. An extraordinary effort appears to be underway to lead the public by the nose rather than to shed light on the attack.”

Cengiz Candar writes, "The moment he [Davutoglu] made this allegation, IS not only still was the main suspect, but reporters had found who the second suicide bomber was. The first suicide bomber had already been identified as an IS operative. Key information came from Idris Emen, a young reporter who discovered the eastern town of Adiyaman as one of the sources of IS recruits in Turkey and had extensively reported about the community for the Radikal daily all the way back on Sept. 29, 2013, under the headline 'Adiyaman: The jihadist route to Syria.' The names he reported then became the perpetrators of IS suicide attacks at Diyarbakir on June 5, at Suruc on July 19 and at Ankara on Oct. 10. In the wake of the Ankara bombing, Emen spoke, in Adiyaman, to the father of the second suicide bomber in the Ankara attack. Although the man had informed security officials about his son’s IS involvement, no precautionary measures were taken. When all these reports were widely circulated, the government declared a ban on any reporting on the Ankara bombing while the investigation was underway.”

Turkish President Recep Tayyip Erdogan said Oct. 14, “For Turkey, there is no difference between the PKK, its extension PYD [Democratic Union Party of Syria] or [IS]. … They are all terrorist organizations with bloody hands.”

Candar concludes, “The imminent result of this ostensible vicious circle will be expanding the fight between the Kurds and IS into Turkey. That means further destabilization of Turkey; in other words, the beginnings of Turkey’s 'Syrianization.'”

Erdogan’s charge complicates US policy toward Syria. The United States does not consider the PYD a terrorist group. To the contrary, the PYD is now among Washington’s preferred partners in Syria. Erdogan’s linking the PYD with IS can’t but clash with US strategy, including speculation over a no-fly or "safe" zone in northern Syria. US Secretary of State John Kerry reportedly raised the idea again this month, and former Secretary of State Hillary Clinton endorsed a coalition-enforced safe zone in the Democratic presidential debate Oct. 13.

US Secretary of Defense Ashton Carter said in May that a no-fly zone would be a “major combat mission” and "difficult to contemplate."

"Difficult to contemplate" may be an understatement, especially if Turkey considers the US-allied PYD a terrorist enemy.

Asaad Hanna explains how the expatriate Syrian opposition groups have sought to bridge the gap with armed resistance groups operating in Syria by rejecting the latest peace effort of UN special envoy Staffan de Mistura. Hanna writes, “After becoming closer to the factions, the political opposition now hopes to obtain public support and restore its legitimacy, a big part of which it lost in the Syrian street. Perhaps it can count on that support more than that of the foreign countries that used to support it, and then abandoned it. The political experience of the military factions and the coalition is now being put to the test by the diplomatic forces, especially since the Russian intervention in Syria in early October, which led to ongoing negotiations between international parties that will include the opposition formations.”

The bottom line for the United States, already reeling from the failed "train-and-equip" mission, may be that the usually fragmented Syrian opposition found a way to rally around opposition to UN-brokered peace talks rather than more intensive coordination against IS.

Did Netanyahu ignore warning of an intifada?

Ben Caspit reports that “the explosiveness of the Temple Mount issue and whether the next intifada will result from it have been covered by Al-Monitor. There is also more: After the meeting between Zionist Camp leader Isaac Herzog and Palestinian President Mahmoud Abbas on Aug. 18 in Ramallah, an Al-Monitor article cited a warning issued in the form of a concern by the Palestinian leader to the Israeli opposition head: Abbas feared a third intifada and losing control over PA territory. Herzog delivered this message not only to Al-Monitor, but also to Netanyahu, who did not respond. Now he’s probably sorry."

Caspit adds, “Until the Israeli government takes crystal clear action, such as closing the Temple Mount to Jews for a cooling-off period, there is no chance that the Palestinians' state of mind will change. If it doesn't change, this peculiar intifada will continue.”

Daoud Kuttab blames the absence of a peace process as the cause of the latest violence. He writes, “A political process that addresses the national issues of Jerusalem’s Palestinians and reaches permanent understandings of the administration of the holy sites is crucially necessary. The absence of a serious process that empowers Jerusalemites and addresses their needs will cause uncertainty and anger to continue irrespective of a calm that might be established for a month, a year or a decade.”

Akiva Eldar writes that responsibility ultimately rests with the Israeli prime minister: “Netanyahu's instruction to right-wing ministers to refrain from visiting the Temple Mount is like giving expired aspirin to a patient with metastasized cancer. To prevent the violence plaguing Israel from becoming a fatal disease, we must take steps that are appropriate to the extent of the danger. When the Arab sector is burning and Jerusalem is deteriorating, talk is not enough, especially when the speaker is Netanyahu. It is time to dust off the Or Commission Report, which dealt with the events of October 2000, when 13 Arab demonstrators were killed, and immediately implement its recommendations for closing the wide gaps between Jewish and neighboring Arab municipalities in the fields of education, health, infrastructure and policing. First and foremost, the police’s fatally trigger-happy tendencies toward Arab citizens must be addressed. (Since the second intifada, when 13 Arab citizens were killed, police have killed 51 Arab citizens, compared with two Jewish citizens.)”

Ahmad Melhem reports from the West Bank that Israeli actions in response to Palestinian violence may violate the Geneva Convention.