How the IDF goes undercover among Palestinians

The mistaravim, Israeli soldiers disguised as Palestinians, are known for infiltrating demonstrations. 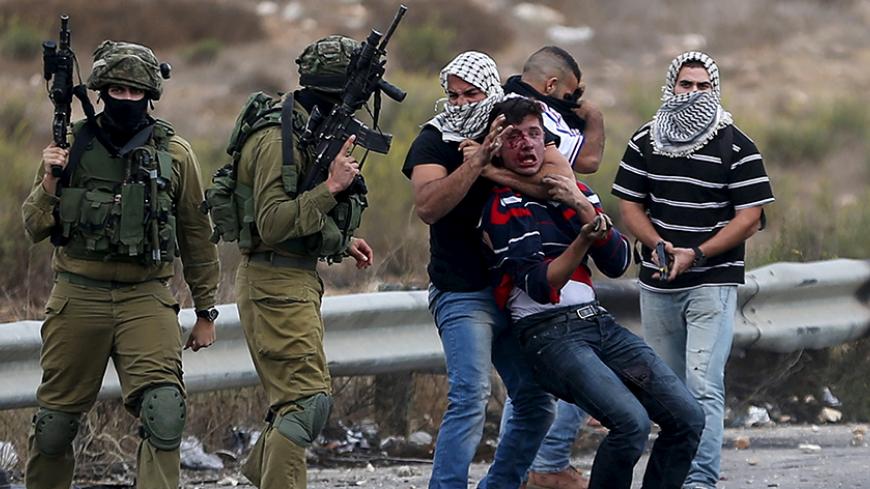 Undercover Israeli security personnel (R) and Israeli soldiers detain a wounded Palestinian protester during clashes near the Jewish settlement of Bet El, near the West Bank city of Ramallah, Oct. 7, 2015.

During the recent Israeli-Palestinian confrontations in the West Bank and Jerusalem, media outlets have filmed what appear to be armed civilians arresting and handing Palestinian demonstrators over to the Israel Defense Forces. These men, called mistaravim, wear Arab clothing to look like Palestinians as they carry out undercover missions against and sometimes kill Palestinians wanted by the IDF.

The mistaravim are increasingly intervening at the entrances to Palestinian cities and near Israeli settlements, points of friction between both sides.

On Oct. 7, the mistaravim could be clearly seen in confrontations between the IDF and Birzeit University students, and again at demonstrations near the Beit El settlement in northern Ramallah.

Although there are no reliable estimates available, Ghassan Da’ar’s book "Mistaravim: Israeli Death Squads" (2005) estimated the mistaravim killed 422 Palestinians between 1988 and 2004.

Imad Hussein, a leading figure in the West Bank demonstrations, told Al-Monitor, “The mistaravim turn from civilian Palestinians into Israeli soldiers carrying small pistols within seconds. After capturing the demonstrators they want, they put on hats with ‘police’ written in Hebrew. During the recent demonstrations, while the youth were throwing stones at the soldiers, they were shocked to see several masked men shooting at them. Those turned out to be mistaravim.”

Palestinians accumulated important information about the mistaravim during the first and second intifadas. Mistaravim speak Arabic fluently. They are hard to identify in the masses during the clashes, since people cover their faces with scarves or shirts, for fear of being captured by IDF cameras and subsequently arrested.

Photojournalist Ibrahim Jumaa told Al-Monitor, "The mistaravim work undercover among Palestinians. They encourage them to throw stones, advance and attack the soldiers. They also provide the demonstrators with drinking water, and then, all of a sudden, they attack them. I have seen them more than once pointing a gun at the demonstrators near the Qalandia checkpoint in the outskirts of Jerusalem, and in Ofer near Ramallah, and shooting them a few seconds before the soldiers arrive.”

Al-Monitor met with Abdul Hadi, a pseudonym for a Palestinian who was arrested recently by the mistaravim. "While I was among the demonstrators on the outskirts of Jerusalem, six armed men in civilian clothes and having Arab features attacked us. We learned later on that they were among us for more than an hour, until it was time to capture three youths. I survived, miraculously, along with two others, after the demonstrators continued to throw stones at the mistaravim," he said.

The mistaravim undergo intensive training that is different from that of ordinary Israeli soldiers. They learn to master the Palestinian dialect and customs. Sometimes they disguise themselves as elderly Palestinians or street vendors.

Calm usually precedes their entry at demonstrations. The soldiers withdraw a bit and the tear gas and rubber bullets pause. The mistaravim subtly surround the demonstrators in cooperation with the army, and when the soldiers advance again in the front, the mistaravim wait in the back for the retreating demonstrators.

Maha al-Husseini, spokeswoman for Euro-Med, expressed to Al-Monitor “serious concern about the Israeli army’s extended utilization of the mistaravim in the ongoing confrontations in the Palestinian territories."

Husseini said, "This is because their operation is illegal and violates the principle of distinction between civilians and combatants, which is prohibited under international humanitarian law, because the Israeli soldiers’ disguise in civilian clothes would endanger the civilians. Moreover, the mistaravim’s mission is to collect information, carry out killings and kidnappings or disperse demonstrators.

"The way they arrest Palestinians is very violent and is considered a deception, and the detainee suffers brutal and unjustified beating.”

The mistaravim pose a real challenge to the continuation of Palestinian demonstrations in the West Bank. They are arresting the best and most active demonstrators and sowing suspicion and mistrust among Palestinian youths, allowing the IDF to kill several birds with one stone.