Tensions have escalated along the border between the Gaza Strip and Israel, as Gazans head there daily to throw stones at Israeli soldiers, in parallel with the uprising in the West Bank and Jerusalem. 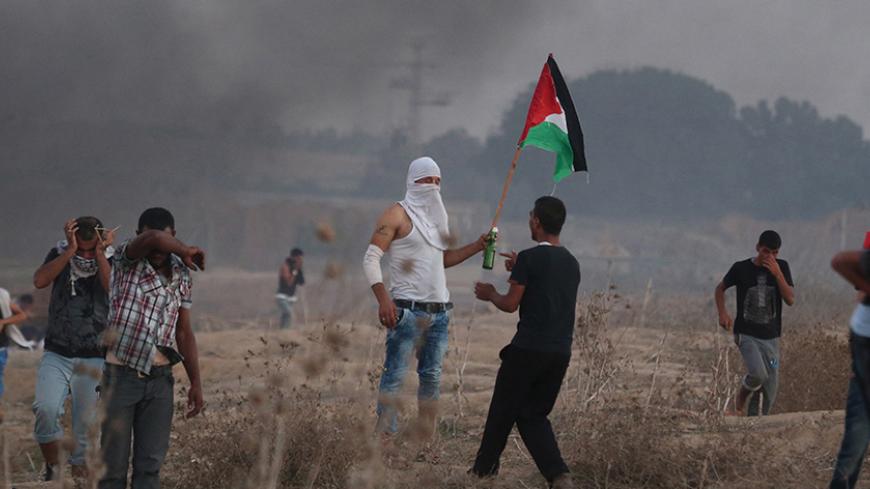 A Palestinian protester holds a Palestinian flag during clashes with Israeli troops near the border between Israel and the Gaza Strip, Oct. 15, 2015. - REUTERS/Ibraheem Abu Mustafa

BEIT HANOUN, Gaza Strip — Clashes have suddenly erupted along the southern, eastern and northern borders of the Gaza Strip. This has raised concerns that Gaza will never experience stability.

Palestinian youths have insisted on reaching the iron fence separating the Gaza Strip from the Green Line from the eastern Bureij refugee camp. On Oct. 10, and the days that followed, they managed to cross the fence and hang the Palestinian flag.

For the first time in years, demonstrators managed to cross the border; after Israel withdrew from Gaza in 2005, it imposed a buffer zone of between 600 and 1,000 meters (1,968 to 3,280 feet) at the border. Although the political truce between Israel and Hamas after the 2012 war stipulated that this zone be reduced, Israel did not commit to it.

While preparing a Molotov cocktail, Ali, 27, told Al-Monitor, “We raised the flag, but they [Israeli soldiers] removed it. We raised it again, and they unleashed the dogs on us; we threw big stones at them.”

Ali, who was wearing the keffiyeh, added, “They killed all of my friends in the previous wars. I am the only one who survived. I want to follow my friends into death. I've lost hope in everything, in Abu Mazen [Palestinian President Mahmoud Abbas], the reconciliation and [political] parties.”

Bilal, Ali’s friend, is totally different. He is searching for life. Bilal, 21, said, “We want to live freely. We want to tell our brethren in the West Bank and Jerusalem we are resisting with you.”

Ali filled the bottle with gasoline and placed a piece of fabric on the bottle's neck. Bilal, whose right foot was amputated in a car accident, could not help Ali; Bilal was standing up using his crutches.

Ali was done. Bilal walked by his side on the long and narrow sandy road that leads to the vast hills facing the border.

Other people started to rally following Friday prayer on Oct. 16, which was declared “a day of rage” by Palestinian groups such as the Islamic Jihad.

The road quickly filled with hundreds of youths, where people in their 30s and 40s were rare, except for journalists.

While they were advancing, some were holding slingshots, and others Molotov cocktails. Many carried marbles, while the majority had onions used to mitigate the effects of tear gas.

Ibn Filasteen (a pseudonym) told Al-Monitor, “I am taking part in the demonstrations at the border while holding a slingshot, which is made of rubber and a rope. So far, I've never hit any Israeli soldier.”

Enthusiasm and readiness seemed to hold sway in the area. The young crowd quickly filled the sand hills. Those who were more daring advanced toward the iron fence. Some set tires on fire. Wael, 16, said, “The black smoke blocks people's views, and therefore we will be able to sneak up to the fence without being seen by the soldiers.”

Ezz al-Din, 10, wanted to take part in the rally, but his uncle told him to leave. His uncle told Al-Monitor, “It has been two months since he arrived from the UAE. He is insane; he could have been killed here.” The child seemed angry and frustrated on his way back.

The clashes started Oct. 9, in response to the popular uprising in the West Bank and Jerusalem. In Gaza, at least 15 people have been killed since the start of the incidents as a result of Israeli shelling; the dead include a mother and her daughter.

The masses stood facing the military vehicles that were parked behind the fence. Ibrahim, 23, told Al-Monitor, “I want to reach them, and capture a soldier for the sake of Jerusalem and Jerusalemites, and to lift the blockade on Gaza.”

They all hide their names and faces in case there are cameras, and as they approached the fence. These are the rules of engagement they abide by without prior arrangement.

A few moments later, tear gas was fired in every direction. It was hard to anticipate where the gas would hit. The gas produced a feeling of suffocation and burning. Those gathered all passed around the onions to smell.

One youth, with tears covering his red face, shouted, “It is a poisonous gas.” Another replied, “Breathe regularly. Its effect will go away in a few minutes.” Those who could not bear it passed out.

Once someone passes out, the young people gather around him, carry him away and call an ambulance. The paramedics will try to treat him on the ground. If he does not wake up, they will take him to the nearest hospital.

Paramedic Abu Ahmed told Al-Monitor, “More than 20 ambulances and hundreds of female and male volunteers and paramedics have been present on the hot border since Friday [Oct. 9].”

The situation is getting more and more dangerous. Demonstrators on the border repeated that people were shot with live ammunition. The journalists, including Al-Monitor’s correspondent, left the area and headed to the far north, to the Beit Hanoun (Erez) crossing.

The youths entered the second Palestinian gate at the Beit Hanoun crossing, and the 1,000-meter-long street was filled with youths, children, women and paramedics. It was the first time that most of them had entered the area, which is restricted for everyone except travelers and the crossing facility's staff.

The clashes seemed unfair. The soldiers were protecting themselves behind a huge concrete wall, while the demonstrators were standing within firing range. Mahmoud, 21, told Al-Monitor, “A while ago, a youth was killed by an Israeli sniper, and many others were injured,” in reference to Yahya Farhat, 24, whose death was announced Oct. 16 by the Health Ministry.

Some came out of curiosity to watch how things were going. Nour, 35, told Al-Monitor, “I can understand why we are throwing stones at the Israeli soldiers in the West Bank, [as] both parties are facing each other. But, the snipers here are targeting the youths from behind the concrete [wall].”

All of a sudden, the demonstrators started running to escape tear gas, in a human wave. Periodically, one of the youths would throw back a tear gas canister toward the Israeli soldiers or cover it, and then start running back toward the soldiers. Hours passed as the demonstrators ran back and forth.

Ironically, the crossing is still operating. Some of the travelers stepped out of the small golf cart used to cross narrow lanes at the crossing at the gate in order to take the buses and move away from the clashes.

Umm Khaled Abu Samhadana, a 66-year-old traveler from Jerusalem, told Al-Monitor, “It was a nice trip [from Jerusalem]. When we approached Gaza, we heard that there are clashes at the border crossing, which raised our concern.”

Most of the youths carried small radios, or used their cellphones to follow the news. As soon as the death of a Palestinian or an Israeli soldier is announced, they scream the news.

Youssef, 22, told Al-Monitor, “The youths are coming from different classes and affiliations. Jerusalem is in our hearts. We will not stand idly in the face of Israel.”

The youths are experiencing overgrown crises in Gaza. The blockade has intensified, and it has been months since the Rafah border crossing was closed. Moreover, the reconciliation and reconstruction process has been delayed, and unemployment has reached 43.9%, the highest rate in the world, according to the United Nations Relief and Works Agency for Palestine Refugees in the Near East.

Umm al-Abed, 45, was looking for her four children in the crowd at the border crossing. She only found Malak, 9. Umm al-Abed took Malak's hand and told Al-Monitor, “She wants to throw stones, she is risking her life.” Malak seemed angry and quickly let go of her mother’s hand and returned to where the clashes were taking place.

When Al-Monitor’s correspondent left the site, Umm al-Abed was still looking for her other children.

The same scene persisted on our way back from Bureij. Ezz al-Din was hiding behind crowds heading toward the location of the clashes.

This generation, which did not witness the first intifada, is creating its own uprising.