Women are joining the protests against Israeli soldiers on the eastern border of Gaza City. 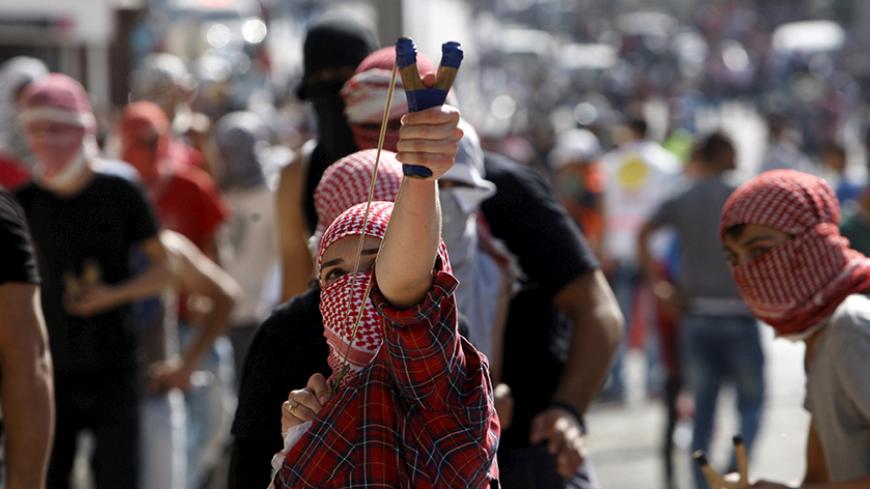 A Palestinian girl uses a slingshot to throw stones at Israeli troops during clashes in the West Bank city of Bethlehem, Oct. 14, 2015. - REUTERS/Mussa Qawasma

Abu Qenas and Abdul Qadir were not thinking of the criticism that their action may stir in society, as two women among an otherwise all-male protest. They do not think of the act of throwing stones as restricted to men.

Abu Qenas told Al-Monitor, “I couldn’t stand to stay at home watching young men and women in the West Bank facing Israeli soldiers with their bare chests, and I couldn’t tolerate the desecration of Al-Aqsa Mosque. I came here without thinking of criticism. In fact, I don’t care.”

She added, “I participated in the protest on Friday and Saturday [Oct. 9-10], and the number of female participants was higher on the second day. There was no discrimination between men and women. The confrontation imposed its own rules.”

On Oct. 10, Abu Qenas lost her sight for about 25 minutes when she was hit by a tear gas canister that Israeli soldiers threw at her face. She was treated by Palestinian emergency responders on site and soon headed back to the confrontation. She said that she stood only a few meters away from Israeli soldiers behind the fence.

Women in Gaza started throwing stones on the eastern border after images of women doing the same in the West Bank cities went viral over social media and local television channels. Female participation in both the Gaza Strip and the West Bank protests was not just for show, but genuine.

The confrontations with Israel in the cities of the West Bank and Jerusalem come as a firm response to President Mahmoud Abbas’ speech before the UN General Assembly on Sept. 30, when he declared, “We cannot continue to be bound by these agreements. … We will start the implementation of this declaration by all peaceful and legal means.”

Ramallah-based journalist Mohammed Daraghmeh told Al-Monitor, “Although women’s participation in the popular uprising against Israel is not universal, it is widespread in Ramallah, which is a relatively liberal city. Women from Bethlehem are also participating, while in Nablus, their participation is less, due to the city’s conservative nature.”

Daraghmeh added, “Women’s participation is not just for show. During the last few days, I interviewed dozens of women and young men and I noticed that each of them can recall a series of incidents caused by Israeli racism. Students come to their universities in Ramallah from far and scattered villages and stand at checkpoints for hours as they watch hundreds of settlers moving freely. They can no longer tolerate this. Their movement is real and strong.”

Abdul Qadir tried to look masculine as she headed to throw stones at the eastern border of Gaza. She put on khaki trousers, similar to the military outfit, and covered her face with a headscarf. However, her femininity showed in her eyes, which she had smudged with black liner, and the veil she wore on her head.

She said, “I should be ashamed to wear pants and throw stones, but I never gave this a second thought. I am here because of my beliefs and convictions to confront Israel.”

According to a study conducted by researcher Amin al-Assi in 2009, political participation by Palestinian women dates back to 1893, during a rally organized in the city of Afula in protest against the establishment of the first settlement.

Today, Afula is making headlines after the Oct. 9 spread of video footage of Israeli soldiers surrounding and shooting Asraa Abed, a Palestinian woman, on suspicion of carrying out a stabbing operation in a bus station in Afula in the 1948 territories. The video had a strong impact on Palestinian women.

Latifa Shetat, 22, told Al-Monitor that she participated in the Oct. 9 protests on the eastern Gaza border of her own initiative. But after watching the video of Abed being shot at by soldiers, she decided to take part in the protests the next day in an organized manner with her friends, and more than 10 girls headed together to the confrontation lines.

Shetat said, “We were around 13 students from various factions. We were too enthusiastic and determined, to the extent that when the taxi driver tried to change our minds we argued with him and stressed the importance of our participation to support the male and female youth of the West Bank. The taxi driver ended up coming with us to the border and taking part in the protest.”

She added, “My mother was very worried and tried to change my mind. I asked her, ‘Didn’t you participate in the first intifada? Why do you want to deny me the same experience?’”

According to a study of female participation in politics by researcher Ghassan al-Shami in 2012, women participated in the first intifada that started in 1987 and ended in 1993 in a number of ways, including participating in protests and confrontations against Israeli soldiers, writing and distributing military publications, monitoring the movement of troops, training in weapons and direct action, delivering messages to fighters, harboring fugitives and participating in military operations. It should be noted that 80 women were killed in the first intifada.

For her part, Mariam Abu Dakka, a member of the Popular Front for the Liberation of Palestine’s political bureau who participated in military actions during the 1960s, believes the contribution of women to the current uprising is still lacking. She explained to Al-Monitor that this is not the fault of the women themselves; rather, it can be attributed to a general decline in revolutionary momentum and popular armed action.

She added, “The circumstances of the struggle and the perception of women have changed. Currently, society generally judges women involved in confrontations on the ground negatively, despite the existence of strong female leaders capable of real instead of supporting participation.”

Daraghmeh confirmed that women’s participation in the confrontations against Israeli soldiers has increased their self-confidence. “Women were weak and vulnerable in large gatherings, especially at military checkpoints. But now, after their participation in the popular uprising, I feel their self-confidence has increased and they are clearly proud of themselves,” he said.

He explained that the generation leading what he called the current intifada feels a great deal of despair, frustration and societal pressures, particularly women, urging them to seize the opportunity to strongly express themselves. Daraghmeh noted that an overwhelming sense of nationalism is now pushing each man and woman to participate in the confrontations without consideration of their usual societal roles.

Although seven people were killed and dozens wounded in the clashes on Oct. 9-10, Abu Qenas, Abdul Qadir and Shetat are planning to take to the streets again, confront Israeli soldiers and lead the stone-throwers.