Women at the front lines of Gaza protests

Palestinian women are going to the front lines of Gaza's border demonstrations, cooking for protesters and holding several activities near the border. 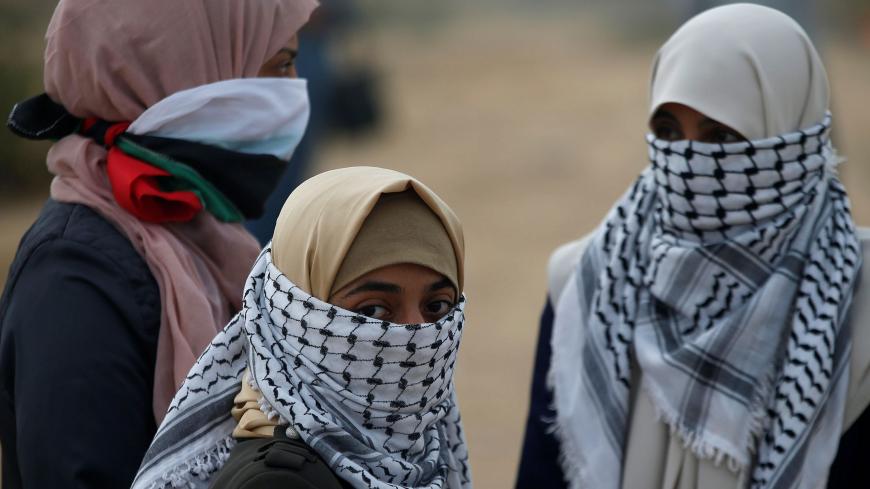 Palestinian women gather near the Israel-Gaza border during a tent city protest demanding the right to return to their homeland, east of Gaza City, Gaza Strip, April 3, 2018. - REUTERS/Mohammed Salem

Palestinian women in the Gaza Strip have established a notable presence working on the front lines of the demonstrations that began on Gaza's eastern border with Israel March 30. The protests — dubbed the Great Return March and slated to continue until May 15 — have drawn tens of thousands of Gazans, and resulting clashes have left scores dead from Israeli fire.

The Higher National Commission for the Great Return March said that until Nakba Day, commemorated on May 15, every Tuesday will be dedicated to women's activities to be held in five camps and spread across the eastern part of Gaza’s governorates.

Ektemal Hamad, head of the Women’s Committee of the Higher National Commission for the Great Return March, which includes women from all the national and Islamic factions of the Gaza Strip, told Al-Monitor, “Because women are accompanying men in the Palestinian struggle, the commission established five female subcommittees of five to 11 members each. These subcommittees are tasked with organizing activities dedicated to women during the Great Return March in the northern Gaza Strip, Gaza City, the central Gaza Strip, Khan Yunis and Rafah governorate.”

On April 10, the second Tuesday of the march, the Women's Committee of the Higher National Commission for the Return March organized near the border with Israel the “Rajin Ala Beladi” campaign ("We will Return to the Homeland"), in which women released balloons bearing the names of villages Palestinians were displaced from during the Nakba of 1948.

In the Malika camp, set up by the Higher National Commission for the Great Return March in eastern Gaza, 700 meters (2,296 feet) from the separation fence with Israel, a group of women sat in a circle and sang folk songs, thus attracting Palestinians marching to the separation fence where tires were blazing and ambulance sirens wailing.

As senior Hamas official Khalil al-Hayya was marching with the demonstrators, he saw the group of women sitting in the circle. “Palestinian women are accompanying men in the Palestinian struggle. They have set a great example during the Great Return March. They raised the Palestinian flag at the fence and threw stones at the Zionists during the protests,” he told Al-Monitor.

Women’s activities in the camps are characterized by pacifism, and they focus on ways to support men during the protests. In the same camp, another group of women prepared sumaqiya, a dish made of meat, Arabic spices, chard, a lot of sumac, flour and chickpeas, and distributed dishes to the demonstrators and families at the camp.

Yet another group of women at the camp painted kushuk (used car tires) pink, as young men cultivated small plants and decorated them using the painted tires.

In the Khuzaa camp, located east of the Khan Yunis governorate, women were also active.

“Women in the Khuzaa camp play a great role in the marches. They raise flags on the borderline, bring kushuk for men to set on fire and prepare food. They also recite poems and folk songs in the camp,” Manal al-Tabash, head of the women's subcommittee there, told Al-Monitor.

She said that the reason women in the Khuzaa camp are more active than in other areas is because of the rural character of the area and its closeness to the border.

“Women have become accustomed to agriculture, which is the main source of income in the area. Farmers have established their houses there despite the danger lurking near the border, and they got used to both the presence of the Israeli army and the shooting,” she added.

Of note, the Women's Committee honored the Palestinian girl Hind Abu Ola, 16, who became a symbol of women's struggle in the Khuzaa area after rescuing four young men who were suffocating due to the tear gas bombs dropped on the front lines of the confrontation near the border fence.

“I saw the young men fainting. I took my bag, which contained onions and a perfume I had brought from the house, and I rescued them. Then the Israeli snipers started firing at us,” Abu Ola said.

As soon as the four guys awoke, they formed a human shield to protect Abu Ola from the bullets and started running. Their picture spread across the region and became a symbol of women's participation in the protests.

Palestinian journalist Ashraf Umra documented that scene, and the picture went viral on social media. “I was worried about the reactions [to the picture] of my family and the people … but my family was so happy and proud of it,” Abu Ola said.

Ashraf al-Qadra, spokesman for the Ministry of Health in Gaza, told Al-Monitor that up until April 10, the total number of wounded women was about 84, compared to 2,850 men and 278 children.

During her participation in the march, Mariam Abu Daqqa, a member of the Central Committee of the Popular Front for the Liberation of Palestine, told Al-Monitor, “The active participation of women in the Great Return March is to be expected given the accumulation of historical efforts exerted by women. Women seize every opportunity to establish their presence during such events and change the negative perception of the role of women in Palestinian society.”

To the east of the Bureij refugee camp in the central Gaza Strip, Ibtisam Nassar, 52, sat with her daughters, sons and grandchildren in the tent that her family erected under the name “The Nassar Family.”

She told Al-Monitor, “We are participating to increase the number of participants and raise awareness among the new generation about our heritage and the history of the villages abandoned by our forefathers in 1948. We are teaching them that the right of return to the homeland is irreversible.”