Dignity and death on Gaza's border

Palestinians in Gaza risking their lives protesting on the border with Israel say living conditions have become unbearable inside the besieged enclave, which has been under an Israeli blockade since 2007. 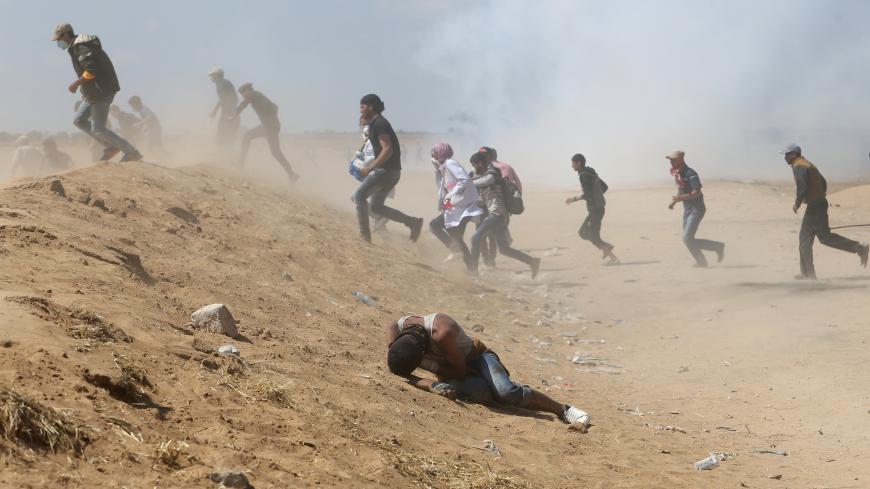 Palestinians react to tear gas fired by Israeli forces during a protest marking the 70th anniversary of the Nakba, at the Israel-Gaza border, in the southern Gaza Strip, May 15, 2018. - REUTERS/Ibraheem Abu Mustafa

MALIKA, Gaza Strip — On May 14, Palestinian young people gathered on the front line along the Gaza border in the Malika area, east of Gaza City, distributing old tires for burning during the next day's commemoration of the Nakba, the catastrophe of the Palestinians' dispossession with the founding of Israel in 1948. Thick smoke already filled the air, obscuring young people as they tried to breach the fence separating Gaza and Israel on the day the United States moved its embassy from Tel Aviv to Jerusalem.

A group of young Gazans had formed the self-styled tire-burning unit specifically for the Great Return March, commemorating year 70 of the Nakba. Members of the unit had been collecting tires for the past week in preparation, storing them in a pit some 900 feet from the fence so they could retrieve them throughout the day to keep the flames going to protect protesters by blinding Israeli soldiers’ view of the border.

The unit's work picked up beginning April 6, “Burning Friday,” when increasing numbers of Palestinians joined in the protests that began March 30, Land Day, commemorating a 1976 Israeli effort to confiscate Palestinian-owned land that resulted in deadly confrontations.

Al-Monitor visited the rear of the protest area and spoke with young men involved in the tire-burning unit. Jaafar, not his real name, a leader of the unit, said he had made his way to the fence, hiding his face with a keffiyeh and carrying wire-cutters on his shoulder. While his friends covered him by burning tires to protect him from Israeli snipers, he cut through part of the barrier, as others aggressively tugged at it, making a statement about their desire to return to their families' homeland on the other side. Israeli soldiers responded with smoke bombs to disperse the protesters and with gunfire against those in the forefront at the fence.

Having cut through the fence's wire, Jaafar told Al-Monitor, “We are here to tell US President Donald Trump that the embassy will not be moved. We will start a war against Israel, and we will continue protesting to regain the lands Israel occupied in 1948.”

He added, “We are here not only to commemorate Nakba Day, but also to revive the Palestinian cause. The world is ignoring the tragedies in Gaza resulting from the Israeli blockade, which has been ongoing for 12 years.”

Some 3,000 feet from the fence, Palestinians continued to rally, as thousands of young men and women and children flocked to the five camps built in the Awda (Return) area, on Gaza's eastern border, to protest. Standing next to Jaafar was Dia, a relief officer in the tire-burning unit. He wore an orange jacket similar to those of trained medical personnel.

Dia explained his presence at the fence, stating, “We sometimes cross to reach our occupied lands. My job is to offer relief to the injured people in the unit. I suture the wounds that the members of the unit suffer while pulling the barbed wire with their hands or feet. Dozens of young men pull the wire after one person or two cuts it.”

Ahmad, not yet a teenager, stood on a hill, hiding his face with a pink piece of cloth. “I am here because I have a piece of land in Jaffa,” he told Al-Monitor. “My kite will fly over our occupied territories and burn them. They have no right to steal our lands. I want to visit Jaffa.”

May 14 ended with 58 Palestinians killed and 2,771 injured, shot from across the fence by Israeli soldiers. By May 16, the death toll had ticked up to 62.

On May 15, protesters joined the funeral processions of those killed the previous day, starting at al-Shifaa Hospital's morgue, then to their homes to bid them a last farewell and finally to funerals and burials at noon. The masses then began returning to the front line.

Al-Monitor headed to al-Shifaa with the tire-burning unit to visit Ahmad, a fellow unit member who had been shot in the foot and was waiting, along with many others, to undergo surgery.

“I will return to the border,” Ahmed said defiantly. “Our lives in Gaza have become unlivable due to the blockade, poverty and hunger. We will either live with dignity like everybody else or die fighting on the border.”

Policemen were deployed throughout the hospital to maintain security, including constraining frustrated families waiting to have their bleeding children admitted.

“This wouldn’t have happened if it weren’t for the Arab silence and international failure,” Ahmad said. “Nevertheless, we will march on, until Trump takes back his decision to move the embassy. Jerusalem is the eternal Palestinian capital. Israel has been occupying our land for 70 years.”

The members of the tire-burning unit shared their hopes and frustrations. “My dream was to participate in Arab Idol,” Jaafar said. “I have a nice voice, and I have tried repeatedly to get a visa to leave for Canada where my uncle lives, but in vain.”

He also said, “I am from Jaffa. I hear about its beauty and its mesmerizing beach, but my family and I could never visit. I will continue to protest to free our lands and to get the chance to pray in Al-Aqsa Mosque, even if just once.”

Ahmad expressed the thoughts of many in Gaza when he said, “We want a better life. Why are Israelis enjoying our land while we sit here under siege, amid poverty and deprivation? How long will we suffer from unemployment? How can we have a future when we can’t even afford to get married or provide for a family?”

Ahmad’s mother, Samia, said, “I am not worried about my son. I encourage my five children to head to the border. My husband is unemployed, and my children cannot pursue their university education. How long will we remain refugees? When will we stop being besieged? We will keep protesting until the last drop of blood.”