Will popular pressure in Gaza lead to new clashes with Israel?

Palestinian youth are carrying out non-military activities, backed by military factions in Gaza, to pressure Israel to lift the siege, among other demands. 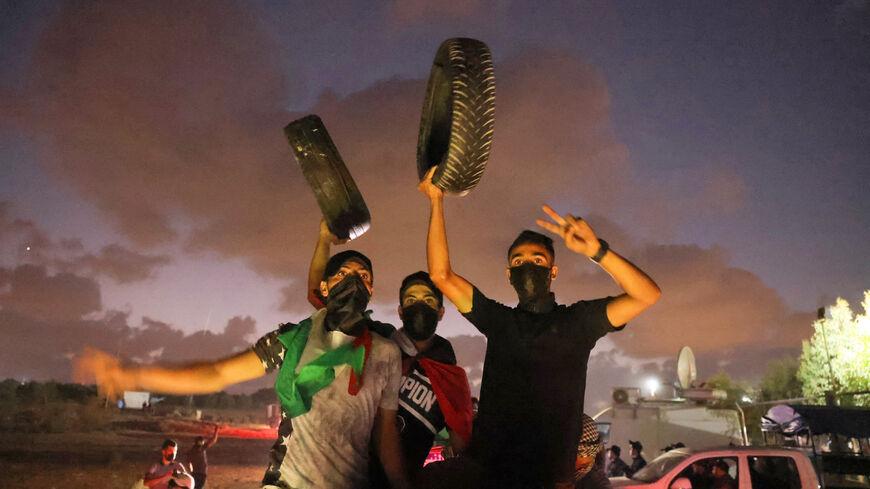 Palestinians gather on Aug. 30, 2021, during a protest along the border fence with Israel, east of Gaza City in the central Gaza Strip, demanding an end to Israel's blockade and the right of Palestinians to return to lands they fled or were expelled from when the Jewish state was founded. - MOHAMMED ABED/AFP via Getty Images

A correspondent in Gaza
September 2, 2021

On Aug. 31, hundreds of Palestinians gathered east of the Bureij refugee camp in the central Gaza Strip near the Israeli border for the fourth night in a row, as part of the night confusion protests.

At 8 p.m., a few meters from the surrounding residential houses and agricultural land, the border area turned into a battlefield. Groups of young men and women who had gathered in different places across Gaza reached the border in tuk-tuks and buses.

As they started moving tires to Jakar Street 300 meters from the border fence, 42-year-old Rami Abdel Karim wore his protective mask — not for protection from Covid-19, but from tear gas fired by Israeli forces stationed at the border.

As tires were set on fire and homemade sound bombs were thrown from the Palestinian side toward Israel, the Israelis launched flares into the sky to light the way for the snipers. Identifying targets among protesters, the snipers opened fire with tear gas and live ammunition.

Abdel Karim owned a sports equipment store before closing it due to poor economic conditions in the Gaza Strip. He was shot by an Israeli sniper during the return marches in 2018. He has since been dependent on monthly Qatari aid, which Israel has blocked since the 11-day conflict with Hamas in Gaza last May.

“We are here because we ran out of solutions and doors are shut in the face of the [Palestinian] factions. We are here to impose a new situation on the Israeli occupation so that they lift the siege,” Abdel Karim told Al-Monitor.

Tensions along the Gaza-Israel border have escalated in recent weeks due to the slow progress of talks on the Egyptian-sponsored reconstruction of the Gaza Strip after the May escalation.

Abu Omar, 30, is a leader in the Waad al-Tahrir (Liberation Promise) unit, which organizes the protesters under the joint operation room for the incendiary balloons and night confusion marches units that was established in light of the stalled talks on advancing the cease-fire reached between Hamas and Israel in May.

“Young people in Gaza have been living under an unjust siege for 15 years. Today, we are all protesting so that our people can live in freedom and with dignity,” Abu Omar, who only provided his first name, told Al-Monitor.

He said the joint operation room is operating based on a consensus among the leaders of the military and political factions in Gaza. The latter had agreed to use all popular means to pressure Israel, including holding afternoon protests at the border, holding night confusion protests and launching incendiary balloons toward Israel, Abu Omar added.

“Our tools are simple … the incendiary balloons have explosive material to burn the Zionists' crops and impose the same economic siege they are inflicting on us. During the night confusion marches, fireworks and firecrackers are used and tires are burned to express the extent of injustice inflicted on our people in the Gaza Strip," he said.

Every night, the protesters carry out their activities simultaneously across the five governorates of the Gaza Strip. According to Abu Omar, “This geographical dispersion of the night confusion marches is heard by and affects" all Israelis living near the Gaza border.

Abu Omar called on Israel to “stop delaying the lifting of the blockade on the Gaza Strip and the reconstruction process.”

Gaza's resistance factions have given the green light to the protesting groups to carry out the night confusion marches in response to the Israeli economic restriction, which Israel uses as a means of pressure on Hamas to release detained Israeli soldiers and the remains of other soldiers.

Although Israel has eased some of the restrictions imposed on Gaza in the past few days, such as allowing the entry of construction materials and opening the main commercial crossing with the enclave, the protesters and members of the night confusion units remain unsatisfied. Thus, it seems their demands go beyond lifting economic restrictions on crossings and granting work permits to Palestinians.

Abu Omar said, “Our demands are to lift the siege and injustice on our Palestinian people by building a port, opening the crossings unconditionally, allowing access to the Qatari grant as was the case before the May war, expanding the fishing space to more than 15 miles, rebuilding what the enemy destroyed during the latest conflict and allowing entry of humanitarian aid without interference.”

The intensity of the protests reached a peak after the death of an Israeli soldier on Aug. 30 after he was injured nine days earlier when a young Palestinian man, whose identity the Gaza factions refused to disclose, emerged from the crowd of demonstrators and shot him through a hole in the wall at the border.

Mustafa al-Sawaf, a political analyst close to Hamas and former editor-in-chief of the local Felesteen newspaper, said the killing of an Israeli soldier during the protests was an isolated incident amidst a generally peaceful protest. However, there appears to be real local concern for the life of the man who fired the shot out of a “heroic” impulse after a Palestinian child was injured by a soldier during the same protest on Aug. 21, he added.

Sawaf believes the operation room of the night confusion units have gained experience after years of work since the start of the return marches in 2018. They are planning strong moves at the border and trying to avoid injuries, but it appears these activities may lead to an escalation in light of the growing Israeli threats, he said.

Hamas spokesperson Abdel Latif al-Qanou told Al-Monitor, “Israeli threats to launch a military operation on Gaza are just PR and media attempts claiming heroism in front of the Israeli public. The Sword of Jerusalem battle (in reference to the May conflict) is still present, and the Palestinian people will continue their struggle until they regain all their rights.”

He added, “We hold Israel accountable for any foolish act it may commit against the revolutionary young people at the border. They have a right to participate in popular events to demand the lifting of the blockade, and the resistance will respond if these young people are harmed."