Some West Bank villages and towns have drawn inspiration from the Gaza Strip night confusion activities as they embarked on confronting settlement outposts established on their lands, and the town of Beita is now serving as a model. 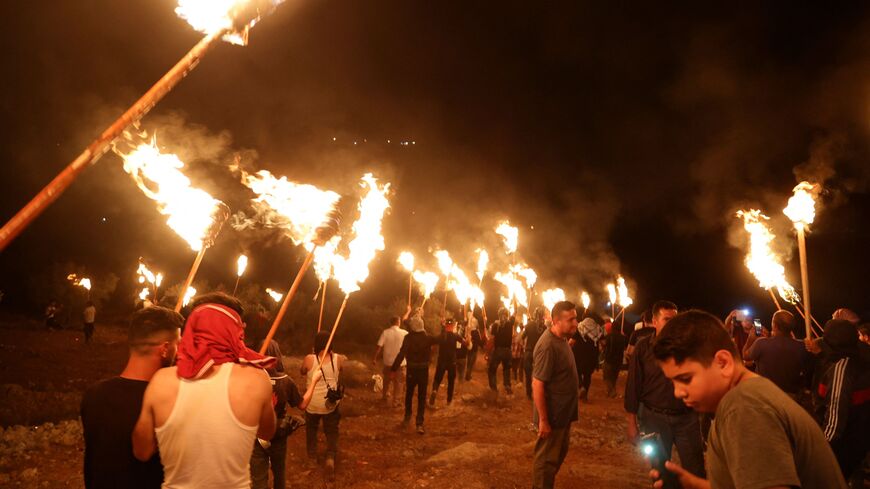 Palestinian protesters carry torches as they protest against the newly built Israeli settlers' outpost of Eviatar in the town of Beita, near the city of Nablus in the occupied West Bank, on June 24, 2021. - JAAFAR ASHTIYEH/AFP via Getty Images

As night falls, hundreds of young men head to Jabal Sbeih (Mount Sbeih) and the surrounding area in the town of Beita in the northern West Bank to start organizing various activities, including what is known as “night confusion,” which lasts until dawn.

The aim of these activities is to disturb the settlers who established a settlement outpost called Eviatar atop Jabal Sbeih.

Since the beginning of the construction of the outpost on Jabal Sbeih on May 3, the residents of Beita began to resist the settlers as they were inspired by the “night confusion” activities during the return marches that erupted in March 2018 in the Gaza Strip near the barbed wire fence with Israel.

The young men in Beita have been engaging in such activities on a daily basis.

The night confusion is a popular night protest activity during which young people use various means aimed at disturbing the settlers and confusing the Israeli army, such as igniting rubber tires near the outpost so that the smoke rises toward the army.

The deputy mayor of Beita, Musa Hamayel, told Al-Monitor that the idea for night confusion activities was inspired by the Gaza Strip protesters.

Hamayel pointed out that the night confusion activities are aimed at preventing settlers from breathing fresh air on the lands of Beita, let alone sleep calmly and reassuringly. These young people focus on two issues: polluting the air by igniting rubber tires and using horns that emit annoying and loud sounds to irritate the settlers so that Israelis “are prevented from living quietly on our land,” he added.

He said the night confusion experience helped young men come up with new resistance methods and tools, the latest of which is directing powerful light and laser beams at the outpost.

He said they also used flares, and pointed out that the night confusion activities are a continuation of the continual daylight confrontations between the young people and Israeli forces during their daily storming of the town.

Hamayel stressed that the night confusion activities are an initiative on the part of the town’s young people away from the interference or support of any parties. He said the events are funded by the young people themselves and not directed by the municipality, the Palestinian Authority or any other party.

He said the activities have attracted an unexpected turnout, as thousands from the area have been taking part on a daily basis.

“Young men in Beita are only getting a few hours of sleep," he said. "During the day they go about their day, and at night they head to the mountain to participate in the night confusion activities, and they are adamant to continue such activities until the outpost is removed.”

Night confusion depends on the work of various units the young men created. Chief among these are the rubber tire collection unit, whose mission is to collect the largest possible number of rubber tires to transport them from the town and neighboring towns to the mountain area, where they are distributed among the young people.

As night falls, a group of young men start igniting these tires, which are scattered in designated places that take into account the wind direction in order for the black smoke to reach the mountain. Subsequently, other units such as the trumpet unit start honking loud horns and using loudspeakers directed toward the top of the mountain.

These units rely heavily on another unit dubbed the monitoring unit, which monitors the Israeli army’s movements with binoculars to avoid ambushes or arrests.

The participants and press crews covering the confrontations receive meals, drinks and water, which a group of young men in the logistical support unit bring in from town.

A group of women have volunteered to prepare such meals. Also, young men in Beita or nearby villages who happen to be getting married have offered hundreds of wedding meals to these young Palestinians.

The head of the People’s Committee for the Defense of Beit Dajan, Nasr Abu Jaish, told Al-Monitor that the Popular Resistance Committees in Beit Dajan have adopted the night confusion method as a form of popular resistance in the wake of Beita’s experience in confronting settlements.

He said dozens of settlers established a settlement outpost on Mount Masyaf in Beit Dajan nine months ago. Young Palestinians then began carrying out some night confusion activities, but it was not long before such activities receded. But he said what was happening in Beita helped motivate protesters in Beit Dajan to become more active again.

The town of Beit Dajan has a weekly Friday march to protest the settlement outpost. Israeli forces suppress this march, in which dozens participate.

Abu Jaish said of the night confusion protests, “More than 500 young people have come to join these activities, up from some dozens in the first two days. The number is expected to increase with time.”

While the Palestinian Authority has adopted the idea of popular resistance in the West Bank in the face of settlements, it has remained very weak. Now, however, the young people in Beita are drawing inspiration from the experience of the Gaza Strip.

The Beita residents say they will continue their efforts until the settlement outpost is removed from the top of Mount Sbeih even if they had to resort to all means of struggle and confrontation. Since the popular resistance began in May, five Palestinians protesting the Beita outpost have been killed by the Israeli military, including two teenagers and two men in their later 20s, while hundreds have been wounded.