The Israel Defense Forces said troops fired on the crowd to disperse hundreds of Palestinians who were rioting in a village south of Nablus. 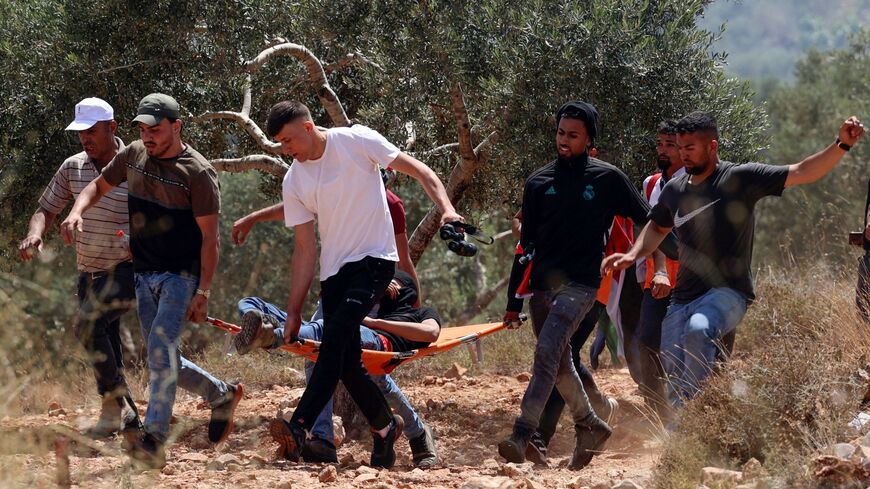 Palestinian protesters carry an injured man on a stretcher during confrontations with Israeli security forces following a demonstration in the village of Beita, south of Nablus, in the occupied West Bank on June 11, 2021. - JAAFAR ASHTIYEH/AFP via Getty Images

A Palestinian teenager was killed Friday when the Israeli army open fire on an anti-settlement demonstration in the West Bank, Palestinian health officials said.

The Palestinian Red Crescent said, "Mohammad Said Hamayel, 15, died in clashes" near Beita, a village south of Nablus. The Palestinian Health Ministry also identified Hamayel as the victim and said six others were wounded when Israeli forces opened fire on the crowd.

The Palestinian news agency WAFA reported the Palestinian teenager is the third resident of the village to be killed by Israeli gunfire in the past month.

Quoted by AFP, a spokesperson for the Israel Defense Forces said troops responded “with riot dispersal means and fire towards the rioters,” hundreds of whom were protesting, hurling stones and setting tires on fire.

Residents of Beita have been demonstrating on Fridays to protest an illegal settler outpost called Evyatar, which The Times of Israel reports has grown rapidly in the past two months to include roughly 40 buildings. Under a “demarcation order” issued by the IDF, Evyatar settlers are banned from additional construction and all are ordered to leave the site by next week, the outlet reports.

Some 475,000 Israelis are estimated to live in West Bank settlements. Most of the international community consider settlements constructed in territory captured during the 1967 war as illegal and a threat to the Palestinian-Israeli peace process.

The teenager’s killing in Beita on Friday comes a day after two Palestinian services officers and a suspected militant were shot dead in an exchange with undercover Israeli special forces.