Beita has been the site of regular protests against an unsanctioned Israeli settler outpost in the area. 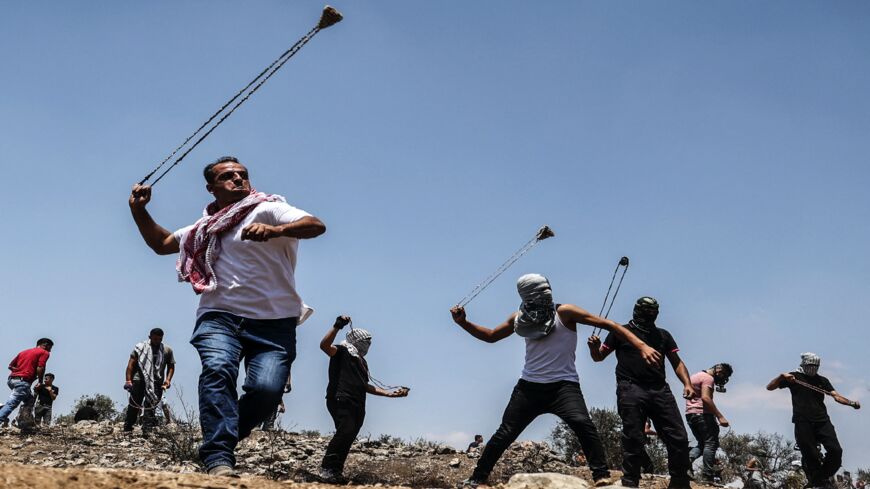 Palestinian protesters hurl rocks at Israeli forces during confrontations with them in the town of Beita, near the occupied West Bank city of Nablus, opposite the Israeli outpost of Evyatar, on July 16, 2021. - JAAFAR ASHTIYEH/AFP via Getty Images

A Palestinian municipal employee was shot dead by Israeli forces in a central West Bank town on Tuesday night. Protests have been ongoing for weeks in Beita due to a dispute over an Israeli settlement.

Shadi Salim, 41, was shot near the entrance of the town, which is south of the Palestinian city of Nablus. Salim, who was a water technician, was in the town to open its main water supply. There were no protests at the time of his death and Israeli soldiers evacuated his body in an ambulance, the Palestinian Authority’s official WAFA news agency reported on Wednesday.

The Israel Defense Forces said that a Palestinian man was shot after advancing quickly toward soldiers holding an apparent iron bar, The Times of Israel reported Wednesday. Israeli and Palestinian authorities regularly dispute the details of deadly incidents in the West Bank.

Protests began in Beita in May in opposition to the construction of an Israeli settler outpost named Evyatar in the area. Demonstrators have been carrying torches and lighting fires on tire to disturb the settlers. In late June, Israel’s new government led by Prime Minister Naftali Bennet ordered the settlers to leave. The agreement also specified that Evyatar would be turned into a military zone. The conflict was a significant test for Bennett’s ideologically diverse government. Bennett himself has supported Israeli West Bank settlements throughout his career.

Demonstrations in the area have continued since the leave order. Last week, a Palestinian teen was killed by Israeli gunfire at a protest.

Israel has built hundreds of settlements in the West Bank since capturing the territory from Jordan during the 1967 war. Some Israelis also live in makeshift outposts that are not sanctioned by the government. Many such residents are religious Zionists who disagree with the Israeli state.