The commission of the Great March of Return announced a sixth gathering point for daily protests at the border with Israel after talks between Israel and Hamas failed. 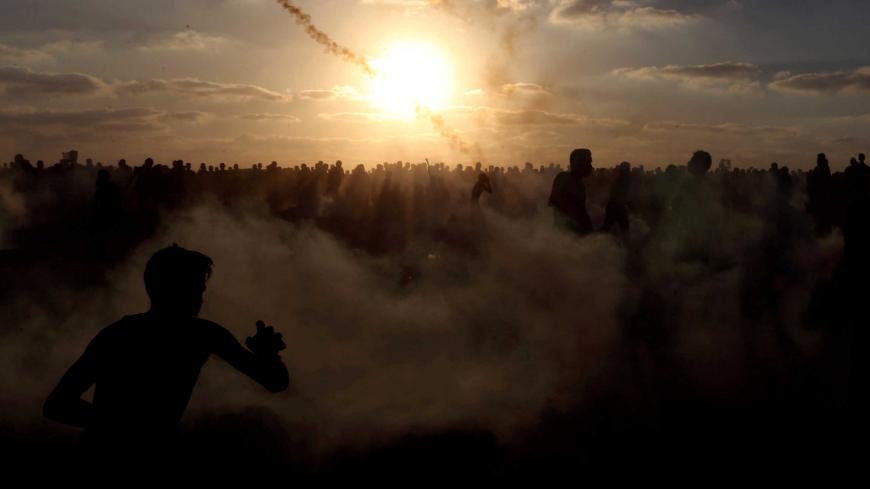 Palestinians at the Israeli-Gaza border fence run from tear gas during a protest calling for lifting the Israeli blockade on Gaza and demanding the right to return to their homeland, Gaza Strip, Sept. 21, 2018. - REUTERS/Ibraheem Abu Mustafa

GAZA CITY, Gaza Strip — In the past two weeks, as Egyptian-sponsored talks between Israel and Hamas faltered and the security situation remained tense, the organizers of the Great Return March called for increased activities at the Gaza-Israel border.

After Hamas postponed talks with Israel on Aug. 26, the High Committee of the Great Return March and Breaking the Siege called for the resumption of daily demonstrations at the Gaza border with Israel. The protests, previously held daily between March 30, when they began, and the end of May, had lost momentum in the past three months, only taking place on Fridays.

On Sept. 21, Hamas and the Islamic Jihad began mobilizing residents of refugee camps in eastern Gaza to boost turnout at the protests. More than 10,000 people have so far heeded the call. The protesters are demanding the right of return for Palestinian refugees and the lifting of the Israeli siege imposed on Gaza in 2007.

A Sept. 20 Islamic Jihad statement asserted, “The popular participation in the Great Return March and Breaking the Siege sends a clear message to the world on the eve of the United Nations General Assembly’s meeting. The message is that the Palestinian people are determined to restore their right to live on their land. The voices of the people are louder than the sound of bullets shot by those who want to oppress us, their terrorist politics, and the aggression that the occupation [Israel] exercises against us.”

Hamas spokesperson Abdullatif al-Kanou told Al-Monitor, “The Great Return March and Breaking the Siege will continue with determination, and it will expand using new techniques and strategies until it achieves its goal.”

Kanou additionally claimed, “The marches intensified and gained more support as the occupation [Israel] failed to lift the siege on Gaza and adopted a strategy to waste time, which will not bring stability to the border.”

Meanwhile, Ibrahim al-Madhoun, a political analyst close to Hamas, told Al-Monitor, “The coming days will witness big crowds and inventive methods of protest at the Gaza border,” adding, “The protests will push all international parties and Egypt to activate the cease-fire talks brokered by Egypt.”

The High Committee designated northwest Gaza near the coast, the Zakim area, as the gathering point for Monday protests starting Sept. 10. Previously, protesters had only been gathering at five places in eastern Gaza. Beit Hanoun, in the east, is expected to be designated as an additional assembly site. Nighttime protests, again at the eastern border, have also been added to events for the first time. They got off to a sporadic start on Sept. 11, but were soon being called on a daily basis.

Committee member Talal Abu Zarifa told Al-Monitor, “The Zakim area was chosen because it is the closest to the Israeli army. We also want the naval siege lifted. The world has to know that Gaza has the right to have a port linking it to the world.”

About the demonstrations, Abu Zarifa stated, “The protests intensified in the past two weeks after the Great Return March witnessed a slowdown in past weeks, at the request of regional and international parties, in order to pave the way for Egyptian-sponsored talks.”

He continued, “When the world turned its back on the demands of the protesters, the committee decided to expand the scope of the marches and the strategies they use. It also increased the number of protest locations and activities at the Israeli border throughout the week.”

Abu Zarifa, noting that no one is stepping forward to try to resuscitate the Hamas-Israel talks, stated, “If regional and international actors do not listen to the calls of the protesters, the rules of the game will change, and the international community and the UN will have to bear the consequences.”

On Sept. 16, the High Committee launched the eighth Naval March, a protest “march” of small boats from the Gaza shore to the blockade at the nautical border, the first of which was held two months ago. Meanwhile, protesters resumed sending incendiary balloons from the eastern Gaza into southern Israel. Hamas leader Khalil al-Hayya said at a press conference on Aug. 30, “We [have] stopped launching incendiary balloons in order to foster a positive environment for successful talks through Egypt and the UN. However, we can launch many of them if the siege continues.”

Ali, who participates in the nighttime protests, told Al-Monitor, “A group of young men known locally use Facebook to call for the revolutionary marches to invade the border at night and cut the barbed wire. The gathering starts after evening prayers at the predetermined meeting points.” A number of buses, motorcycles and tuk-tuks collectively then move from the assembly points to the border, Ali said.

Hundreds of youths are taking part in these marches. Ali explained why they have been dubbed Perturbation Night Marches, stating, “We have loudspeakers at night that sound like the sirens at the border, so the army mistakes them for the sirens that accompany the launch of missiles from Gaza. That way, we perturb the army with our march and cut the barbed wire at the border.”

Protests are also being held each Tuesday at a new location close to the Erez crossing between Gaza and Israel. The High Committee launched protests there on Sept. 18 under the banner “Together for Protecting the Rights of Refugees and Breaking the Siege.” Hundreds took part.