Will Israel enforce the truce agreements prior to election?

The fact that Israeli Prime Minister Benjamin Netanyahu failed to form a government and awaits the new election’s outcome has raised questions on whether he will implement the truce understandings with the Palestinian factions. 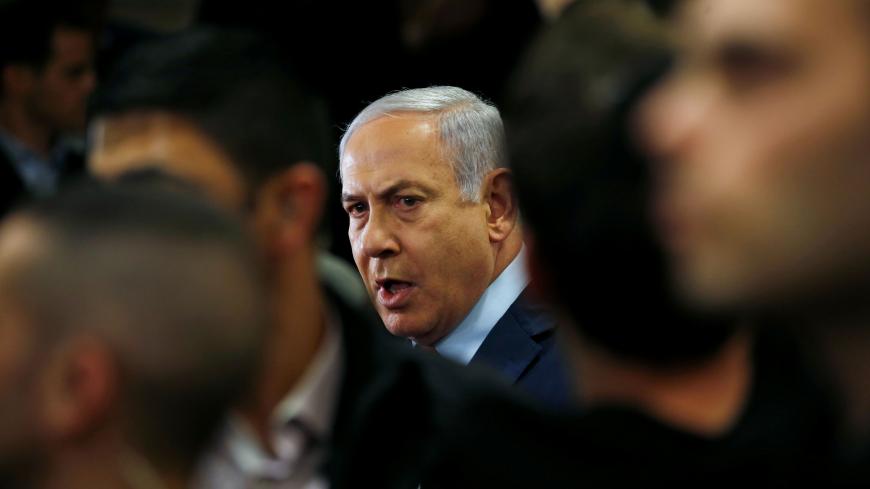 Israeli Prime Minister Benjamin Netanyahu speaks to the media at the Knesset, Israel's parliament, in Jerusalem, May 30, 2019. - REUTERS/Ronen Zvulun

Netanyahu, who leads the right-wing Likud party, won the April 9 elections without, however, securing enough seats in the Knesset to form a government. This being said, he was forced to build a right-wing governing coalition. The differences he has with the other political parties, however, prevented him from doing so and made him the first prime minister-elect to fall short to form a coalition in Israel's history.

Heading toward the new Israeli election, scheduled for Sept. 17, raises questions on the fate of the truce agreement Israel and the Palestinian factions in the Gaza Strip, led by Hamas, reached.

Most recently, an Egyptian, Qatari and UN-sponsored agreement was reached May 6 between Israel and Palestinian factions, following the escalation round May 3-6 that resulted in the death of 31 Palestinians and damaged 830 housing units. It also killed four Israelis and wounded dozens in the rockets the Palestinian factions fired at southern Israel.

The May 6 agreement provides for the implementation of the understandings agreed upon in late October 2018, Israel allowing the entry of $30 million in Qatari funds to the Gaza Strip, the opening of the border crossings between Israel and the Gaza Strip, and extending the fishing zone for Gazans to 15 nautical miles. In return, the Palestinian factions will stop launching incendiary balloons from the Gaza Strip toward southern Israel, keep Palestinian protesters off the border area and halt nighttime activities near the border.

According to Arabi 21 website on May 31, military expert Ron Ben-Yishai wrote in Israel’s Yedioth Ahronoth that he expects Hamas leader in the Gaza Strip Yahya Sinwar to "further challenge Netanyahu, and found it more likely that the latter turns a blind eye to the incendiary balloons and nighttime activities held near the fence separating [Israel] from Eastern Gaza, as long as a new round of rocket attacks is prevented.”

Arabi 21 also reported him as stating that “Hamas and Islamic Jihad had anticipated a large-scale Israeli military operation against the Gaza Strip following the formation of the new Israeli government." Based on that, "failing to form a government was a positive for the two movements,” according to Arabi 21.

Ben-Yishai wrote, “Regardless of the Israeli army’s intention to fight in Gaza or the Israeli strategic objectives of such an operation, Sinwar knew right until [May 30] at night that he needs to be keen not to provoke Israel and to pressure the factions to commit to the calm and allow the talks to carry on."

Arabi 21 said Ben-Yishai indicated that “following the vote on the Knesset dissolution and edging for new elections, I believe that Sinwar sat in his chair and told himself that nothing is going to happen this summer because Netanyahu will not risk a land offensive that would cause losses and anger the world, which could have an impact of the votes he needs in the upcoming election.”

He added, “The Israelis residing along the border with the Gaza Strip will pay the price as their fields will continue to be set ablaze and rockets are fired in their direction. For them, the new election does not seem to bode well.”

Speaking to Al-Monitor, Hazem Qassem, a spokesman for Hamas, said “the mediators [Egypt, Qatar and the United Nations] need to follow up on the enforcement of the understandings reached with the occupation, no matter the situation when it comes to the Israeli government and regardless of whether Netanyahu failed to form a government.”

“Our people are capable of forcing the occupation to break the siege of the Gaza Strip and honor its commitments to the truce understandings via the continuation of the Marches of Return and various activities, as well as the resilience of our people amid the Israeli restrictions and siege," he added.

Qassem warned that every new Israeli attack on the Palestinian people will be faced with a response that would commensurate with the crime Israel commits.

Speaking to Al-Monitor, Talal Abu Zarifa, a member of the Higher National Commission for the Great Return Marches, does not “expect Netanyahu to make any concessions or incentives that would ease the siege on the Gaza Strip, as this would have a negative impact on the Israeli election and cause him to lose many votes.”

He said, “Netanyahu may lead a new aggression on the Gaza Strip and avoid implementing the truce understandings with the Palestinian factions as part of new electoral publicity. Based on that, the international community and the Egyptian mediator need to act to require that Israel honor its commitment to lifting the siege.”

Abu Zarifa pointed out that Israel failing to honor its commitments, which were reached via Egyptian, Qatari and UN mediation, would imply boosting the Return Marches on the border with Gaza.

Talal Awkal, a Palestinian political analyst, told Al-Monitor that “Israel will not commit to the truce understandings and will avoid them in the near future because of Netenyahu failing to form a government. The next few days are more likely to witness a limited military escalation between the two sides.”

He expected the Higher National Commission for the Great Return Marches to "activate its marches along the border in response to Israel failing to honor its commitments to the Gaza Strip as part of the truce agreement. An option that would force [Israel] to go back to the understandings with Hamas.”

Awkal indicated that “Qatari, Egyptian and UN mediators are expected to arrive in the Gaza Strip in the upcoming period with the goal of ensuring a truce on the border until the new Israeli election is held.”

Former editor-in-chief of the local Felesteen newspaper Mustafa al-Sawaf told Al-Monitor, “I don’t think the occupation will commit to the truce agreement with Hamas. The upcoming days are expected to see an escalation between Gaza and the Israeli army, whether via the Return Marches or a limited military escalation.”

Sawaf perceives that Egypt, Qatar and the United Nations will seek in the upcoming future to safeguard the truce between Israel and the Gaza Strip. But first, he added, they need to require that Israel lift the siege of the Gaza Strip.

If the mediators fail to require that Israel honor its commitment to the truce understandings with the factions, the Great Return Marches will be reactivated on a wider scale along the border and via harsher tools, Sawaf said. Also, the factions’ military wings will respond to any Israeli attack on Gaza.