Abbas’ revenge against Hamas, US, Israel

Israeli officials believe that a decision by Palestinian President Mahmoud Abbas to reimpose sanctions on Gaza is meant to entangle Israel and Hamas in a military adventure. 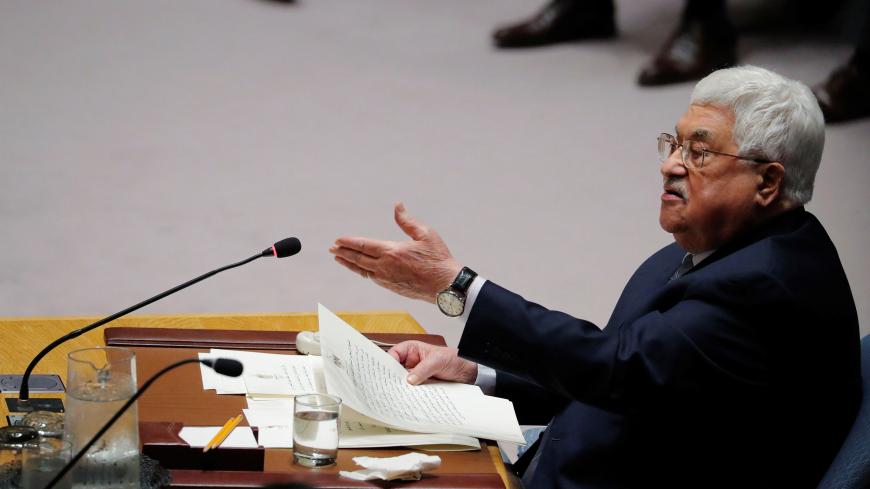 On March 19 at Palestinian Authority headquarters in Ramallah, President Mahmoud Abbas delivered a tirade rife with frustration against the United States and Israel, including cursing at the US ambassador to Israel. Even before Abbas’ harangue, Israel knew he had decided to again impose punitive sanctions against Gaza and its 2 million Palestinian residents. Israeli intelligence and military analysts have been studying Abbas’ no-holds-barred behavior of recent weeks, as he slings arrows every which way seemingly without regard for their consequences.

“He is under tremendous pressure that makes him adopt irresponsible, verbal populism,” an Israeli defense official told Al-Monitor, speaking on the condition of anonymity and adding that Abbas' most recent utterances against senior US officials suggest extreme despair.

Abbas currently faces a dead end: No horizon for a diplomatic agreement with Israel, no prospects of engineering a UN vote on the establishment of a Palestinian state and dim hopes of implementing the reconciliation agreement with Hamas. All is lost. Adding Abbas’ deteriorating health to this makes for a bitter, angry man with nothing to lose.

On Jan. 14, Abbas delivered a diatribe against Donald Trump, cursing the US president with the Arabic epithet “May God demolish your house.” This week he called US Ambassador David Friedman a “son of a dog.” Abbas has never used such choice words in his 13 years at the helm of the Palestinian leadership, but his undiplomatic language does not appear to be a slip of the tongue. The cursing has been planned as a calculated bid to appease Palestinian public opinion, which, as he well knows, is fed up with his leadership and ineffectual policies.

Abbas opted for the invective against Trump and Friedman to signal to Fatah activists — who also believe he has reached the end of his political road — that he still has what it takes to confront the biggest, strongest world power, the one that promised him the “ultimate deal” but has let him down time after time. Aside from the “street” rhetoric, useful for venting anger, Abbas also has a clear goal meant to settle the score with his enemies: Israel, Hamas and the United States.

“His revenge plot is very transparent, and he makes no effort to hide it,” said the Israeli defense official, referring to the new sanctions against Gaza and its rulers from Hamas that Abbas announced in his speech. “Everyone can see that he wants to entangle Israel and Hamas in a military adventure from which he thinks he will emerge strengthened. That will be his revenge and his lifeline, he hopes.”

In his March 19 speech, Abbas also referred to the apparent attempt on the life of Palestinian Prime Minister Rami Hamdallah in Gaza. “I could have arrested 20 people and executed them in the town square, but we are patient and responsible, not like Hamas,” he said. The Israeli source cautioned that Abbas' assertion of patience should be taken with a large grain of salt. “If his plan succeeds and Gaza burns once again, instead of 20 people that he supposedly preferred not to hang, many others will pay with their lives,” the source said.

A day before Abbas’ Ramallah speech, Israeli Defense Minister Avigdor Liberman had disclosed the measures planned by Abbas, whom Liberman views as an obstacle to any peace negotiations with the Palestinians. “Abu Mazen [Abbas] is clearly going to stop all funding for the Gaza Strip, including payments for its power, water supply, health services and wages,” Liberman said in a TV interview with Hadashot News, adding that Abbas was intent on sparking a military confrontation between Hamas and Israel.

Heightened tensions have been palpable in recent days along Israel’s border with Gaza. As Ben Caspit wrote March 19 in Al-Monitor, Israel is concerned about what he called “May Madness,” given that Trump’s policies will be tested on various fronts that month, with implications for Israel’s security. The Gaza front appears to be the most sensitive and threatening of them all.

For March 30, the eve of the Jewish Passover holiday, Hamas has planned the Mass March of Return to mark Land Day — commemorating Israel’s expropriation of Arab lands in the Galilee in 1976 —and is calling on Gaza residents to protest along the border fence. That event is designed as a rehearsal for the real thing: widespread protests Hamas has called to mark Israel’s 70th Independence Day, May 14-15 (according to the Georgian calendar, with Israel’s official celebrations taking place according to the Hebrew calendar April 18-19), the Palestinian Nakba Day (“nakba” is Arabic for “catastrophe”) on May 15 and the scheduled move of the US Embassy to Jerusalem on May 14.

Hamas is hoping that tens of thousands will head for the border fence, and Israel is preparing for violent clashes and bloodshed. Defense officials are certain that a clash is unavoidable. The only question is how many casualties will result from the “days of rage” Hamas has planned toward realizing its political goals. The movement is preparing to encourage masses of Palestinians to climb the fence, be the cost as it may. The more desperate they are, the more they are likely to head for points of friction with Israel and clash with its troops. They will have nothing to lose.

Israel’s defense establishment believes an angry and humiliated Abbas plans to ride this wave and try to use it for his own purposes. His decision to punish Hamas and make life for Gaza’s residents even harder was adopted in consultation with his confidant and close associate Majid Fara, the head of Palestinian intelligence. Abbas rarely makes a significant operational or diplomatic decision without involving his trusted ally.

The sanctions Abbas announced will enter into force immediately. They will result once again in the suspension of wages to PA employees in Gaza, greater hardship for the enclave’s barely functioning hospitals and severe power cuts. In a few weeks, as the mass march nears, Gaza is expected to be under a blackout. This will give the Palestinians additional cause to rise up and set out for the border fence, with Hamas cheering them on so it can shift responsibility for its central role in their plight and Abbas using their plight for his own political means.