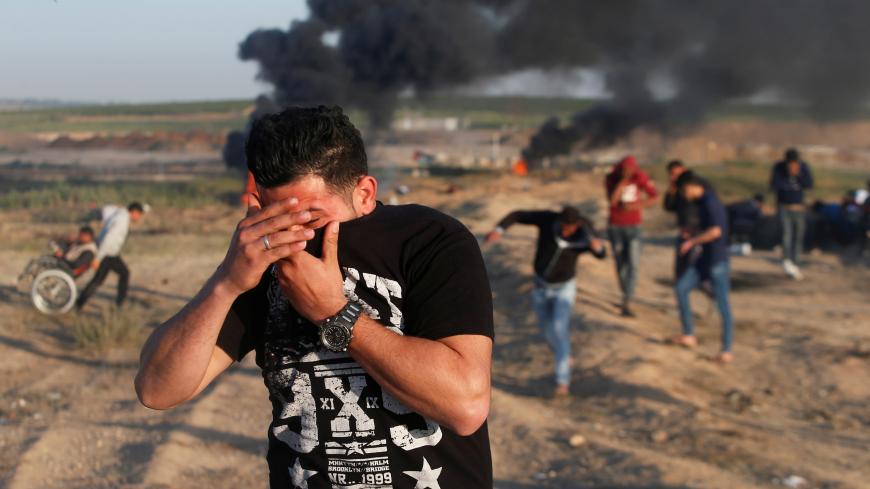 Palestinians react from tear gas fired by Israeli troops during clashes at a protest at the Israel-Gaza border demanding their right to return to their homeland, east of Gaza City, Gaza Strip, April 1, 2018. - REUTERS/Mohammed Salem

Shlomi Eldar reports that the Israeli defense establishment was feeling “nervous” in advance of the "Great Return March" protest, including an unusual threat by the Israeli Coordinator of Government Activities in the Territories warning the owners of 20 Gaza bus companies that "you and your families will be held personally responsible" if their buses brought protesters to the border.

UN Secretary-General Antonio Guterres, the European Union and international human rights organizations have called for an independent investigation into violent clashes at the Gaza fence March 30, when as many as 30,000 Gaza residents demonstrated against the Israeli blockade. Fifteen Palestinians were killed and as many as 1,000 injured by the Israeli military. On March 31, the United States blocked a draft UN Security Council statement calling for an investigation.

While Hamas and the Palestinian Authority have claimed that Israel responded with live ammunition against protesters who were not armed with anything more than stones and tires, the Israeli government has responded that its forces were hit by Molotov cocktails and that most of those killed or injured were linked to Hamas, which Israel considers a terrorist organization.

“Israeli soldiers did what was necessary,” Israeli Defense Minister Avigdor Liberman said April 1. He added, “I think all our soldiers deserve a medal. … As for a commission of inquiry — there won't be one."

Hamas had planned the Great Return March on March 30 as a show of both force and desperation in the context of a crisis in Palestinian leadership and the alarming economic and humanitarian conditions in the Gaza Strip, as foreshadowed by Eldar’s column on March 29, as well as reporting by Al-Monitor’s Palestinian Pulse columnists and a recent UN report.

The “working assumption” in the Israeli security establishment, Eldar writes, “is that faced with an internal crisis, Hamas is exploiting the plight of Gaza residents to enter into conflict with Israel. Nevertheless, even with tensions in the south rising, softer voices are also emerging from Hamas.”

Those "softer voices" include remarks by Salah al-Bardawil, a member of Hamas’ political bureau, on March 20, who said that his organization “is ready to engage in a dialogue with the US administration to achieve the aspirations of the Palestinian people in obtaining their rights, establishing a Palestinian state and lifting the siege on Gaza,” Ahmad Abu Amer reports.

“Al-Monitor contacted several Hamas officials, but they all refused to comment on this issue," Abu Amer adds. “They noted that Bardawil’s statements reflect the movement’s official position, but they also stressed that they were neither contacted by the US administration for dialogue nor invited to attend the donor conference held at the White House mid-March. On the contrary, Hamas criticized the conference, which it described as a US attempt to absolve Israel of Gaza's humanitarian and economic problems caused by the Israeli blockade imposed on Gaza since 2007.”

The demonstrations occurred at a crisis in relations between Palestinian President Mahmoud Abbas and Hamas. Daoud Kuttab explains that Abbas’ remarks to the Palestinian leadership on March 19 “revealed an unhinged leader no longer willing to be politically correct. … Israeli and international media paid a great deal of attention to an insult that the typically reserved Abbas hurled at David Friedman, the US ambassador to Israel. The speech also revealed a vindictive leader who apparently has no problem punishing the entire Gaza Strip for the March 13 attempted assassination of Prime Minister Rami Hamdallah and General Intelligence Service chief Majid Faraj. Six people were slightly injured when one of two roadside bombs hit Hamdallah's convoy as it entered Gaza.”

Abbas said March 19, “In my capacity as the president of the Palestinian people, and having borne all that I can bear for the sake of unity of the homeland, which was rejected by Hamas and its illegal authority, I have decided to take national, legal and financial actions to preserve our national project. I am confident that the people of Gaza will always support the national project and the higher national interest.”

Kuttab adds, “Abbas’ direct and indirect threats against Hamas not only dealt a blow to the fragile Palestinian reconciliation effort, but also risked a dangerous escalation.”

UN Special Coordinator for the Middle East Peace Process Nickolay Mladenov warned the UN Security Council March 26, "Illegal settlement expansion and related activities continue, further threatening the viability of the two-state solution and eroding the prospects for peace," and "Violence and incitement continue to fuel hatred, division, distrust and fear, and continuing terror attacks on Israelis as well as the recent assassination attempt on the Palestinian prime minister exemplify the growing risk of destabilization and the empowerment of radicals and extremists.”

According to a United Nations publication, a March 16 report by Mladenov warned specifically that the Gaza Strip “continues to present the greatest risk of escalation alongside an acute humanitarian crisis with the potential for a complete breakdown in service delivery. … The report also stresses the need for a changed political reality on the ground, including the resumption by the Palestinian Authority of its full responsibilities for the people, governance and infrastructure of Gaza. Hamas, a Palestinian faction, must cease its military build-up, including the construction of tunnels and the firing of rockets towards Israel, while Israel’s closure regime must fundamentally change to allow for the recovery and development of the Strip through movement and access of people and goods.”

“It is no coincidence that the military wing of Hamas decided that this week it would hold its largest military drill ever,” Eldar concludes. “Almost all of Gaza's residents have seen or at least heard these maneuvers, involving all of the Hamas armed forced as well as the militants of various other Palestinian factions. Rockets were fired into the Mediterranean and mortars and guns were fired in the air. Though the gunfire came from light arms, it was so intense that it set off Israel's Iron Dome missile defense system. … The Israeli security establishment estimates that Hamas now has some 30,000 troops serving in its various security forces, including the Izz ad-Din al-Qassam Brigades and the Nuhba units, trained to operate in Hamas' network of tunnels. These forces can’t really threaten Israel, but they can interfere with day-to-day life in the country. Hamas has few options left.”