The Turkish government has been compelled to change track under US pressure and the need to undo the international perception that Turkey supports the Islamic State. 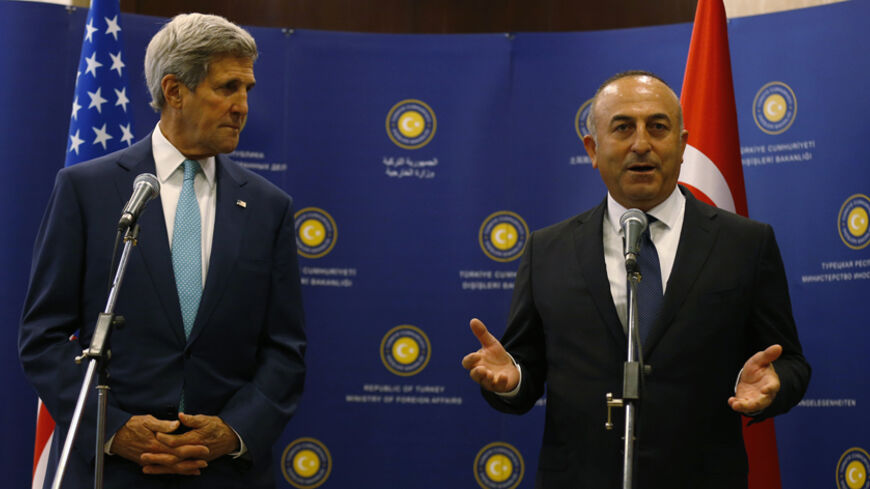 Relations between two major NATO allies, the United States and Turkey, have suddenly assumed a new dimension over Kobani. The last phase of the Kobani crisis has been tragic for Turkey. While Prime Minister Ahmet Davutoglu gave the impression that he was in favor of heeding the Kurds who were demanding a corridor for military and humanitarian assistance, President Recep Tayyip Erdogan continued to rattle them by alleging that the Democratic Union Party (PYD), the most powerful Kurdish Syrian political actor, and its military arm, the People's Defense Units (YPG), were terrorist organizations.

On Oct. 18, on his way back from Afghanistan, Erdogan told journalists accompanying him, “Something is going around nowadays. To give weapons support to PYD and with those arms open a new front against [the Islamic State] there? OK, fine, but for us at the moment, the PYD is the same as the [Kurdistan Workers Party] PKK. It, too, is a terror organization. Support for it from our NATO ally America would be very, very wrong. We cannot say yes to such a move.”

For the president, the situation was clear. The PYD was a terror organization and one could never give it weapons. But very recently, Turkish officials received Salih Muslim, co-chair of the organization that Erdogan defines as terrorist, and discussed the situation with him. Meanwhile, the US approach was totally contrary to Turkey’s position. Muslim, who met with US Special Envoy to Syria Daniel Rubinstein in Paris on Oct. 12 and on Oct. 18 in Dahuk, met with US Deputy National Security Adviser Tony Blinken and his delegation. Muslim told the Americans that the PYD was ready to fight the Islamic State (IS) beyond Kobani. This was an important commitment for the United States, which is still searching for a ground force to fight IS.

Erdogan learned about this change in the US approach 20 minutes after his plane landed in Istanbul, in a phone call from President Barack Obama. Obama informed Erdogan about the weapons assistance to Kobani. Erdogan’s press adviser said, “Erdogan and Obama have agreed to continue with their close cooperation to reinforce the joint struggle against IS.” Shortly after the call, at dawn, three US C-13s airdropped 27 loads of weapons, ammunition and medical supplies west of Kobani. A few hours after the US Central Command confirmed the operation, Turkey’s intransigence cracked at another point. Kurdish Rudaw TV reported that the Turkish government had agreed to the request of Kurdistan Regional Government President Massoud Barzani to open a corridor and send peshmerga forces to Kobani. This was followed by a statement from Turkey’s Foreign Minister Mevlut Cavusoglu, who said, "We are helping to support the transfer of peshmerga forces to Kobani."

US Secretary of State John Kerry said that it would be "irresponsible" not to help those fighting IS in Kobani in what was interpreted as an allusion to the discord with Turkey.

Turkey’s reservations over support for Kobani's Kurds are based on their links to the PKK and the government’s condition that the international coalition expand its anti-IS operations to the Syrian regime. But developments are not permitting Turkey to hold onto its conditions.

The government is under pressure from four quarters to change its position:

On Oct. 15, Iraqi Kurdistan's parliament approved a bill recognizing Rojava and extending all possible assistance to it. This bill, introduced by the Patriotic Union of Kurdistan and the Goran Movement, was a firm call for Barzani to put aside his traditional animosities.

Although it is not yet known whether the corridor will be used, Turkey’s agreeing to such a plan could be interpreted as a move to influence the Kurdish front. Ankara seeing the Syrian Kurdish National Council get closer to Barzani, as a political instrument that could be used as pressure on the PYD, is now hoping that the peshmerga at Kobani could constitute a military balance with the YPG. The peshmerga’s appearance on the Rojava stage would make things a bit easier for Turkey, which could see such a presence as a means to counterbalance the PKK/PYD.

Such back steps could help alleviate some of the tension, but they might not be enough for the AKP government, with its vacillations and obsessions, to win over the Kurds and change the international perceptions.

It won’t be surprising if there is no follow-up to the corridor declaration. Deputy Foreign Minister of Kobani canton Idriss Nassan told Al-Monitor, "There has been no shipment of weapons or transfer of peshmerga from the corridor. All that happened was the US airdrop of ammunition.”

Turkey’s symbolic steps backward do not mean the end of its conflict with the United States. Erdogan, who of late has frequently linked the United States' Iraq-Syria policy with oil, said Oct. 21, “You are so worried about Kobani, but you don’t have the slightest concern for other cities. There is nobody left in Kobani now. If Kobani is strategic, then it is strategic for us, not for the United States. That is why the measures we take are important.”

It was US State Department deputy spokesperson Marie Harf who, in her Oct. 20 news briefing, made it clear that the United States doesn’t share Ankara’s view of the PYD. When reminded of Erdogan’s remarks equating the PYD with the PKK as a terror organization, she said, "The PYD is a different group than the PKK legally, under United States law.”

“So you believe the PYD is not the same as the PKK?” she was asked again. Harf replied: "They are not the same under United States law. No."