Tensions over IS resurface in Turkish-US ties

Ankara opposes US-supplied weapons going to Syrian Kurds, but has no power to prevent it and has failed to convince Washington that Kobani is of no strategic value. 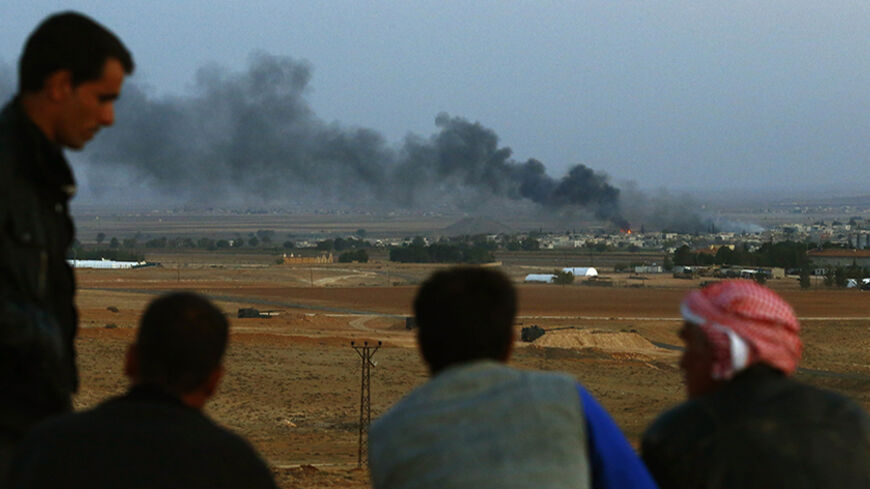 Turkish Kurds watch as smoke rises over the Syrian town of Kobani, from a hill near the Mursitpinar border crossing, on the Turkish-Syrian border in the southeastern town of Suruc in Sanliurfa province, Oct. 24, 2014. - REUTERS/Kai Pfaffenbach

Ankara and Washington insist officially that there are no differences between them concerning the situation in Syria, in particular over the fight against the Islamic State (IS). All signs, however, indicate otherwise.

Tensions between the two have resurfaced over the question of US arms supplies to the Kurdish Democratic Union Party (PYD) in Syria to help it fight IS. Washington has air-dropped arms to the PYD despite disapproving grumblings from Ankara, which has been trying, to no apparent avail, to prevent this from happening because it considers the PYD to be a terrorist organization.

According to Western diplomats, remarks by Erdogan after some of the airdropped weapons apparently ended up in IS hands have fueled Washington’s anger toward Turkey. Erdogan told reporters Oct. 22, before flying to Latvia for an official visit, “The mistake can now be seen. Some of the weapons that they dropped from C-130s may have gone to the PYD, but who did some of it also go to? It went to IS, which has been broadcasting this for days over its website by opening and showing those cases.”

Pentagon spokesman Rear Adm. John Kirby had acknowledged to reporters during an Oct. 21 press briefing that one of the weapons bundles might have gone astray, but the bulk of them got into the right hands.

“It is no wonder that the Americans are furious over remarks that appear to gloat over a technical mishap that might not have happened if Turkey was more helpful in the first place,” a Western diplomat, who wished to remain anonymous due to the sensitivity of the topic, told Al-Monitor. “If [Erdogan] is not prepared to assist on a matter that has united a significant number of countries, many of them Turkey’s allies, then he should at least refrain from statements that aid IS propaganda.”

An Oct. 23 Reuters report, which said Washington's patience with Turkey was wearing thin, cited unidentifed US government officials expressing their belief that Turkey was “playing a double game” in Syria. According to the story, “The official said that the United States believes that Turkey’s ruling [Justice and Development Party] has long had a policy of covertly seeking accommodations, if not actually trying to ingratiate itself, with Islamist groups.”

Ankara rejects such allegations, but there is a clear difference in emphasis between the United States and Turkey about who the real threat is. By claiming that the PYD and the Kurdistan Workers Party (PKK), which Ankara considers a terrorist organization, are the same thing, Erdogan makes it evident who he thinks the main threat is to Turkey.

Erdogan said, prior to flying to Latvia, that he had informed President Barack Obama, during a phone conversation Oct. 19, that support for the PYD and the PKK was “unacceptable for Turkey.” Erdogan also said he could not understand why Kobani was so important for the United States, asserting that there were no civilians remaining there, only fighters.

Take, however, the flip side of Erdogan’s question: If Kobani has no strategic value, as he suggests, why then is IS so desperate to gain control of the town? Such statements by Erdogan reinforce claims that having IS in Kobani is preferable to Ankara than having the PYD there.

I asked Dogu Ergil, a well-known Turkish academic, columnist and expert on the Kurdish issue, if Ankara’s policy — which was clearly predicated on preventing Syrian Kurds from gaining autonomous political status — were sustainable. He said, “It is not sustainable for the simple reason that Turkey is not the sole player anymore. Ankara is faced with a Kurdish equation today that has multiple players.”

What about Turkey’s chances of having a say in future developments relating to the Kurds in the region if ties with Washington remain strained as they are currently? Here, Ergil pointed to the mistakes the Turkish government has made with regard to the Kurdish question, particularly in the peace process with Turkey’s own Kurds, a process that Ergil says has little public support. He said there are many actors today involved in the Kurdish issue as a result of these mistakes.

“It is obvious that the role of these actors will increase due to Turkey’s inability to come up with the right policies. Having the United States as a main arbiter in this equation will also result in loss of influence by Ankara as far as this matter is concerned,” Ergil said.

Ergil's observation is corroborated by Turkey’s inability to convince Washington that the PYD is the same as the PKK, which the United States also considers a terrorist organization.This was made apparent by US State Department deputy spokeswoman Marie Harf during her Oct. 20 daily news briefing. In response to a question, Harf stated emphatically that the PKK and the PYD “are not the same under United States law.”

Harf’s response to another question, about Turkish consent regarding weapons supplied to the PYD, also underlined Ankara’s weak position. “It’s not about consent. We notified them — the president and the secretary [of state] did — of our intent to do this and had discussions with them about why we believe this is an important thing to do in this fight against [IS] around Kobani,” she said.

Trying to allay the impression that Turkey is not doing anything to help the Kurds in Kobani, Erdogan informed reporters, before flying to Latvia, that it was he who had suggested that Turkey open a corridor for peshmerga from northern Iraq to enter Syria to fight IS. He said he had made the suggestion to Obama as an alternative to providing arms to the PYD.

This suggestion, however, has been marred by confusion. Foreign Minister Mevlut Cavusoglu openly declared recently, “Turkey is helping the peshmerga so it can go to Kobani.” It has become clear since that statement, however, that no peshmerga has yet entered northern Syria via Turkey, and it is not clear if and when any will do so.

The matter has caused controversy in Turkey. The military in particular is said to be unhappy about a corridor being opened for the peshmerga, especially after the recent agreement reached in Erbil, the capital of Iraqi Kurdistan, between various Kurdish groups to join forces against IS.

Sources close to the military told Al-Monitor that the Turkish armed forces continue to have a severe allergy to any military cooperation with Kurds, fearing that the PYD and the PKK will ultimately benefit from it. The idea of an autonomous Kurdish entity along Turkey’s long border with Syria continues to also be anathema to the Turkish military.

Brig. Gen. Ertugrul Gazi Ozkurkcu, head of the chief of staff’s press division, refused recently to respond to questions about Cavusoglu’s remarks that passage was being provided to the peshmerga. Ozkurkcu said such questions should be referred to the Ministry of Foreign Affairs, since it was the source of the statements concerning a corridor for the peshmerga. He refused further comment although the matter deeply concerns the military.

Meanwhile, the daily Cumhuriyet reported on Oct. 22 that the General Staff wants authority to deepen the military-controlled restricted area on Turkey's side of the border with Syria. The corridor reportedly being proposed for the peshmerga is said to fall within this area. This suggests that the military wants a “cordon sanitaire,” where it can fully control forces entering and exiting Turkey. If the military complicates assistance to Syrian Kurdish fighters, it will exacerbate tensions between Ankara and Washington and further reduce Turkey’s influence over developments on its border.